(Minghui.org) Today's news from China includes incidents of persecution that took place in five cities or counties in five provinces, where at least 14 practitioners were recently persecuted for their belief. 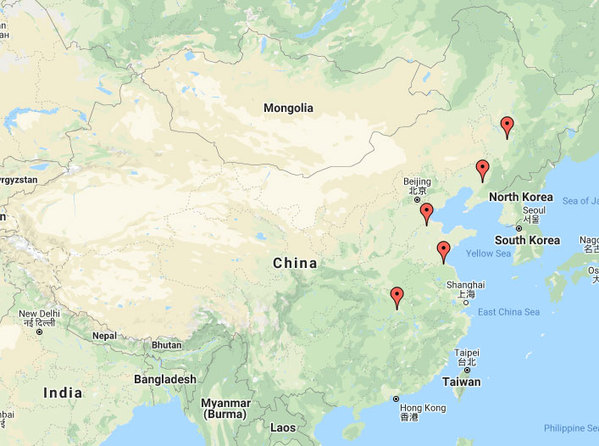 Mr. Wang Shuangmu from the Ganyu District was sentenced to a one-and-a-half-year prison term in October 2017, for filing a criminal complaint against Jiang Zemin, the former head of the Chinese Communist Party. Mr. Wang was incarcerated in the Hongzehu Prison. After accounts of the torture he endured in prison was published on the Minghui website, he was arrested again in July 2019. He was tried in late 2019 and early 2020, and is being held in the Ganyu Detention Center.

Mr. Song Jia’en was arrested for planning to go to Beijing to file a complaint about the abuse he has been subjected to during the persecution. He is also being held in the Ganyu Detention Center.

Ms. Lin Xianghua, in her 70s, from the Qiaokou District, was reported to the police on the afternoon of February 14, 2020, for distributing information about Falun Gong. She was arrested.

The police took her to the Hanshuiqiao Street Police Station for interrogation. They photographed her and took her blood samples. Ms. Lin returned home that afternoon.

Seven practitioners were arrested on July 22, 2019.

Ms. Wang Suzhen was sentenced to a two-and-a-half-year prison term. She has appealed.

Ms. Bai Jing, Ms. Xu Yuanhua, and Ms. Qiu Guixiang were released that evening because of their age.

Mr. Liu Yuan was detained for 15 days, and returned home on August 6.

Ms. Guan Huishu and Mr. Zhu Kewei were held in custody for over three months, and returned home on November 1.

Ms. Xiao Yongfen was sentenced to a seven-year prison term. She passed away in the Changchun Women's Prison (also known as Lanjia Women’s Prison, or Jilin Province Women’s Prison) on January 31, 2020. She was cremated on February 1.

“A New Understanding of “Overcoming Myself””