(Minghui.org) The Art of Zhen Shan Ren International Exhibition was held in Offenbach, Germany, from February 5 to 25, 2020. Attendees were moved by the righteousness, courage and hope displayed in the paintings.

The exhibition has been held in more than 300 cities and more than 50 countries around the world. It has won support from elected officials, human rights organizations, and other artists.

The exhibition in Offenbach was held with the support of Offenbach City Council Member Oliver Stirböck and Mayor Felix Schwenke. Various city government meetings were held in the conference hall beside the exhibition hall, and attendees had the opportunity to view the paintings. Many of them commended the exhibition.

Admiring the Power of Belief

Anne Teubert attended the opening ceremony of the exhibition. “Some paintings move you to tears,” she said. “The CCP is brutally persecuting people who believe in Truthfulness-Compassion-Forbearance. It is hard to tolerate.”

Ms. Teubert said it could be difficult for normal people to imagine how the CCP brutally treats people who hold different views. She hoped that Falun Gong practitioners would hold fast to their belief.

Heinz-Jürgen and Erna Weydmann, a retired couple who live in Offenbach, were given a flyer about the exhibition by a Falun Gong practitioner and decided to attend the opening ceremony. After talking to practitioners, they bought a copy of Zhuan Falun, the main book of Falun Gong, so they could start to learn the practice.

The exhibition left a deep impression on them. Mrs. Weydmann said she felt Falun Gong practitioners' faith had empowered them to face the persecution. She hoped practitioners would keep up their courage and faith. 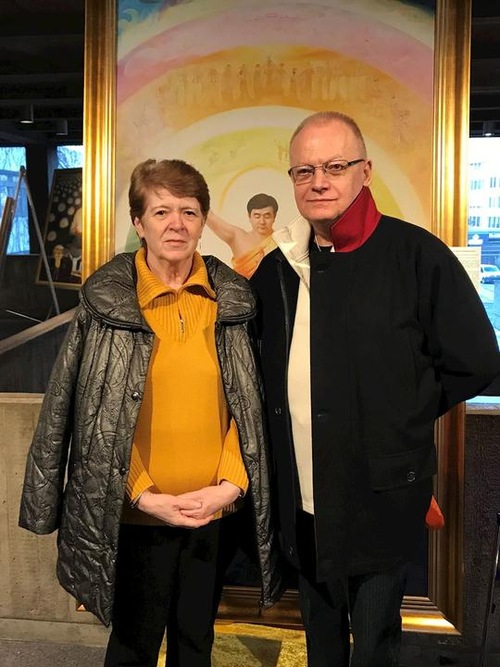 Admiring the Courage of Practitioners

Marie Cavelier, a painter from France, attended the opening ceremony with two of her friends. She said the painting titled “Who I am” was her favorite. The young lady depicted in the painting is relaxed, pure and extraordinary.

After seeing all the works, Ms. Cavelier said that while such a large group of people were persecuted so cruelly, the world did not know what to do. “I am sad and angry,” she said. “How come humans can be so cruel?”

“Falun Gong practitioners still adhere to their faith facing the persecution,” she said. “This is quite courageous. Although they face the danger of detainment and torture, they still distribute leaflets to resist the persecution.” 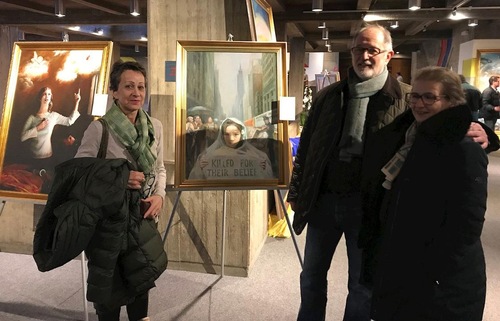 Marie Cavelier (left) and her friends Joachim Heine and Marie-Louise Heine at the exhibition. (Elke, Minghui.org)

Joachim Heine is an engineer at a large company. “The inhumane persecution shown in these paintings can only occur in China controlled by a totalitarian regime. It is horrible.” He hoped there would be immense change in China.

His wife Marie-Louise Heine is retired. She used to be an English and French translator. She said the persecution was horrible and inconceivable for her. She commended Falun Gong’s principles of Truthfulness-Compassion-Forbearance.

Anita from Offenbach and Jasmin from Frankfurt looked at all of the paintings. Anita said she had two kinds of feelings. One was that she was shocked at the persecution of Falun Gong in China, and the other was that she felt a strong light and righteous power from the paintings, which was much bigger than the evil forces.

“This is the power shown in this art exhibition,” she said. “I can feel the very positive power behind this group of people. When I walk out of this exhibition, I feel like I'm ascending [spiritually].” 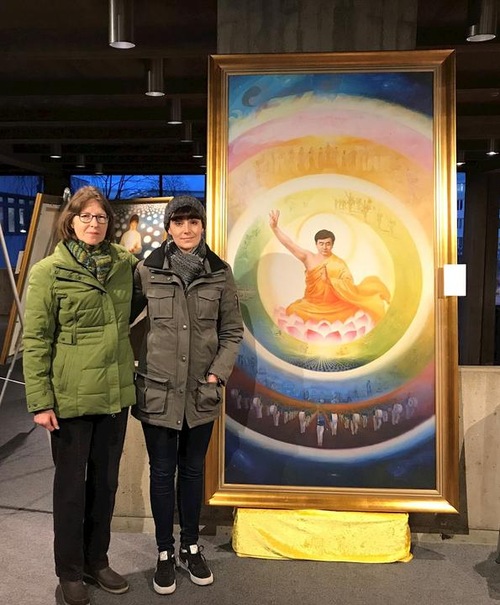 Anita (left) and Jasmin at the exhibition. (Elke, Minghui.org)

Jasmin said that she had experienced goodness and strength from the exhibition and that the paintings give people hope. On one hand, the works show the cruelty of persecution; on the other hand, they show the courage of practitioners.

“The faith of the practitioners shows its grace,” said Jasmin. “Despite their suffering in the persecution, they are still full of hope and strength, and continue to adhere to their faith.”

““Someone Has to Step Forward and Tell the Truth””

“Urgently Saving People During the Pandemic”