The nation’s largest health, wellbeing, and natural therapies expo attracted dozens of exhibitors and more than 10,000 visitors to the Brisbane Convention and Exhibition Center between February 28 and March 1, 2020. 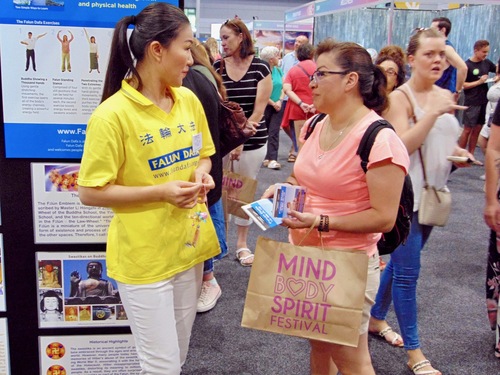 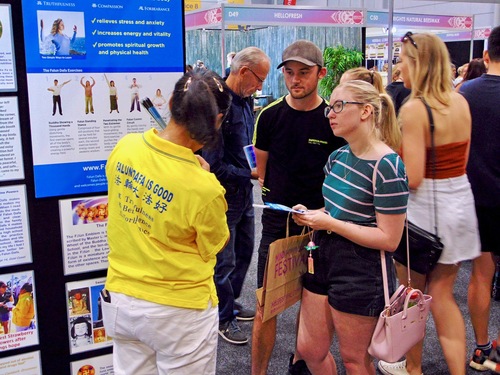 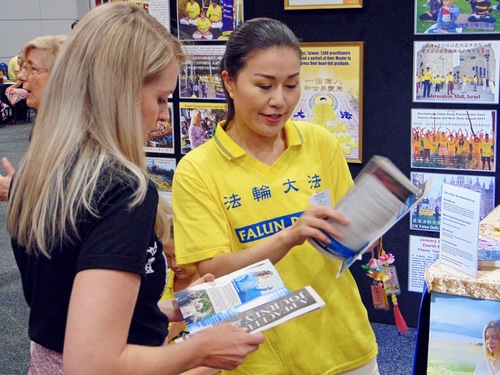 Practitioners set up an information booth with the Peaceful Journey of Falun Dafa photo exhibition displayed on the walls, the latest edition of the Minghui Report Magazine, Falun Dafa books, folder paper lotus flowers, and other information about the spiritual practice.

Fliers were handed out and practitioners spoke to passersby about how they had benefitted from Falun Dafa. They also told how the group’s immense popularity in China led to the Chinese communist regime persecuting it for more than 20 years. They regularly demonstrated the five exercises.

A Canadian chiropractor, Stewart, who was exhibiting at another booth, could not resist the opportunity to learn the Falun Dafa exercises at the expo. He quickly learned all five exercises and commented afterward that he could feel several waves of positive energy while doing the movements. He could not believe he had never heard of Falun Dafa before that day. 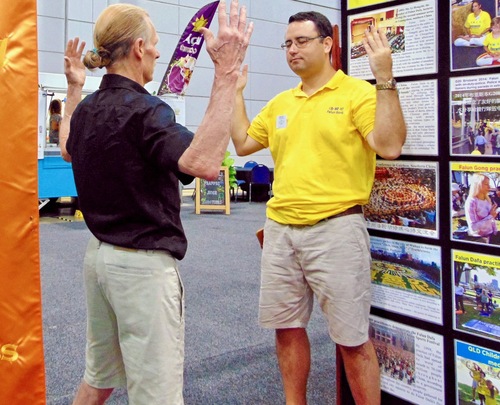 Stewart was interested in ordering a copy of the book China Falun Gong, the introductory text about Falun Dafa, and promised to contact the volunteers who run his local practice site after returning home to Victoria, British Columbia. He was given a paper lotus flower, which in traditional Chinese culture symbolizes peace and tranquillity. He hugged the practitioner who had taught him the exercises.

Shanae, a beautician from Kingaroy, was so inspired by the beauty of Falun Dafa that she quickly offered to help others in the agricultural town have the opportunity to experience the practice. She collected fliers and other information from practitioners and promised to keep in touch with anyone who was interested in learning Falun Dafa.

Connie, the Age of Aquarius Festival organizer, was pleased to meet with practitioners after having welcomed Falun Dafa for many years to her annual community event formerly held in Southport. She mentioned that the lotus flower given to her by practitioners many years before needed to be replaced, and she was very pleased to receive a shiny new lotus flower.

A young woman mentioned that she had seen the local practice site in the Southbank Parklands and had started to learn the exercises. She was pleasantly surprised to run into Falun Dafa practitioners at the expo, and thought it was a positive sign that she should diligently continue.

Several people from China visited the booth and took the opportunity to find out more about Falun Dafa and the ongoing persecution in their home country. One fellow exhibitor mentioned that her relatives back home in China often seemed to be influenced by the country’s state-controlled media. She said she spent a lot of time explaining the facts about a variety of issues, including the persecution of Falun Dafa. She enjoyed speaking with practitioners so much that she visited the Falun Dafa booth several times throughout the day.

At times the Falun Dafa booth was so busy that the practitioners ran out of fliers. More than 2500 fliers were handed out during the three-day event.

“The Power of Dafa: The Life-Changing Experience of a Mother and Daughter”

“Reflection and Hope Amid the Coronavirus Pandemic”