(Minghui.org) Today's news from China includes incidents of persecution that took place in 9 cities or counties in 8 provinces, where at least 13 practitioners were recently persecuted for their belief. 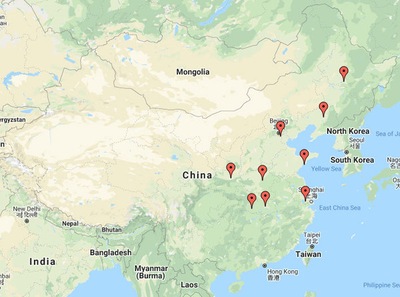 Ms. Li Fangfang is being held in the No. 10 Team, No. 7 Ward of Liaoning Province Women's Prison. She was kept in solitary confinement after practicing the Falun Gong exercises, and her hands were cuffed behind her back. She is unable to walk properly, and is being constantly monitored by two designated inmates, who were ordered to restrict her movements.

Mr. Yu Chunsheng was arrested on June 19, 2019, and his case was turned over to the Yuhong District Court. Mr. Yu's whereabouts are unknown.

Police found her on surveillance videos. They ransacked Ms. Li's home on the afternoon of January 13, and confiscated photos of the founder of Falun Gong, Falun Dafa books, a notebook computer, printed materials, and audio players.

Ms. Li is being held in Xuchang City Detention Center.

Mr. Tong Mingyu from Harbin City, Heilongjiang Province, was sentenced to prison in Beijing. He was then taken back to Heilongjiang, and held in Tailai Prison.

He went on a hunger strike after arriving there. Mr. Tong was force-fed for extended periods of time, and was recently transferred to Qiqihar Prison, also known as Fengtun Prison.

Ms. Wu Xingying, 73, and her husband were arrested at home by officers from Huangdai Town Police Station on the morning of May 10, 2019.

Ms. Wu was tried by the Wujiang District Court on January 17, 2020, and is being held in a detention center.

Mr. Li Xingjun was arrested on the ground floor of his mother’s apartment building by plainclothes officers from the Domestic Security Division and Ximen Police Station, who were staked out there, on the afternoon of August 28, 2019.

The officers ransacked his home, and confiscated Falun Dafa books, a computer, and other personal belongings. Mr. Li’s wife Ms. Sun Jiangyi, was arrested at the same time.

Mr. Song Zhi is being held in Xi’an City Detention Center, and his family has not been allowed to visit him. His case has been turned over to the Procuratorate.

They all appealed to the Wuhan City Intermediate Court, which upheld the original verdicts.

Mr. Chen Hong was arrested on the morning of January 22, 2020, for talking to people about Falun Gong.

Ms. Liu Rulan, 70, from Jiaozhou City, was arrested at her workplace by officers from Zhongyun Police Station on the afternoon of October 15, 2019. She is being held in Pudong Detention Center. Her case was turned over to the Huangdao District Procuratorate on January 2, 2020.

“Distinguishing Between Sickness Karma and Persecution”

“How My Classmate Recovered from the Wuhan Coronavirus Within Two Days”