London: Raising Awareness of the Persecution of Falun Gong in Chinatown

They demonstrated the Falun Gong exercises, distributed fliers and collected signatures for a petition asking the UK government to help end the human rights abuses in China. They explained to people about the benefits of practicing Falun Gong and explained the campaign by the Chinese Communist Party (CCP) of the persecution against practitioners in China. 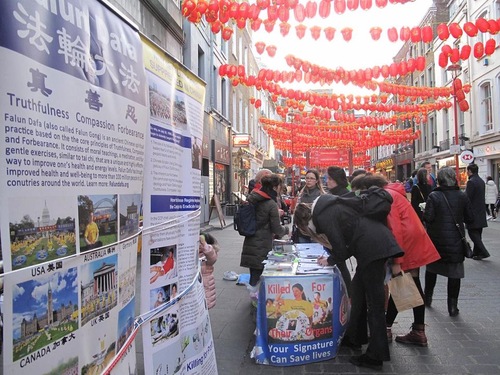 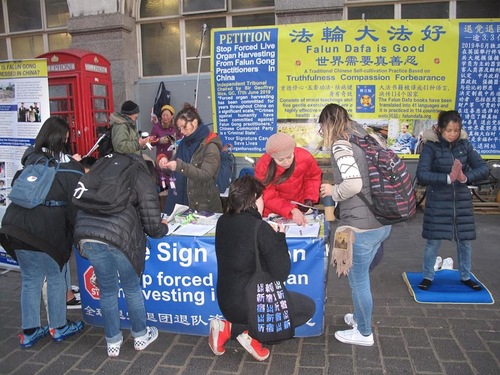 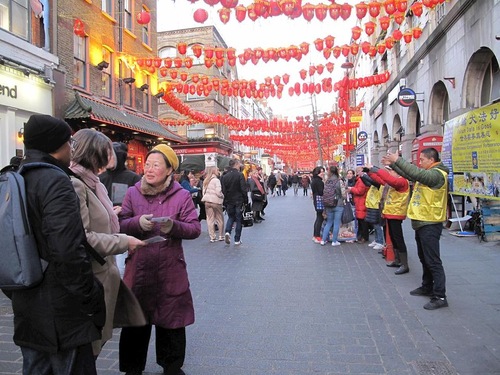 Falun Gong practitioners demonstrated the exercises, distributed fliers, and talked to the public about the persecution in London's Chinatown. 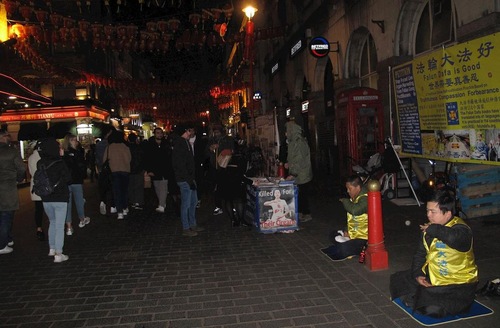 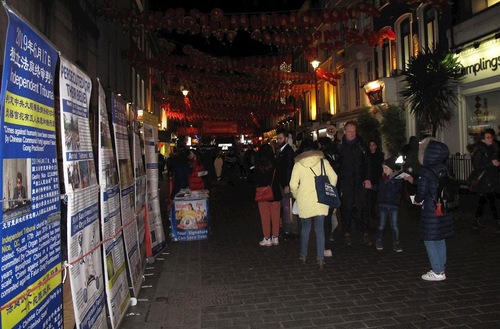 Awareness-raising efforts continue into the evening.

Susan and her husband Ian are from Cambridge and were visiting London. They paused to watch practitioners do the Falun Gong exercises and read the information boards. 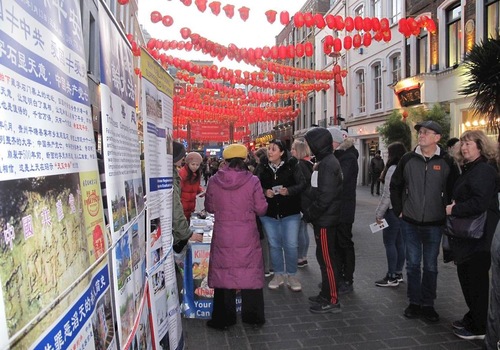 Susan and Ian pause to learn more about Falun Gong.

“I think it is sad, enlightening, and thought-provoking,” Susan said after a Falun Gong practitioner explained more facts about the 20-year-long persecution.

Susan said that she had heard of the CCP's state-sanctioned organ harvesting from living Falun Gong practitioners, but she said it was her first time to link the victims of these horrible acts with the peaceful practitioners in front of her eyes.

After hearing that Falun Gong teaches people to follow Truthfulness-Compassion-Forbearance, Susan said, “This is positive and brings hope to people.”

Ian encouraged practitioners to continue their efforts. “I think more people should hear your voice. Changing the current plight needs faster spreading of the information; keep up the good work.”

They both signed the petition calling on the UK government and international community to help stop the CCP’s persecution and the live organ harvesting.

“China Is a Police State” 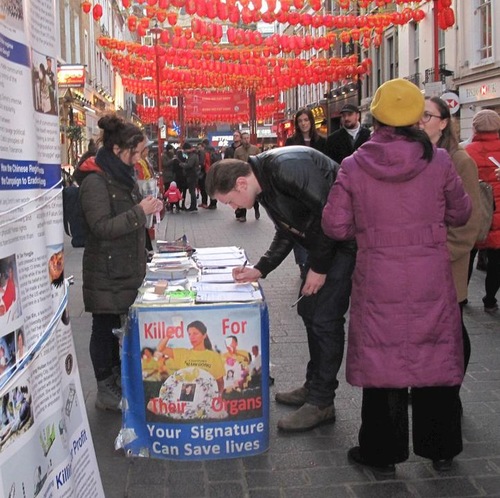 Jack signs a petition urging the UK government to pressure China to stop the persecution.

Jack has traveled to China and had heard of Falun Gong before, but he had not seen the Falun Gong exercises before, nor had he spoken with practitioners face-to-face.

After learning more about the persecution, he was happy to sign the petition. He was shocked that the CCP has persecuted Falun Gong for 20 years.

Jack said he understood the nature of the CCP. “Communism is an extreme dictatorship. It has the whole of Wuhan City under lockdown. You can imagine there are many entrances and exits for a city. China is a police state,” he said. 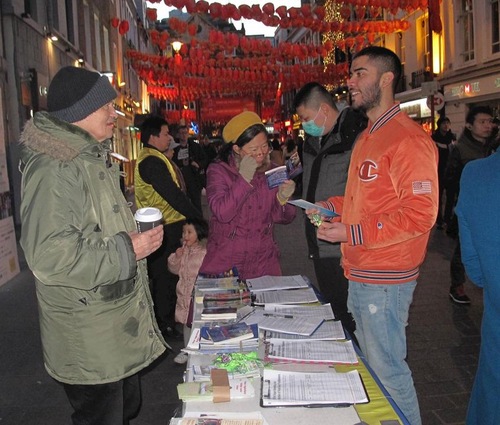 Two college students majoring in politics signed the petition. One of them was from Taiwan and the other one was from Mexico. A practitioner recommended the Nine Commentaries on the Communist Party to the student from Taiwan, who said he wanted to read it.

A practitioner named Tony chatted with the student from Mexico, “Falun Gong is a great practice. I started practicing it over 10 years ago. Falun Gong saved my life,” Tony said.

“I Hope My Signature Can Help” 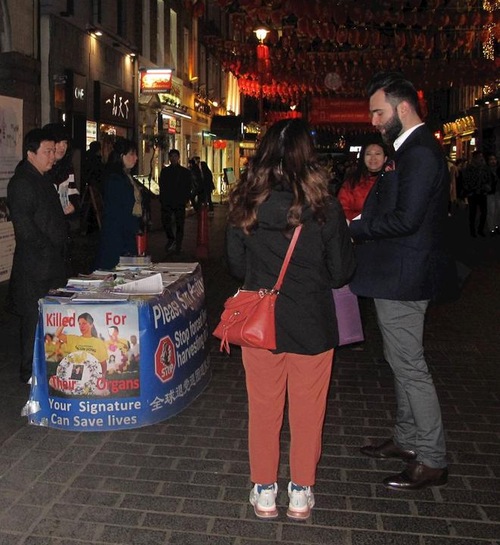 Michael from Romania works in London. “People are persecuted for their belief,” he said, “I stopped to learn more about this.”

He praised practitioners’ peaceful efforts to protest the persecution and signed the petition.

“I come from a former communist country. I know how bad the Communist Party is. My family was persecuted,” he told practitioners.

He wished more people would understand the threat that communism poses to the world. He said that one’s belief must not be determined by a government.

Falun Gong practitioners have been continuing their truth-clarification efforts in London's Chinatown throughout the winter. They distributed nearly 15,000 fliers on January 25 and 26, the first two days of the Chinese lunar new year.

Practitioners have added some information about the Wuhan coronavirus pandemic from The Epoch Times and NTD Television to their audio broadcasts in Chinatown. A practitioner named Jack, who has clarified the truth in Chinatown for many years, said he noticed Chinese visitors have become more friendly to practitioners over the last two weeks, since news of the virus broke.

Jack said he wished more Chinese people would openly recognize the nature of the CCP and quit their Party memberships so that they could have a safe future.