(Minghui.org) Today's news from China includes incidents of persecution that took place in 5 cities or counties in 3 provinces, where at least 29 practitioners were recently persecuted for their belief. 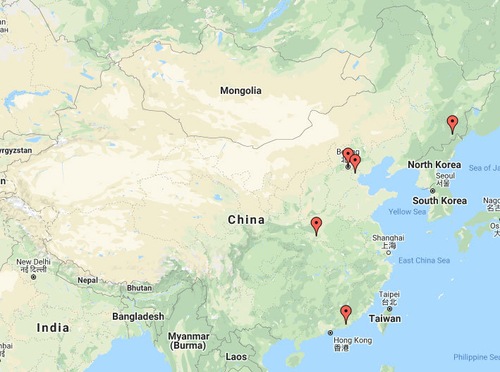 Ms. Zheng Yawen was arrested at a hotel in Xinjiang Uyghur Autonomous Region by police officers from Yanji City and Helong City, Jilin Province, in March 2019. She was brought back to Yanji, and sentenced to a four-year prison term.

Mr. Li Chunhua from the Shunyi District was arrested by officers from Renhe Police Station on the morning of January 8, 2020. His home was ransacked. He was taken to Nihe Detention Center two days later.

Mr. Peng Huisheng, 56, was arrested by Qian Zhanjiang and other officers from Xinan Criminal Police Squadron, Sanshui District, Foshan City, on January 21, 2018. He was held in Sanshui Detention Center, and was later sentenced to a six-year prison term. He was taken to Beijiang Prison, Shaoguan City.

Mr. Peng recently developed severe lung disease. His family were told to visit him in the prison.

Over 130 Falun Gong practitioners have been arrested by the Nanyang City police since April 2019.

About 15 people, including residential police officers from the Northern District of No. 3 Courtyard of Dagang Oilfield, personnel from the residential committee, and officers from Gangdong Police Station, broke into Ms. Cui Yanqing’s home and ransacked it on the morning of January 15, 2020. They confiscated photos of the founder of Falun Gong, Falun Dafa books, a computer, cell phone, and over 18,000 yuan in cash.

Ms. Cui was arrested, and taken to the police station. She was released late that evening.

“A Collection of Persecution Cases: Professionals Targeted or Persecuted to Death in 2019 for Practicing Falun Gong”