(Minghui.org) Today’ news from China includes incidents of persecution that took place in 7 cities or counties in 5provinces, where at least 10 practitioners were recently persecuted for their belief. 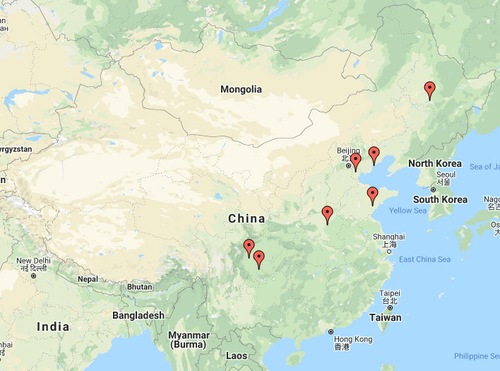 Mr. Yu Ziming, 64, was arrested at home by officers from Longchang City First Police Station on the morning of January 2, 2020. While the officers were ransacking his home, another practitioner came and was also arrested.

An officer grabbed Mr. Yu’s hair and smashed his head against the wall. The right side of Mr. Yu’s face immediately became brushed and swollen, and a lump appeared on his forehead.

Both practitioners were taken to the police station and interrogated. They were released that afternoon.

Ms. Qi Qinglian was arrested in Zhongbei Town on February 25, 2019. She was sentenced to a two-year prison term in December.

Ms. Liu Xiuzhen was arrested by Zhang Guoqiang and three other plainclothes officers from Gangxi Police Station on the afternoon of January 11, 2020. Ms. Liu is being held in the Criminal Division Detention Center of Nankai District Police Department.

Mr. Dong Guigang from Zhaojiazhuang Village, Linjiacun Town was arrested on August 7, 2019. His home was ransacked. He was secretly sentenced to three years and three months in prison by Gaomi City Court.

Mr. Dong was taken to the 11th Ward of Jinan Prison on December 12.

Mr. Wu Wenzhang was arrested on June 9, 2017, and sentenced to an 11-year prison term. He is incarcerated in Baoding City Prison.

Ms. Li Shuhua, 60, was arrested by officers from Weidu District Domestic Security Division on January 13, 2020, for talking to people about the persecution of Falun Gong. Her home was ransacked.

Ms. Li Xueqin from the Acheng District was taken to Harbin City Second Detention Center on November 9, 2018. When her family went there to deposit money for her on January 17, 2020, they learned that she had been sentenced to a three-and-a-half-year prison term and transferred to Harbin Women’s Prison on January 14, 2020.