(Minghui.org) The Lalbagh Flower Show at the Botanical Gardens in Bengaluru that ran from January 17 to 29, 2020, attracted more than 100,000 visitors. Falun Dafa practitioners introduced people to the beauty of the practice and raised awareness of the persecution of practitioners in China. 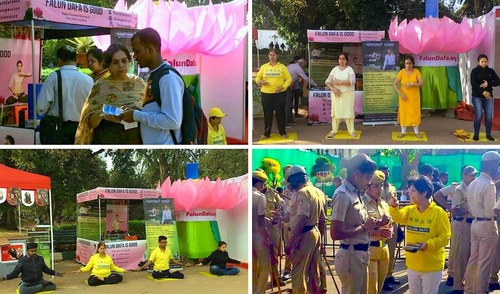 Practitioners introduce the practice and raise awareness of the persecution in China at the Lalbagh Flower Show.

The Falun Dafa booth had a huge pink lotus flower beside it that was taller than the booth itself. In the center of the flower was a model of the book Zhuan Falun with a blue cover and Falun Dafa's official site url was written below it.

People looked at the lotus flower with great interest and came over to learn more about Falun Dafa. Some even bought copies of Falun Gong and Zhuan Falun. The lotus flower was illuminated in the evenings and many people came to see it.

Practitioners took shifts at the show, which ran from 10 a.m. to 7 p.m. all 13 days. Some of them passed out flyers, some demonstrated the exercises, and others explained to people that, while Falun Dafa is warmly welcomed in more than 100 countries and regions, practitioners are still persecuted by the Chinese Communist Party in China. Many tourists inquired about the practice and where they could learn it. Some came to learn about the exercises and asked about the teachings. 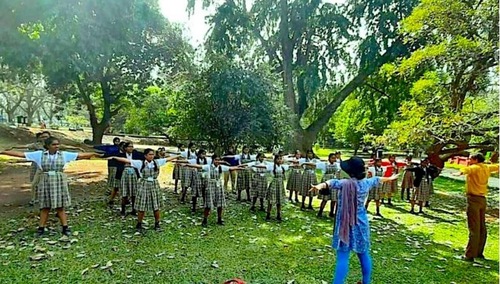 After learning a little about Falun Dafa, a group of students start to learn the exercises.

A group of middle school students came over after hearing the peaceful Falun Dafa practice music and stopped at the huge pink lotus flower beside the booth. Practitioners explained that Falun Dafa is an advanced system from the Buddha school and is based on the principles of Truthfulness-Compassion-Forbearance. After listening to the introduction, the students learned the first and second exercises.

Practitioners also gave flyers to police officers who were waiting to go to work. They talked about the practice and about persecution happening in China. Many officers expressed interest in learning the exercises and wanted to get more information about Falun Dafa.

Introducing Falun Dafa at a University

Practitioners went to an Ayurvedic medical college in Bengaluru on December 26, 2019, to introduce Falun Dafa to the faculty and students. They explained that Falun Dafa is an ancient traditional cultivation method guided by the principles of Truthfulness-Compassion-Forbearance. It was first introduced to the public in China in 1992, and almost 100 million people had started practicing it by 1999. They also explained that former Chinese Communist Party leader Jiang Zemin ordered the persecution of practitioners and that the CCP has even been killing them for their organs. Practitioners taught the first and second exercises to the faculty and students. 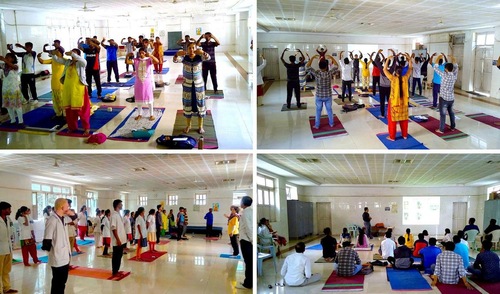 Practitioners went to an Ayurvedic medical college in Bengaluru twice to teach the Falun Dafa exercises and explain Falun Dafa and the persecution practitioners face in China.

Practitioners accepted an invitation from the Ayurvedic medical college in Bengaluru again and returned to the campus on January 20, 2020, to teach Falun Dafa to students who had not yet learned the practice. This time, practitioners taught all five exercises. At the end of the workshop, students asked for practitioners' contact information. Some commented on how great they felt while doing the exercises and wanted to download some Falun Dafa books from the Internet to learn more about it.

“Incarcerated for More Than 8 Years, Anhui Woman Gets Another 4.5 Years for Her Faith”