(Minghui.org) New Zealand is still enjoying the tail end of its summer. In Christchurch, the largest city in the South Island, pleasant, sunny weather greeted the Inner City East Multicultural Festival in Doris Lusk Reserve on Saturday, February 15, 2020. Falun Dafa practitioners had a booth at the event to connect with the community and let more people know about practice and the persecution in China. 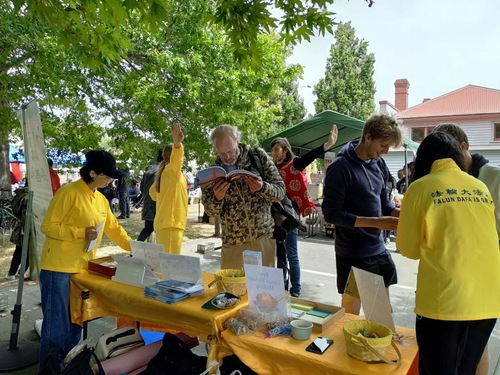 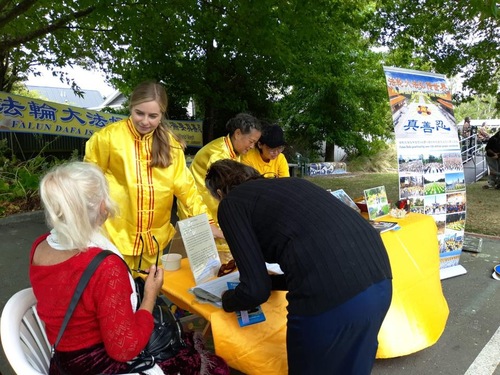 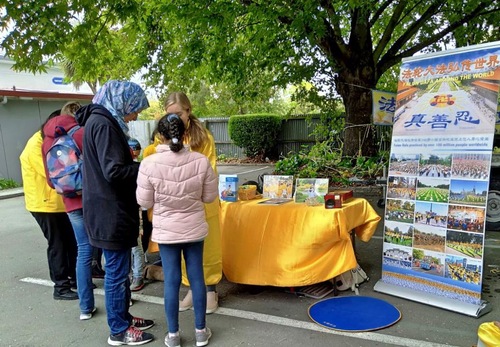 Many Christchurch locals came over to the Falun Dafa booth and browsed through the books, fliers, and brochures. Some learned how to make paper lotus flower bookmarks at the booth, while others learned the Falun Dafa exercises. 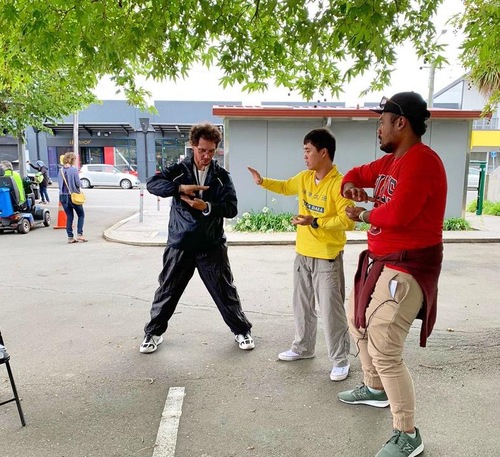 During the event, the host introduced Falun Dafa to the crowd many times through the sound system. Several people came over to invite Falun Gong practitioners to teach the exercises at their organizations. 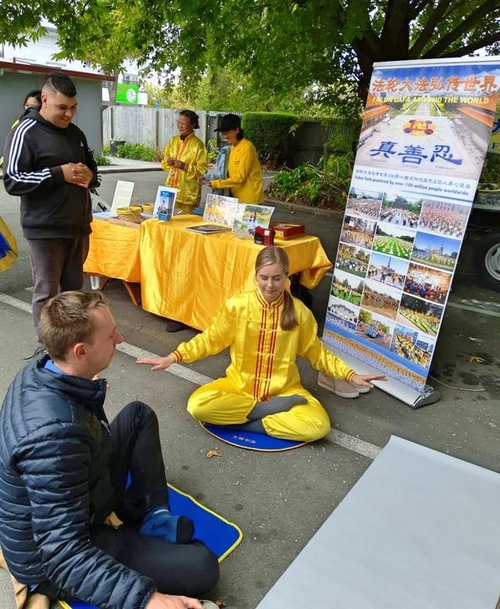 Callum felt like he was floating while in meditation.

Callum connected with the principles of Truthfulness-Compassion-Tolerance and wanted to learn the exercises right there at the event. He sat on a mat and followed along as a practitioner showed him how to cross his legs and how to hold his hands and arms for the meditation. He said excitedly, “I really can feel the energy there [under his palms], I feel like I am floating.”

After learning the meditation, he browsed the FalunDafa.org website for the exercise instruction videos. He said he wanted to go to a practice site to do the exercises with practitioners. He left his contact information.

A man named Conner talked to a practitioner and said that he was looking for a cultivation way to change his inner world. The practitioner explained Falun Dafa to him and shared some of his experiences of benefiting from the practice.

Conner was deeply touched and said he had quit drug and alcohol addictions half a year ago. He learned the exercises and then left his contact information so he could join a local group exercise practice. “Falun Dafa is what I had been searching for,” he said.

Many people signed on a petition calling for an end to the forced organ harvesting in China after reading brochures and talking to practitioners. 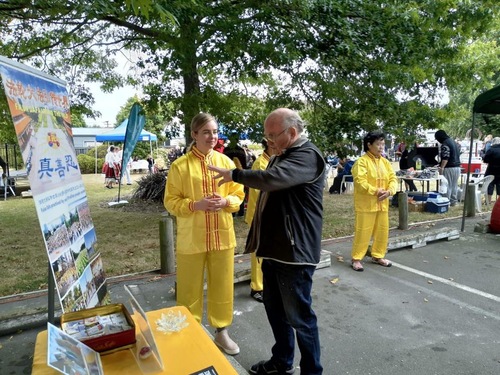 A man who lives nearby talked with a practitioner for a long time about Falun Gong and the persecution in China. He said that research has shown that meditation is beneficial to health and suggested practitioners teach Falun Gong in elementary schools so the younger generation can learn it at an early age.

The Falun Dafa booth also attracted some Chinese people. An older couple chatted with practitioners. They were retirees from Beijing who were stranded in New Zealand because of the coronavirus epidemic in China.

They talked with a practitioner about the numerous political campaigns the Chinese Communist Party (CCP) had launched and how millions of people were killed in them. They also talked about the CCP's ongoing persecution of Falun Gong and its forced organ harvesting crimes.

The couple quit the Chinese Communist Party and its affiliated organizations that they had joined many years earlier. The husband said, “Today, we severed our connection with the Party. I feel very relieved after talking with you. I truly can feel the truthfulness, compassion, and beauty in you!”

“The Coronavirus Cannot Slow Our Pace to Save People”

“How Dangerous Is the Novel Coronavirus?”