(Minghui.org) Falun Gong practitioners in Sweden held truth clarification activities in front of Konserthuset, the Stockholm Concert Hall, on Saturday, February 15, 2020. Many people were drawn over to their exhibition by a large banner that read “Help stop the persecution of Falun Gong.” Practitioners also distributed introductory flyers and collected signatures for a petition calling for an end to the Chinese Communist Party’s (CCP) persecution. 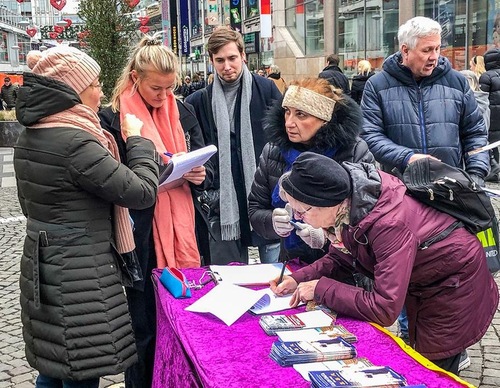 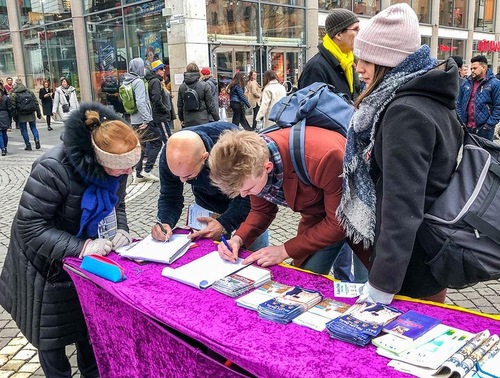 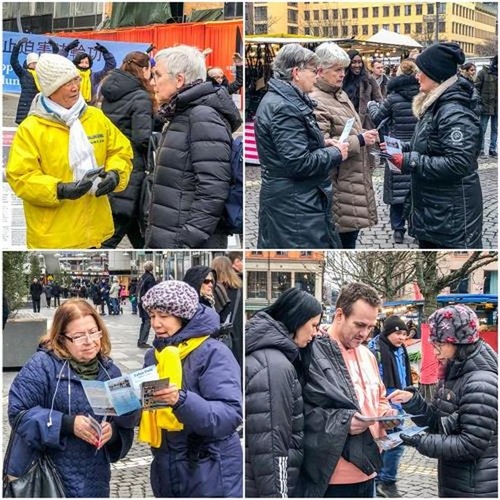 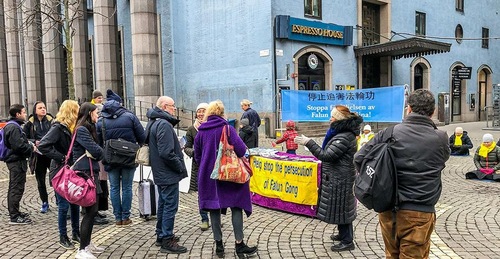 A woman named Belit was almost in tears upon hearing about the CCP's harvesting of organs from living Falun Gong practitioners. “It reminds me of the Holocaust,” she said, “It’s evil and shouldn’t happen again.” She hoped governments around the world would get together to stop the CCP’s crimes against humanity. She signed the petition and said she would like to try the Falun Gong exercises at the group exercise site in downtown Stockholm.

A woman named Ingrid chatted with a practitioner after signing the petition. “I support you,” she said sincerely, “The outbreak of coronavirus has allowed the whole world to see the Communist Party’s shame.” She hoped more people in China and around the world would unite and “say no” to the CCP.

A middle-aged Swedish couple stopped to speak with a practitioner. “We couldn’t believe organ harvesting from living people was true and didn’t understand why they would persecute good people,” the woman said. “We now know that you are following Truthfulness-Compassion-Forbearance, and that the CCP is despicable and ruthless. You are a sharp contrast to them, so they can’t stand it.”

A young man from China came toward the practitioners' activities and stood there quietly reading information about Falun Gong. A practitioner approached him to talk, but he abruptly said he already knew everything and was just taking a look. The practitioner asked him if he had joined the Communist Party or any of its affiliated youth organizations. “I don't believe in this,” he retorted, “I still have to go back to China, don't tell me these things.” The practitioner did not give up and said, “It’s even more important for you since you have to go back to China ...

“In this world there are many people who deceive people for money and material things, but have you heard that there are those who deceive people so that they will not be safe? During this time of great crisis you have the good fortune to learn the truth about Falun Gong while in Sweden. You really need to treasure this.”

The practitioner went on to explain how the CCP always deceives the Chinese people, including now during the coronavirus outbreak, and why it is vitally important to quit the Communist organizations.

The young man eventually told the practitioner that he had joined the Party, the Youth League and Young Pioneers. He decided to renounce all of his Party affiliations.

“The Power of Falun Dafa Saved My Life”