(Minghui.org) According to information collected by Minghui.org, 125 Falun Gong practitioners were arrested and 69 were harassed for their faith in January 2020. Fifty-eight of the arrested practitioners remain in custody at the time of writing.

Falun Gong, also known as Falun Dafa, is a spiritual practice centered on the principles of Truthfulness, Compassion, and Forbearance. Since the Chinese communist regime started persecuting the practice in July 1999, many practitioners have been subjected to arrest, imprisonment, torture, forced labor, and even organ harvesting.

Most of the practitioners were targeted prior to the Chinese New Year and the outbreak of the deadly coronavirus that has prompted the lockdown of more than 80 cities across China.

The provinces of Hebei, Heilongjiang, and Shandong had the most arrests and harassment cases. All other provinces reported single-digit cases, between 5-9 arrests and 1-6 cases of harassment each. 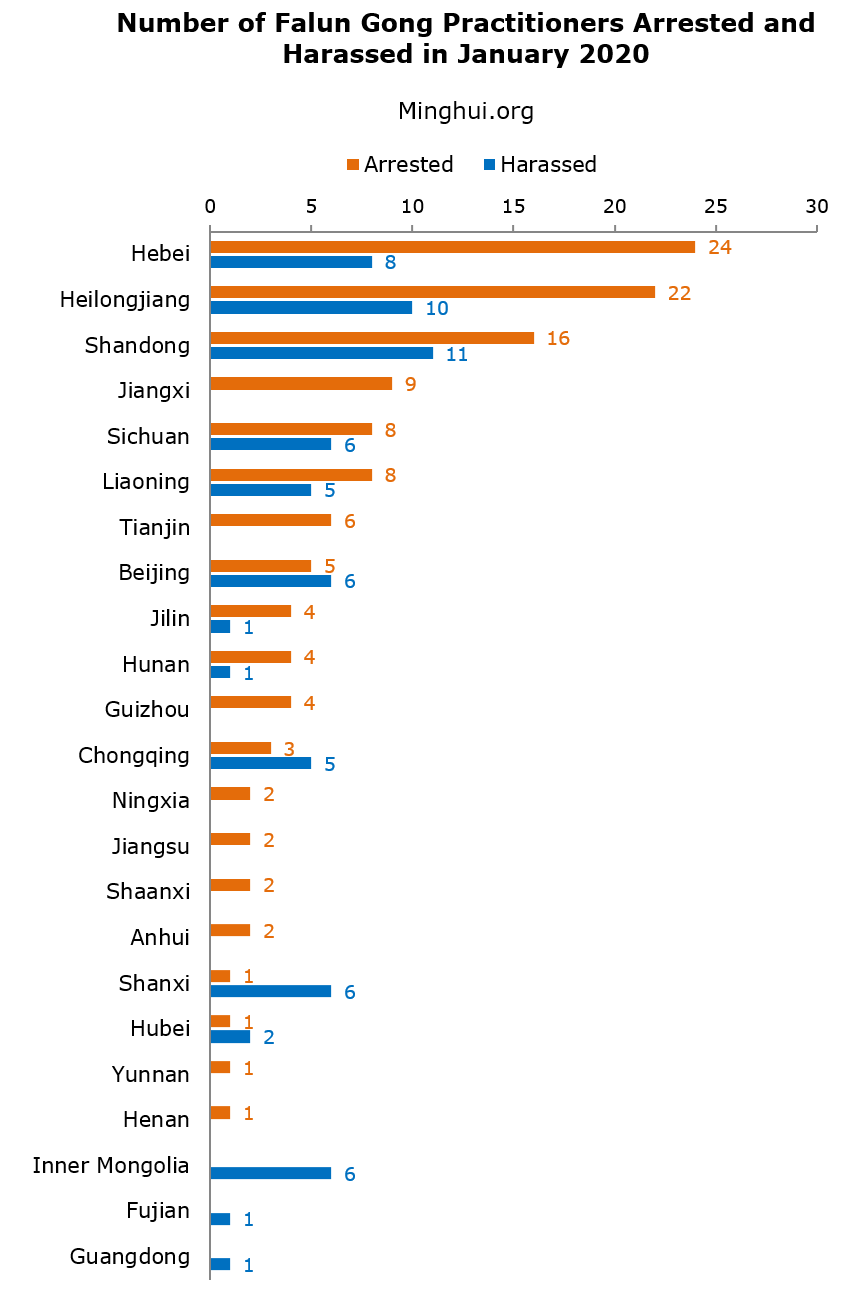 It was reported that the authorities in Hongshan District, Wuhan City, Hubei Province, prepared a list of 40 Falun Gong practitioners in December 2019 and attempted to arrest them after the Chinese New Year and take them to a brainwashing center. As the city was later locked down to contain the coronavirus, it remains to be investigated whether the planned arrests were carried out.

In Heilongjiang Province, Mr. Gong Fengqiang, 48, was taken to a quarantine room for coronavirus patients on January 27, 2020, after he lost consciousness from being abused in a detention center. Mr. Gong’s arrest on December 27, 2019, came only weeks after his wife fell to her death while trying to escape arrest, also for her faith in Falun Gong.

Below is a snapshot of the arrests and incidents of harassment in January 2020. The increased control of information and strict transportation restrictions in China due to the coronavirus outbreak make it even more difficult to report in a timely manner the number of Falun Gong practitioners who are arrested and harassed.

Ten residents in Mudanjiang City, Heilongjiang Province were arrested on January 5 and 6, 2020 for holding firm to their faith in Falun Gong.

Among them, eight practitioners were arrested on January 5, 2020. The police followed them after they left a practitioner’s home after studying Falun Gong teachings together. The police confiscated their keys, took them to Xi’an Police Station, and ransacked their homes.

The police had been monitoring the practitioners before the arrests and obtained information about their study group, where they distributed Falun Gong informational materials, and their home addresses.

Ms. Liu was released after failing a physical examination, and the other seven practitioners were given 15 days of administrative detention at Mudanjiang City Detention Center.

Two more practitioners, including Ms. Fan Limin, in her 40s, and Ms. Yu Changlan, were arrested on January 6, 2020.

The police knocked on the door of Ms. Yu’s home the night before, but she refused to let them in. She was arrested when she left for work the next morning.

It remains unclear where Ms. Fan and Ms. Yu are currently being held.

Sichuan Resident Arrested After Applying to Renew His Household Registration

Mr. Yu Ziming, 64, is a resident of Longchang City, Sichuan Province. He went to the local police station on January 2, 2020 to renew his household registration. The police demanded to take a look at his home. Mr. Yu took them home, only to have the officers ransack his place.

Mr. Yu demanded to see a search warrant. One officer replied, “You Falun Gong [practitioners] are outlawed, and we don’t need any documents to search your home.” It’s not clear how the police found out that Mr. Yu practiced Falun Gong.

The police attempted to arrest Mr. Yu. When he resisted, one officer grabbed his hair and slammed his head against the wall. The right side of his face became so swollen that he could barely open his eye. The swelling and bruises on his forehead were still visible even after two weeks.

The police later brought Mr. Yu and another Falun Gong practitioner who happened to be visiting him to the police station for interrogation. The two practitioners refused to answer any questions. They were released around 5 p.m. that day.

Granddaughter Fired Because of Grandmother's Arrest

Ms. Sun Jianyan, a native of Hegang City, Heilongjiang Province, was arrested on January 15, 2020, in Yichun City, about 91 miles away from Hegang. She had just moved to Yichun a month earlier to avoid being persecuted for practicing Falun Gong. The police still managed to track her down and arrest her.

Many Falun Gong practitioners outside of China called the police agency and urged them to release Ms. Sun. In retaliation, the police forced her granddaughter’s workplace to fire the younger woman.

Ms. Li Ruiling, a resident of Beijing, was arrested on January 27, 2020 while putting up informational materials about Falun Gong. Seven officers ransacked her home and confiscated her Falun Gong books, related materials and computer.

Ms. Li’s uncle dropped by, unaware of what was happening in his niece's home. The police grabbed his bag and dumped its contents on the ground. When the elderly man in his 70s argued with the police, they handcuffed him and held him against the ground.

Both Ms. Li and her uncle were then taken to the local police station. Ms. Li was later transferred to Dongcheng Detention Center, and her uncle was released. The police harassed her family a few more times afterwards. Her family, especially her mother-in-law in her 80s, is very worried about her.

Ms. Qi Jirong, around 80, and Ms. Yu Dezhen, in her 50s, residents of Shizuishan City, Ningxia Province, were arrested on January 23, 2020, after being reported for talking to people about Falun Gong.

The police ransacked Ms. Yu’s home and took away her cellphones. She is currently held at Dawukou Detention Center. Ms. Qi’s situation remains to be investigated.

Ms. Liu Shuhua, 59, a resident of Xuchang City, Henan Province, talked to a man in his 80s about Falun Gong and gave him three booklets on January 8, 2020. The man showed his son the booklets upon arriving home. His son, who had been influenced by the slanderous propaganda against Falun Gong by the communist regime, reported Ms. Liu to the police on January 10.

The police identified Ms. Liu after reviewing videos taken by street surveillance cameras. They searched her home on January 13 and took away her Falun Gong-related materials.

The police held Ms. Liu under criminal detention at Xuchang City Detention Center, claiming that she was a “repeat offender” as she had been sentenced twice in 2010 and 2013 for talking to people about Falun Gong.

Ms. Sun Fenglong, a practitioner in Harbin City, Heilongjiang Province, was arrested on January 27, 2020. The police took her to the hospital, where a doctor forcibly collected her blood sample and performed a thorough physical examination of her. She was held in detention for seven days before being allowed to go home.

Also on January 27, the police arrested another practitioner, Mr. Ma Chengbao. The doctor also took his blood sample and examined him. He was detained at Yaziquan Detention Center for seven days.

Mr. Lang Wanhong was arrested on January 28. He failed the physical examination twice and was extorted out of 500 yuan before being released.

Police officers in Shenze County, Hebei Province, broke into Ms. Wang Qiufen’s home on January 24, 2020, the eve of Chinese New Year. They tore down new year couplets and decoration that bore information about Falun Gong on her front door. Ms. Wang’s family attempted to stop them, but to no avail. The police stayed about 15 minutes and then left.

The police next went to Ms. Wang’s neighbor, Ms. He Xiuling’s home, after seeing similar new year couplets on her door. They also tore down Ms. He’s couplets and asked for her name and phone number before leaving. They threatened to arrest Ms. He and her son if she refused to give the police her phone number.

Lian was met by a team of officers upon arrival. The police demanded that she persuade Ms. Guo to give up practicing Falun Gong. They threatened that her childen’s future would be affected if Ms. Guo did not renounce Falun Gong.

The authorities extorted 100,000 yuan out of Lian and said they would return 10,000 yuan to her each year if Ms. Guo isn’t arrested for talking to people about Falun Gong in that year. But if Ms. Guo is arrested, the 10,000 yuan would be confiscated.

Under the tremendous pressure, Lian's husband is contemplating divorcing her.

Around 9 p.m. on January 22, 2020, Peng Yuncheng and another police officer showed up at Ms. Liu Xiuwen’s door. Ms. Liu, an 83-year-old retired college instructor in Chengdu City, Sichuan Province, let them in.

Ms. Liu asked them, “Why did you come here?” Peng said they just wanted to visit her. She told them that she was doing fine and that it was illegal for them to harass her. The police left after a short while.

“Master Helped Me Overcome My Tribulations”