(Minghui.org) Today's news from China includes incidents of persecution that took place in 7 cities or counties in 5 provinces, where at least 17 practitioners were recently persecuted for their belief. 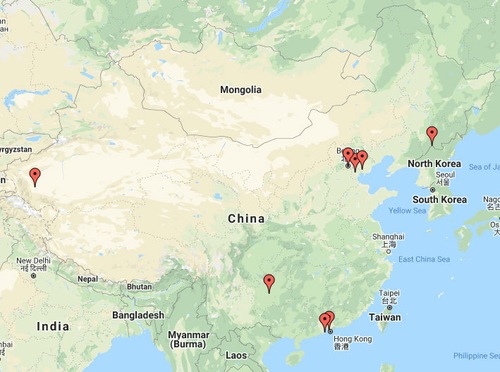 Mr. He Qian was arrested by officers from Jiangyang Police Station on the afternoon of January 20, 2020, for talking to people about Falun Gong at Jinping Square in Pingchang County. He was taken to the Domestic Security Division. The officers ransacked his home and confiscated a computer and over 1,000 yuan paper bills with information about Falun Gong printed on them.

Mr. He is now being held in Bazhong City Detention Center.

Ms. Yang Congmei from Gaozu Village, Xinmin Town, Xindu District, Chengdu City, was arrested by officers from Mengyang Town Police Station at her barbershop in Mengyang, Pengzhou City, on the morning of January 27, 2020. She is being held in Pengzhou Detention Center.

Both practitioners were later released.

Ms. Ma Yu’ai was arrested at home by Ma Chao, deputy director of Haotouzhuang Township Police Station, Dingzhou City, and other officers on the afternoon of January 9, 2020. Her home was ransacked, and photos of the founder of Falun Gong, a color printer, notebook computer, Falun Dafa books, and other printed materials were confiscated.

Ms. Gao Qingxiu and Ms. Sun Runtao from Guyuan County were arrested by officers from Changliang Township Police Station on August 17, 2019, for talking to people about Falun Gong. They were taken to Zhangjiakou City Detention Center.

6. [Huanggang City, Hubei Province] Cases of Five Practitioners Turned Over to the Court

The cases of the four practitioners and Mr. Zhang Xuqing were turned over to Wuchang Court on September 19, 2019.

Ms. Bi Qinghua, a retired employee of the Harbin education system, was arrested in 2018 for distributing Falun Gong materials. She was sentenced to an 18-month prison term and fined 5,000 yuan.

The school's personnel department suspended her pay in November 2019.

“Stories from the Front Lines of the Coronavirus Epidemic, Seizing the Time to Save People”

“Regarding A Fake Jingwen”