(Minghui.org) Today's news from China includes incidents of persecution that took place in 9 cities or counties in 7 provinces, where at least 39 practitioners were recently persecuted for their belief. 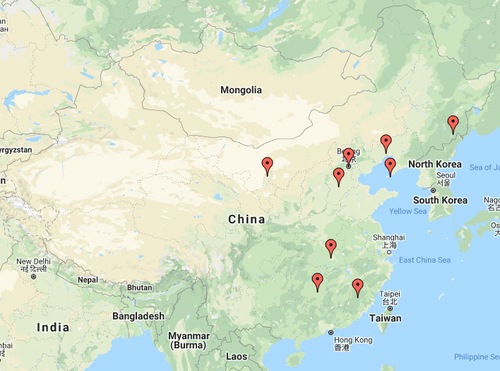 At least 27 practitioners were taken to prison in 2019:

Ms. Wang Liguo, Ms. Sun Baoying, and Ms. Liao Jie were taken to prison on May 21.

Ms. Yang Lihua and Mr. Wang Zhao were taken to prison on August 27.

Mr. Zhou Hongxu was taken to prison on August 29.

Ms. Wang Sumian was taken to prison on November 19.

Ms. Li Jianmei was taken to prison on December 10.

Ms. Li Ruiling from Central Jingsong Street, Chaoyang District, was arrested by officers from the Huashi Street Police Station, Dongcheng District, when she posted information about Falun Gong on January 20. Her home was ransacked and Falun Dafa books, a computer, and printed materials were confiscated. Ms. Li is being held in the Dongcheng Detention Center.

Mr. Geng Wenjing, 70, from Daying Village, Wangkou Town, was arrested by Xie Xiaofei and other officers from the Datun Police Station on August 29, 2019, for distributing Falun Gong materials. He was taken to the Hengshui City Detention Center, and tried in the Anping Court on the afternoon of January 17, 2020.

Ms. Zhang Guizhen from the Meiguiyuan Residential Community, Bayi Garden Community, Wuchang District, was hung up for several days and nights in the Wuhan City No. 1 Detention Center. Her little finger became disfigured as a result of brutal beatings. She was also force-fed, and is now very thin and frail.

Mr. Zhang Qingyuan, 52, is disabled, and has only one hand. He went to Computer Plaza to repair his printer in the second half of 2005, and was followed and arrested. His home was ransacked, and he was taken to a detention center. Twenty days later, he was in critical condition and sent home. The court later issued a notification that Mr. Zhang had been sentenced to a four-year prison term. He became displaced since June 2006. No one has heard from him for 14 years.

Ms. Huang Feng’e from Qingliu County was arrested in April 2019, and taken to a detention center.

Ms. Yu Dezhen, around 50, and Ms. Qi Jirong, around 80, from the Huinong District, were arrested by security guards and police officers on the afternoon of January 23, 2020, for talking to people about Falun Gong. They were taken to the Nanjie Police Station.

The police ransacked their homes, and confiscated photos of the founder of Falun Gong and two cell phones. Ms. Yu is being held in Dawukou Detention Center.

Ms. Wu Fenxiang from Hengyang City was searched and arrested by the railway police at the Guangzhou City Train Station on January 9, 2020, when she returned home after visiting her son in Guangzhou. The police ransacked her son’s home that afternoon, and forced them to pay 1,000 yuan.

Mr. Xu Zhihua from Yi County was arrested at the Jinzhou Train Station by the railway police on January 19, 2020, when he traveled to his son’s home for the Chinese New Year. His home was ransacked.

Mr. Xu was taken to the Jinzhou City Detention Center for ten days.