Stuttgart, Germany: People Call for an End to the CCP and Forced Organ Harvesting

(Minghui.org) Falun Gong practitioners in Stuttgart, Germany, held activities near the center of town on November 21, 2020, exposing the Chinese Communist Party’s (CCP) persecution of Falun Gong (also known as Falun Dafa). They placed an emphasis on the CCP’s harvesting of organs from living Falun Gong practitioners. Those who learned the facts signed petitions calling for an end to the CCP and its crimes against humanity. 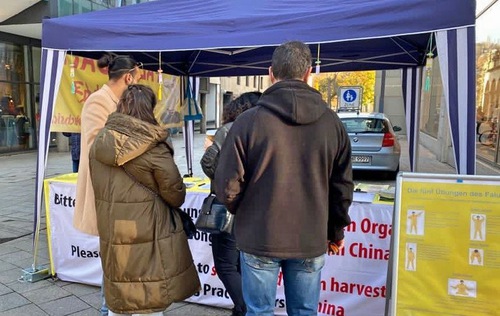 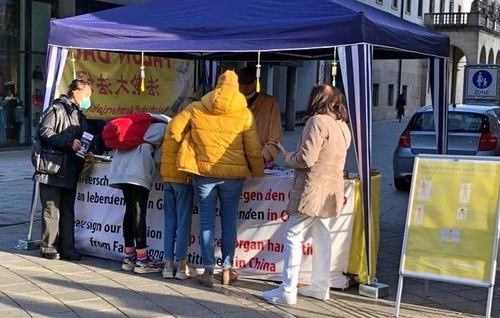 Passersby sign a petition in support of Falun Gong.

A woman approached the information booth and wanted to sign the petitions. A practitioner told her that one of the petitions calls on the CCP to stop organ harvesting and the other was calling for an end to the CCP entirely. She said sincerely, “I wish you great success!”

After signing the petitions, Mr. Von-Hamm, a local resident asked, “What’s the origin of Falun Dafa?” The practitioner told him that Falun Dafa was a cultivation practice that came out of traditional Chinese culture and that it improves one’s health and spirit. The man seemed very interested in learning more about Falun Dafa.

Another man gave practitioners a thumbs-up when he saw their banners. He cried, “I’m from Poland. I know the Communist Party is wicked.”

A man from the southern German state of Bavaria told a practitioner, “I live close to East Germany (which used to be under communist control). Back then we picked up TV signals from there and laughed at the lies in their news. But look at what our media are saying today. What we see and hear from the media are similar to what East Germany used to say.” He said he’d read many articles on the Epoch Times and knew about the CCP’s persecution of Falun Gong. He signed the petitioners without hesitation.

When a young Chinese man passed by, a practitioner told him about the Nine Commentaries on the Communist Party and gave him a copy. The practitioner also talked about the significance of quitting the CCP and its affiliated organizations to avoid sharing the CCP’s fate. The young man agreed to quit the Youth League and the Young Pioneers.