(Minghui.org) Today's news from China includes incidents of persecution that took place in 17 cities or counties in 7 provinces, where at least 24 practitioners were recently persecuted for their belief. 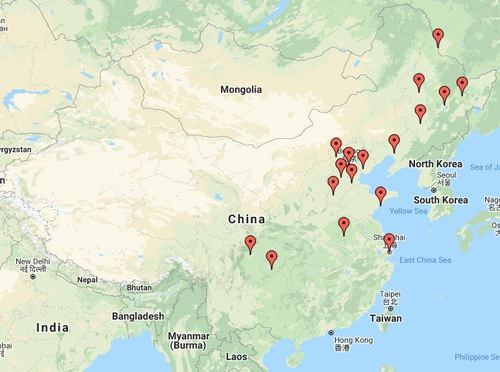 Over 20 plainclothes officers broke into Ms. Han Lihua’s home in the Yangguangjiacheng Community, Ranghulu District, on November 22, 2020. They dragged her out of her home and confiscated all her Falun Dafa books, a computer, two-color inkjet printers, and printed materials. Ms. Han tore up the search warrant and refused to cooperate with any of their demands. She went home that day.

Four officers deceived Ms. Zhao Guifen, in her 70s, to open the door at around 2 p.m. on November 22.

After staying in her home for over half an hour, they took her to the Tieren Police Department in the Sartu District. They said that she’d posted Falun Gong materials and asked her where she got them. Her son signed the transcript. She returned home that day.

Mr. Li Yiheng will have a second hearing at the Daxing County Court on December 10, 2020. [The first hearing on November 10 ended without a verdict being announced.]

Ms. Shi Meijun from Sijing Town in the Songjiang District was reported to the police for talking to people about Falun Gong in a taxi around October 2020. She was arrested by officers from the Minhang District Domestic Security Division. She is still being held in the Minhang Detention Center.

Staff member Liu Ying, who is with the Wenmiao Community in the Nanguan District, called Mr. Liu Feng’s daughter in November 2020 and asked her to come to the community office to sign paperwork. She refused to.

Ms. Luan Cuiliu and her husband Mr. Du Yongtang were arrested on November 9, 2018. Ms. Luan was sentenced to 24 months in prison. She was held in the Harbin Detention Center for 14 months and in Harbin Women’s Prison for 10 months. She refused to renounce her belief and returned home on November 9, 2020.

The officers ransacked their home. The search warrant was issued afterwards. They confiscated Falun Dafa books, computers, cell phones, and cash, including children’s lucky money, earrings, rings, necklaces, antique coins, and so on. The police do not provide the couple or their family with a list of items seized.

Officers ransacked his home and confiscated Falun Dafa books, a computer, a printer, printing supplies, cash, and a car. They took over 30,000 yuan but claimed it was just over 20,000 yuan. After repeated requests from Mr. Yan’s family, the officers returned the money but deducted over 8,000 yuan to cover the costs of their ransacking.

Mr. Yan’s family talked to Zhang and demanded Mr. Yan’s release. Zhang said that his family would have to pay 30,000 yuan, find five “guarantors,” and write a guarantee statement before he could be released.

Ms. Han Lan, 80, is from the Changchun Auto Development Zone. Her pension has been withheld since August 2020. There is no word when she will receive payments again.

In 2016, Ms. Han was sentenced to a year and a half in prison for talking to people about Falun Gong.

Xinxing Community personnel called her in July 2020 and told her to go to the brainwashing center, but she refused to.

Officers from the Huayuan Road Police Station, residential committee personnel, and community property staff in the Nan’an District went to the home of practitioner Liu Ziqun (gender unknown), arrested Liu, and ransacked the place on the morning of November 24, 2020. They confiscated several copies of Falun Dafa books and Minghui Weekly. Liu was released five days later.

Liu was caught on surveillance cameras while distributing Falun Gong materials and was reported to the police.

Officials from the Botou City Political and Legal Affairs Committee and Bozhen Town government called Ms. Chang Yujin’s husband around November 2, 2020. They intimidated him to try to coax him to videotape his wife after talking her into making a statement that she no longer practiced Falun Gong. They called him four times that afternoon.

The pressure to first convince and then videotape his wife frightened him so much that he could not eat and his blood pressure shot up. Ms. Chang refused to compromise her faith and refused to allow him to make a videotape.

Ms. Du Yuhua was arrested by officers from the Dajingmen Police Station on September 25, 2020. She has been held in the Zhangjiakou Detention Center. Her case was turned over to the Qiaoxi District Procuratorate.

Practitioner Dai Fangsheng (gender unknown) was arrested while distributing Falun Gong materials on November 17, 2020. Dai’s mother and two other elderly practitioners were also arrested at the same time. They were released later that day, but Dai was taken to the Chengyang District Detention Center. Dai’s car was impounded.

Officers from the Zhonghanzhuang Town Police Station in Wangdu County broke into Mr. Wang Kexin’s home in Nanwangtuan Village on June 27, 2020. They confiscated his laptop. They pressured him to sign paperwork, but he refused to. They threatened that they would detain him if he did not sign the paperwork the next time.

Deputy Party secretary Wu of Zhonghanzhuang Town government and five or six others went to Mr. Wang’s home in October. They wanted to videotape him making a statement that he no longer practiced Falun Gong. They told him that he could practice at home, but he could not go out and talk to people about Falun Gong. Mr. Wang refused to cooperate.

Another deputy Party secretary, Zhang, in the town government and several others harassed Mr. Wang again on November 24. They told him that he had to say that he no longer practiced Falun Gong, or they would visit him every day until he did. They resorted to all sorts of threats and inducements.

Several town officials went to Mr. Wang’s home again on November 25. They called in village officials and his relatives and family members. They threatened him with his children’s education and career prospects. They warned him that, if he did not agree to sign the paperwork, he would not be able to find a job. They also said that they could locate him wherever he went.

They went to his home again on November 26, but Mr. Wang was out. So they waited for him. They threatened that they would resort to extortion to deal with him.

On the morning of November 27, they went to his home again and pressured him with more threats.

Li Suzhi from the Shenghua Community in the Liaohe Sub-district, Shuangtaizi District, called Ms. Zhou Liying at noon on November 30, 2020. Li told her to sign a guarantee statement renouncing Falun Gong, saying that Li would then remove her name from the government list. She refused to. Li said that the Liaohe Police Station gave the order to have the form signed.

Someone from the Huajian Community in the Liaohe Sub-district, Shuangtaizi District, called Ms. Li Hua’s husband on November 2, 2020. They demanded Ms. Li that come to the office to sign the paperwork. Ms. Li’s husband said that his wife could not go and could not sign due to sickness. He went and signed it instead.

Two officers from the Chaoluowo Township Police Station in Yutian County went to Ms. Wang Sujuan’s home at 11 a.m. on December 6, 2020. They told her to fill out a form, but she refused to.

Five officials from the No. 2 Brigade of Xinguang Village, Xiaohan Town, went to the home of 74-year-old Ms. Huang Xueyu, took pictures of her, and harassed her at around 10 a.m. on November 28, 2020.

Office Li Chuanqiang from the Xinglong Town Police Station, official Lin Mingqing from the Judicial Office, and director Ji Qiangeng of village security went twice to Ms. Luo Meng’s store and harassed her around October 20. They took pictures of her store and prohibited her from telling anyone about Falun Gong. They went to her store again, harassed her, and disrupted her business on November 4.

Party secretary Zuo Zhenxuan of Xinhe Village in Tuoyaozi Town has repeatedly called and harassed Ms. Zhuge Shuzhen and pressured her to sign paperwork since January 1, 2020. Zuo and others went to her homes in the county and the village. They knocked on the door to harass her.

Ms. Zhuge’s son called her on September 5 and said that he was going to be promoted and get a raise but that he first needed his family to find the town Party secretary to get a stamp on a form required by his employer. Without the form, he would be demoted and have his salary cut.

The village Party secretary and the town Party secretary both refused to put the stamp on the form on the grounds that his mother did not sign statements renouncing Falun Gong. His son and other family members were stressed and blamed Ms. Zhuge for her perseverance.

On December 4, 2020, as soon as Ms. Zhuge returned to her home in the village, village secretary Zuo and two others knocked on her door. She refused to open up and did not let them take pictures of her. They soon left.

“Master Is Always by My Side”