(Minghui.org) Falun Dafa practitioners in Hong Kong expressed their gratitude and well wishes to the founder of Falun Dafa, Mr. Li Hongzhi as North America prepared to celebrate Thanksgiving. Falun Gong practitioners who have persisted in clarifying the truth at tourist sites in Hong Kong for many years have found that more and more people now understand the truth. There is even a Hong Kong citizen who, after he understood the truth about Falun Dafa, has persuaded almost 1000 people in China to quit the Chinese Communist Party (CCP) and its affiliated youth organizations. 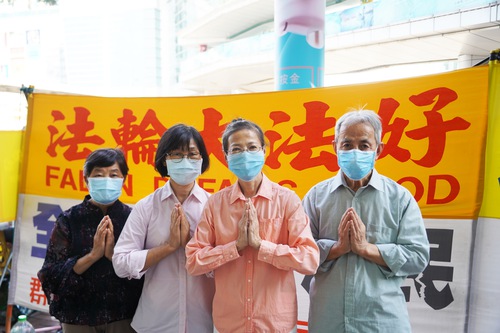 Practitioners who clarify the truth at tourist attractions show their gratitude to the founder Mr. Li Hongzhi for bringing Falun Dafa to the people around the world (Ms. Zheng is on the left, while the third from the left is Xiaowang).

Falun Dafa practitioners’ truth-clarifying site is the first sight that greets people when they get off the train from China to Hong Kong’s Hung Hom station. The site has attractive banners with slogans such as “Falun Dafa is Good,” “The Heavens Annihilating the CCP is an Eventual Happening in History,” and “The Whole World Sues Jiang Zemin,” along with Falun Gong practitioners who quietly distribute truth- clarifying newspapers to people, day by day, year by year. This scene has become a unique part of the Hong Kong landscape.

Since 2012, the Hong Kong Youth Care Association Limited, which is backed by the CCP, has caused disturbances to the truth-clarifying sites in Hong Kong and its operatives continue to hang banners defaming Falun Gong beside practitioners' truth-clarification sites. Falun Gong practitioners have persisted in their efforts in a peaceful and rational manner despite the interference, without stopping for even a day.

Xiaowang, who speaks with a Jiangsu accent, has persisted in clarifying the truth in the Hung Hom area for 17 years. Xiaowang has a refined appearance and distributes the truth-clarification newspapers to passersby with a smile every day. As she thought about Thanksgiving Day, the one who she is most thankful for is still Falun Dafa’s founder, Mr. Li Hongzhi.

“I am really thankful to Master Li Hongzhi for teaching us such a high-level Dafa at this critical period of human history where mankind’s morals and living environment are diminishing to a dangerous level. Before I learned Falun Dafa, my health was really bad and I had many attachments. However, after learning Dafa, I learned the true purpose of life in this materialistic society. I am able to differentiate good and evil, right and wrong. Thus, I am really very grateful to Master Li for his salvation.”

Xiaowang said that because of Falun Dafa practitioners' efforts in Hong Kong over the years, and especially after the anti-extradition movement last year, more and more Hong Kong citizens have come to truly recognize the evil nature of the CCP and have now aligned themselves with the righteous. Many citizens who have understood the truth have voluntarily helped spread the truth about Falun Dafa to others. Take for example a Hong Kong citizen who often read practitioners' newspapers and decided to start sending the newspapers back to his hometown in China. He subsequently helped 1000 people in China quit the CCP and its affiliated youth organizations.

Xiaowang said, “He sent truth-clarifying newspapers to people in his town and village to read. After that, I told him that since they have understood the truth, why don’t you ask them to quit the CCP? Now, whenever he pops by, he will bring more lists with the names of more than 20 or 30 people who want to quit the CCP and its affiliated organizations, and the names on these lists are all their real names. To date, he has already brought more than 40 lists. He has helped complete many matters which will earn him great mighty virtue.”

Falun Gong practitioner Ms. Zheng said cultivating Falun Dafa has brought benefits to her mental and physical health. She is very grateful to Master for his benevolent salvation. She said with gratitude, “Master, please do not be worried. We will definitely persist to clarify the truth to people at the Hong Hum station and let them know that Falun Dafa is good, Truthfulness, Compassion and Forbearance is good.”