(Minghui.org) To mark the occasion of the 70th International Human Rights Day, Australians from all walks of life held a rally at Martin Place in downtown Sydney on the afternoon of December 10, 2020. 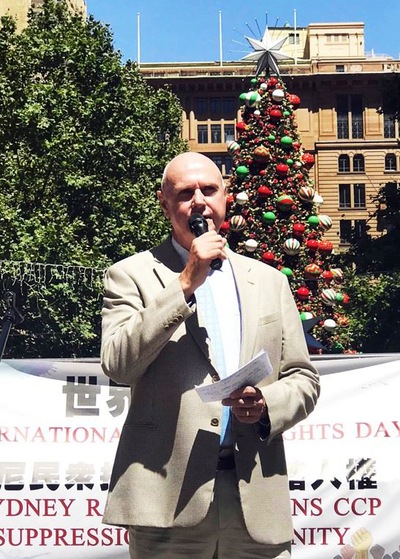 John Deller gave a speech on behalf of the Australian Falun Dafa Association.

In his opening remarks, John Deller, spokesperson for the Australian Falun Dafa Association quoted a statement by US Secretary of State Mike Pompeo in October this year: “the gravest threat to the future of religious freedom is the Chinese Communist Party’s (CCP) war against people of all faiths.”

“Communist ideology has a morbid hatred for religion. The CCP’s purpose in destroying various faith groups is to destroy the spiritual connection between mankind and God. The regime tries to eradicate Falun Dafa because it teaches people that Truthfulness, Compassion, and Forbearance are the most fundamental characteristics of the universe. It has awakened the spiritual consciousness of the Chinese and Western people. For 21 years, Falun Dafa practitioners have helped the world understand the goodness and beauty of Falun Dafa, and the evil nature of the CCP.”

“At present, when Australia’s values and freedom are being threatened by the CCP’s display of its true colors, the Australian government must stand up against its coercion and bullying. Similarly, it is correct to speak up for human rights and end the regime’s persecution of Falun Gong practitioners. This shows that fear of the CCP will lead to tolerance and collusion of crimes committed by the regime – a clear separation from the CCP can prevent perishing with it when it collapses.” 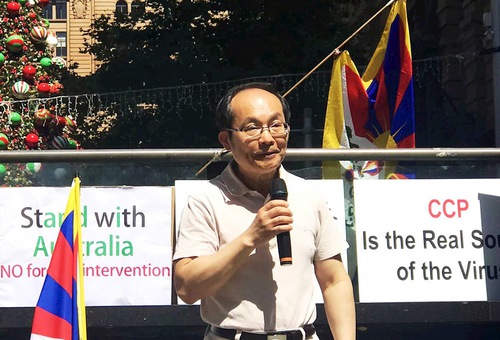 Professor Feng Chongyi, an Associate Professor in China studies in Sydney’s University of Technology spoke at the rally representing the Australian Values Alliance. He said: “The CCP is the most cruel totalitarian tyranny. In the over 70 years of ruling, it has committed countless crimes against humanity in order to maintain its power. Although the international community only understood the nature and ambitions of this evil regime belatedly, a significant change has taken place recently nevertheless. Today I am very happy to see that the international community and Chinese nationals have finally realized that they must unite to fight this regime. I firmly believe that when righteous forces of the international community join to confront the CCP, they will be unstoppable and have the power to eliminate and end its tyranny.”

“The Australian government is progressing steadily in countering the CCP’s infiltration and intervention, especially in recent years, in order to prevent the regime’s infiltration, the Australian government has passed a series of related laws, such as the Foreign Government Intervention Act and the Foreign Agent Registration Act. A few days ago, the highly anticipated Foreign Relations Bill was also formally passed in the Australian Federal Parliament. This legislation authorizes the Federal government to evaluate the contracts signed between the Chinese government and local governments as well as universities in Australia. If the contracts violate Australia's national interests, diplomatic goals or fundamental values, the Federal government has the right to terminate the contracts, such as the One Belt One Road Agreement with the CCP signed by the Victorian government.”

To End the CCP, the Whole World Needs to Wake Up

Tsundu Oser, chairman of the Tibetan Youth Council in Sydney said at the rally: “The CCP has killed millions of Tibetans and destroyed their culture since it seized power in 1949. Its inhuman torture of Tibetans, Uyghurs, the Han people and Falun Gong practitioners is unimaginable! Currently the regime has carried out the same evil doings in international society, which includes the CCP virus. As a result of its cover-up, the disease spread globally causing countless infections, deaths and economic setbacks. World leaders and everyone on this earth need to wake up. Let us work together to destroy the CCP and end it!” 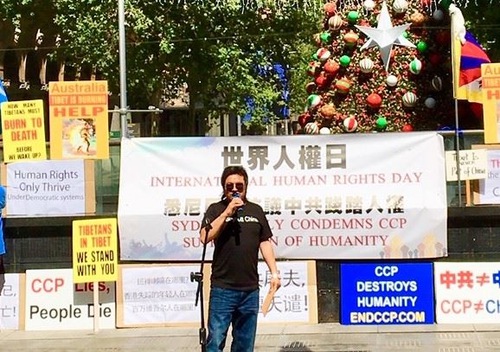 Tsundu Oser, chairman of the Tibetan Youth Council in Sydney. 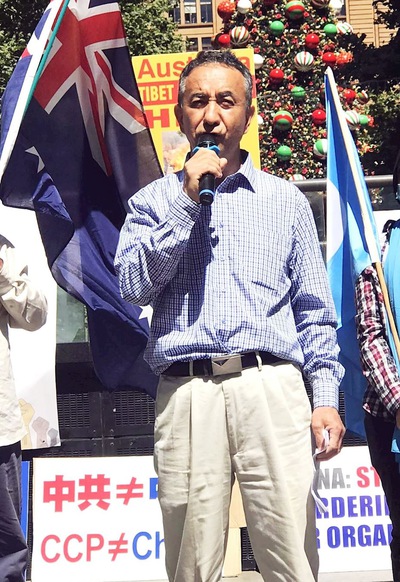 Mr Mehmet Obul, Chairman of the Australian Uyghur Association said: “The CCP has been treating people like animals since it seized power in 1949. It has killed millions of people. Growing up in China, I remembered that we were forbidden from talking about our culture or religion. Many people were detained in concentration camps, especially Falun Gong practitioners and the Ugyhurs. The regime has not only killed many innocent people, its hands are covered in blood, it has also been telling lies.”

“I hope everyone in this world can stand up and help stop the CCP. I hope the Australian government can protect Australia’s democracy and human rights, pass legislation as soon as possible, use the Magnitsky Act to sanction CCP officials violating human rights, and end its rule.” 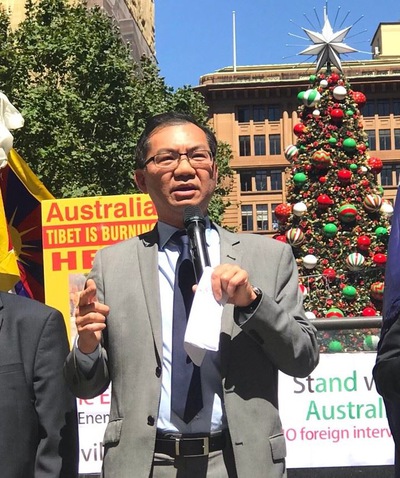 Paul Huy Nguyen, President of the Vietnamese Community in Australia NSW Chapter said: “We the Vietnamese community completely support the Australian government in ending the infiltration of the CCP in this country. We will always stand with those who oppose the CCP because we experienced its tyranny personally. We know that the world has allowed the CCP to kill Falun Gong practitioners for their organs and kept silent for a long time. We must see through the lies of the regime and protect Australia's democracy and freedom.” 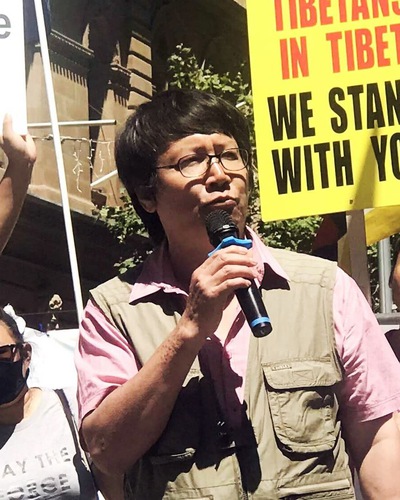 Mr. Pan Qing representing the Sydney branch of the Federation for a Democratic China shouted “take down the CCP.”

Mr. Pan Qing representing the Sydney branch of the Federation for a Democratic China gave a speech. He said: “The CCP’s totalitarian tyranny is the most severe persecution of human rights. When we seek individual rights, we must be aware that only by destroying the CCP’s autocratic rule can we realize our goals of human rights.” To end his speech, he shouted “Take down the CCP” repeatedly.

Righteous People with Conscience Must Do Everything to Disintegrate the CCP 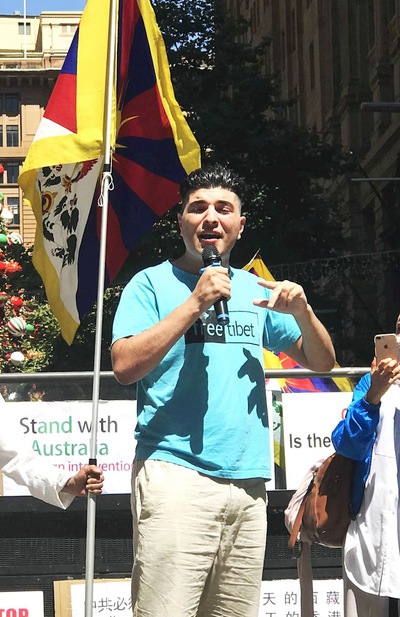 Drew Pavlou renowned Australian activist, best known for suing CCP officials came from Queensland to attend the rally. He said: “The CCP is the most evil, abominable organization in the world. They carried out large-scale genocide policies against large numbers of Uyghurs, Tibetans, Hong Kong citizens and Falun Gong practitioners, removing their organs and selling them for a profit. Righteous people with a conscience must do everything to disintegrate the CCP. If this regime is not brought down, the whole world will turn into Hong Kong, Xinjiang and Tibet.”

“CCP officials hid illegally gained money from China in Australia. They think this is safe. Therefore the Australian government should pass the Magnitsky Act to freeze the overseas assets of these officials and stop them from entering Australia. This is the punishment they deserve for trampling human rights.”

Australians Call for an End to the CCP’s Tyranny 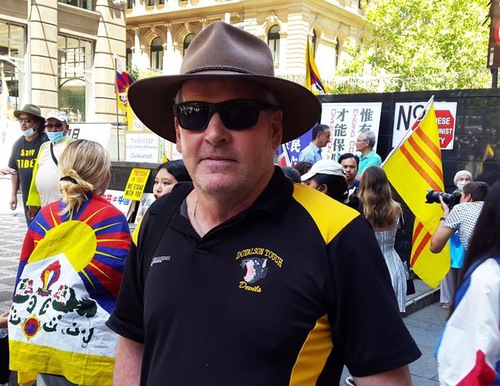 Raimond Kelly, a sixth-generation Australian cracked a whip outside the Chinese consulate office in Sydney early this year after learning that the regime’s cover-up of the Wuhan CCP virus had caused the outbreak to spread globally.

In his address at the rally, he said: “I support those who fight for human rights and freedom of belief. I especially agree with the statement made by the spokesperson for Falun Dafa. These practitioners have helped people understand the kind and peaceful nature of the practice as well as the evil nature of the CCP. As the regime reveals its true colors and threatens Australia's values and freedom, we should persist in justice and conscience, cherish our traditional values and not accept bribes by the CCP. We should part ways with it, and most importantly censure and end its tyranny.”

Mr. Xu, a spectator who is from Jiangsu Province, China said: “The lies propagated by the CCP has misled many people in China in their view of Falun Gong. The regime’s actions have completely gone against humanity. Breaking through internet censorship, I saw videos that exposed the CCP’s lies on the Tiananmen Square student massacre and Falun Gong. I feel that Falun Gong practitioners have made a huge contribution in resisting the CCP’s tyranny globally. I support the spiritual discipline.”

After the rally, protesters marched for over an hour holding banners with messages including “The CCP is the enemy of human civilization”, “Support the Australian government in opposing foreign interference.” They set off from Martin Place and passed the Chinese consulate office in Sydney.

“Everything Master Says Is True”