(Minghui.org) As December 10, 2020, International Human Rights Day approached, German Falun Dafa practitioners held events in Munich to expose the Chinese Communist Party's (CCP) human rights atrocities. They spotlighted the CCP's organ harvesting from living Faun Dafa practitioners in China, highlighted practitioners’ effort over the past 21 years to end the persecution, and at the same time, they focused on how the CCP is poisoning the minds of people worldwide.

“The Persecution of Truthfulness, Compassion and Tolerance Is Unimaginable” 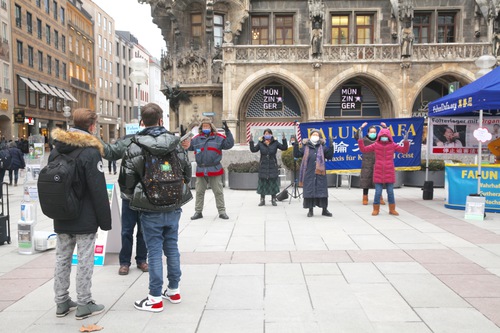 Practitioners held an event at Marienplatz, in the Munich city center, on December 7. 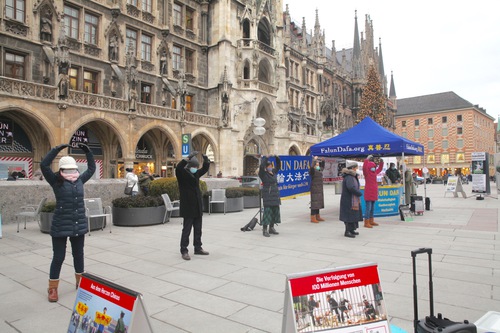 Practitioners demonstrate the exercises at Marienplatz. 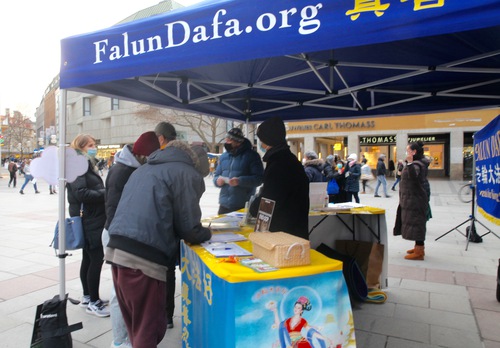 People sign the petition to support the Falun Dafa practitioners’ efforts to end the persecution.

At Marienplatz, the city center of Munich, Mr. Melvin Platzer and his friend talked with practitioners for a long time. They asked about Falun Dafa, why the CCP is persecuting Falun Dafa, and how to help practitioners in their efforts to end the persecution.

A practitioner responded, “Because Falun Dafa teaches people to cultivate Truthfulness, Compassion and Tolerance, which is totally different from the CCP's machination of evil and violence, the CCP is terrified that people who believe in Truthfulness, Compassion and Tolerance will expose its evil nature. Therefore, when the number of cultivators reached a hundred million, the main culprit in the persecution of Falun Dafa, former head of the CCP Jiang Zemin made use of his power to launch the persecution in full force.”

Mr. Platzer signed the petition demanding that the CCP stops its crimes. His friend felt that as the CCP's powers are so strong, signing a petition might not be of any use. Mr. Platzer said, “It's not like that; there are many things in the world now which are really bad. We may not be able to change all these things, but we can start doing it with small bits here and there, such as signing a petition. We can clean up the problems bit by bit.”

A Falun Gong practitioner gave him a small lotus flower with the words “Falun Dafa is good, Truthfulness, Compassion and Tolerance.” Mr. Platzer was very happy to receive it. The practitioner explained the inner meaning of the lotus flower, which emerges from the mud but is not dirtied by the mud. Just as the modern world is like a swamp, only when people keep elevating and cleansing themselves will they be able to bloom like the beautiful lotus flower. Mr. Platzer agreed, and extended the analogy to all flowers that grow upward out of the soil.

At the end of the event, Ms. Kajia Richter stopped by the information table to sign in support of stopping the CCP's organ harvesting of living Falun Gong practitioners. She said, “There is nothing worse than forced organ harvesting. This is a violation of human rights.” She also signed the petition to call for the disintegration of the CCP, saying, “I have seen and heard too much. When people are being captured and imprisoned [by the CCP], the things that can happen are hard to fathom.”

Peaceful Protest at the Chinese Consulate in Munich 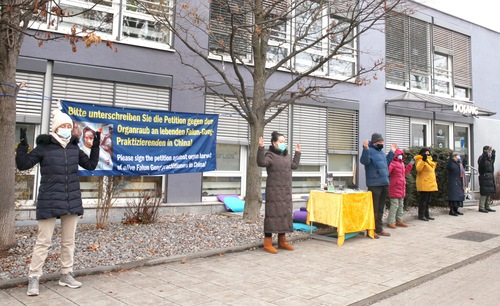 On International Human Rights Day – December 10, Falun Dafa practitioners held a peaceful protest against the persecution outside the Chinese Consulate in Munich. 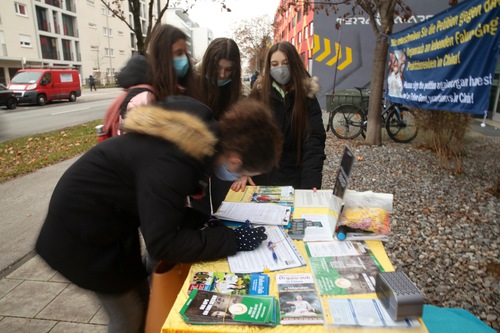 People sign the petition to support the practitioners’ efforts to end the persecution.

Practitioners held an event outside the Chinese Consulate in Munich to protest the atrocities committed by the CCP. Residents who live nearby are not new to this type of activity, as Falun Dafa practitioners used to hold peaceful protests there every week.

“I Have Always Wanted to Oppose the CCP” 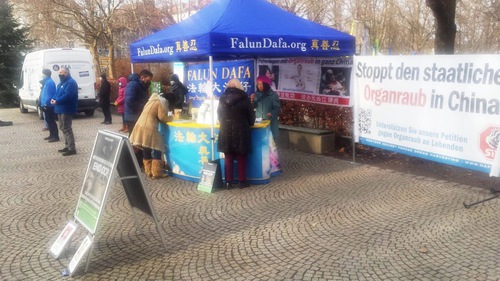 On December 11, practitioners held a truth-clarifying event at the Münchner Freiheit.

The name of the place originated in 1945 when the anti-Nazi group Freiheitsaktion Bayern's Operation Freedom gained control of Munich's two radio towers and broadcast a whole series of news. After the war, in order to commemorate this operation, the city square was named Münchner Freiheit (Freedom of Munich).

“My heart is forever full of hope, as I am someone who has a belief,” an 83-year-old woman said to the practitioners. Then she signed the petition to show her support for ending the persecution.

A young man talked about the dangers of the ideologies promoted by the CCP. “Germany is going through a cultural revolution now, as the media are brainwashing people,” he said. “I am here to sign the petition. This is just what I need, as I have always wanted to oppose the CCP.”

A middle-aged woman told a practitioner that many of her friends have similar feelings about standing up for justice. “It's a pity that they are all not here today,” she said. The practitioner gave her some informational materials and told her that she could ask her friends to sign the petition online, so they too can call for the disintegration of the CCP.