Pompeo: Americans Must Know How the Chinese Communist Party Is Poisoning the U.S.

(Minghui.org) U.S. Secretary of State Mike Pompeo delivered a speech at Georgia Institute of Technology on December 9, 2020. He discussed the Chinese Communist Party (CCP)’s infiltration of U.S. university campuses, and talked about how the CCP steals intellectual property and harasses Chinese students and scholars. He called on U.S. universities to take action to fend off the national security threats brought about by the CCP. 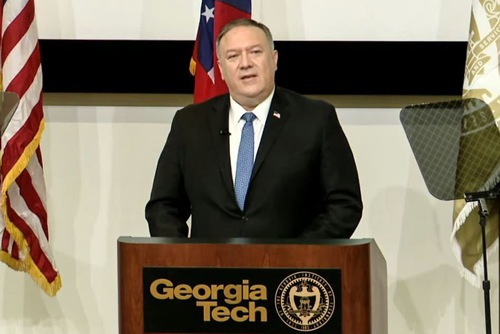 Pompeo said that the CCP is infiltrating the U.S.’ research institutions and we need to take strict measures to prevent such infiltration. He said, “We’ve lived in a bit of a fantasy world for the last 40 years. It is time for the – it is time for the balance to be struck to both maintain our competitive advantage and protect the American advantage from the threats that the Chinese Communist Party ... intend(s) to impose upon us.”

Harassment of Chinese Students and Scholars

Pompeo mentioned the experience of Georgia Institute of Technology professor Fei-Ling Wang, who was held in a secret location for two weeks when he visited China a few years ago. CCP special agents interrogated Professor Wang and threatened him to provide information about his research.

Another example concerned a University of Georgia student, who revealed in 2018 that he was targeted by the CCP secret police. He said, “They have harassed me repeatedly and asked me to give them information about the activities of overseas democracy activists and dissidents, [and] they are particularly interested in the activities of Uyghurs and Tibetans.”

A third example Pompeo gave was about students in Princeton, who were forced to use code names on their homework for a Chinese politics class, so as to prevent the CCP from discovering their identities and prosecuting them for expressing their views on Hong Kong and the CCP under its draconian new national security law. “That’s right here. This happened right here in the United States of America. American students.”

Chinese Students Are the Biggest Victims on Campuses

Pompeo also said that the biggest victims of the CCP’s infiltration are Chinese students who study in U.S. universities. For some students, they face threats from the CCP for speaking their minds, but there are also students who were sent to the U.S. to steal its technology or collect intelligence.

“Students from China at American universities also live in fear that their families back home will be arrested, will be interrogated, tortured – or worse – because of things they say in an American classroom.” But the CCP doesn’t only go after Chinese nationals. “They want to influence American students as well, professors and administrators too.” “This is a tragedy. We have a responsibility to police this.”

He emphasized that when he was talking about “China,” he was referring to the “Chinese Communist Party.” He loves and values the Chinese community living in the U.S. and those in China and he wants good things for them. But “the Party’s propaganda apparatus cannot tolerate pesky Americans or Chinese nationals exposing its bankrupt system, or the fact that the Chinese people can actually flourish when they are in free societies.”

He said that it’s important to talk with the American people about such things, “because Americans must know how the Chinese Communist Party is poisoning the well of our higher education institutions for its own ends, and how those actions degrade our freedoms and American national security. If we don’t educate ourselves, if we’re not honest about what’s taking place, we’ll get schooled by Beijing.”

“They planted Confucius Institutes on our campuses. And under President Trump, our State Department has made very clear these Confucius Institutes are literally up to no good. Many have gone away. Many campuses have seen that and they’ve chosen to close down these institutes.”

“There are groups on campuses called Chinese Students and Scholars Associations here too. They’re directed and almost always funded by the Chinese Embassy or a local Chinese consulate. Its purpose: to keep tabs on students and to press pro-Beijing causes.”

“The U.S. Department of Education over the last years has found that schools have taken an estimated $1.3 billion from China since 2013. That’s just what we know about. Like so many – like Columbia – so many schools that have failed to report the true amounts.”

“What more – what more bad decisions will schools make because they are hooked on Chinese Communist Party cash?”

“We cannot allow this tyrannical regime to steal our stuff, to build their military might and brainwash our people, or buy off our institutions to help them cover up these activities.”

“It’s taken this country and indeed, the entire free world, a long time to understand the trajectory that China is on today. For a long time, Republicans, Democrats, leaders all across academia, institutions, commercial space thought that by trading and engaging with China that the Chinese Communist Party would reform itself, it would loosen up, it would embrace economic and political freedom, and it would present less risk to freedom around the world. But instead, the Chinese communists used the wealth that was created by this to tighten their grip on power, their grip on power over the Chinese people, and to build a high-tech repressive state like the world has never seen.” Pompeo said.

Pompeo also remarked that the CCP uses students to steal American technology. And they will do whatever it takes to get it while pressuring its critics to remain silent.

He pointed out that while the CCP is unable to make breakthroughs on its own innovations, with “state-owned enterprises,” “an authoritarian regime,” and “a government-centric focus,” they are nevertheless sending “400,000 students a year to the United States of America to study.” After these students are trained, the CCP will induce them to go back to China to serve “the Socialist Motherland.”

As a result, “Much of the high-end industrial base inside of China is based on stolen technology, or technology purchased from other nations. It’s not home-grown.”

He gave two examples of such cases. One of them was about Wang Xin, a researcher at the University of California at San Francisco, who allegedly lied about being a People’s Liberation Army officer, all the while collecting information on UC-SF labs. The other example was Ji Chaoqun, who studied electrical engineering at the Illinois Institute of Technology in Chicago. He tried to enlist in the United States Army while omitting his ties to Chinese intelligence, which tasked him with recruiting engineers and scientists where he was working.

“Chinese Communist Party scientists aren’t pioneering cancer cures. We are. And it’s not North Korean biochemists that are producing safe COVID vaccines. We are. And Iranians aren’t ahead in supercomputing. No. In fact, we are. It is the free world and free peoples that produce these superior results. And we should be very proud of that fact. But we have an obligation to protect it, to preserve it, to make sure that that’s the case 10 and 50 and 100 years from now.”

Stand Up Against the Chinese Communist Party

Pompeo emphasized that the U.S. can’t allow the CCP to crush academic freedom on American campuses and he is pleading for help from students, faculties, administrations and trustees.

“We need administrators to close Confucius Institutes and investigate what so-called student groups backed by the CCP money are actually up to on their campuses. We need researchers to be vigilant against fraud and theft, and the academic community to reject the CCP’s financial siren songs. And we need students to truly stand for free speech – the free speech for themselves, those who grew up here in America, and especially the free speech of Chinese students who are on our campuses, who are here to study and learn and to improve their rights, their lives, and to enjoy the fruits of the freedom that we provide them here in the United States of America.”

“Let’s carry forward a banner of freedom to defend our schools, what these institutions were built upon. It will aid our national security. And from the central threat of our time, the Chinese Communist Party.” he said at the end of his speech.

“Sidney Powell: Fake Ballots from China Continue to Arrive in the U.S.”