U.S. Ambassador-at-Large: The U.S. Leading the World in Going at China About Religious Freedom Violations

(Minghui.org) At a teleconference about U.S. actions against religious freedom violators on December 8, 2020, Samuel Brownback, the U.S. Ambassador-at-Large for International Religious Freedom, condemned the Chinese Communist Party (CCP) for its human rights violations. He called on other countries to join the U.S. in putting pressure on the CCP and stopping its human rights abuses. 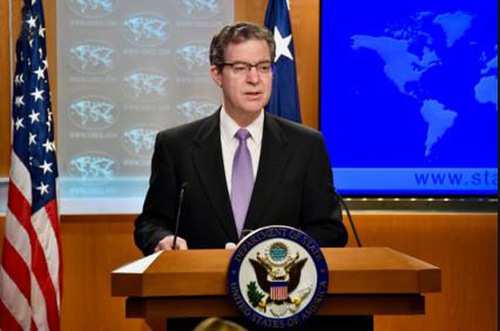 Ambassador Brownback said that international religious freedom is a key foreign policy priority for the U.S. The Department of State has been working hard to promote global respect for religious freedom and combat violations and abuses of this fundamental human right.

He mentioned that just six days ago, Mike Pompeo, the U.S. Secretary of State, has designated China, Burma, Eritrea, Iran, Nigeria, North Korea, Pakistan, Saudi Arabia, Tajikistan, and Turkmenistan as Countries of Particular Concern (CPC) for their intolerance or violation of religious freedom.

He praised Sudan and Uzbekistan for the reforms they had implemented to open up the religious freedom in their nations, for which both of them were removed from the list of Countries of Particular Concern.

When asked about the specific approaches they are going to take against China, Ambassador Brownback remarked that “a broad range of sanctions” would be applied when possible and most of the sanctions would be dual-hatted.

“Once a CPC designation is put on, the Secretary at a future time could put further sanctions on once that designation is made, and those have a full – there’s a full range of sanctions that can be done under the presidential authority, where the authority for this would come.” he said.

He said before the CCP denied his visa to China in retaliation against his criticism of communist China, he gave a speech in Hong Kong. He said that the CCP is at war with “the full range of religious people,” including Buddhists, Muslims, Christians, and Falun Gong, but it’s a war they will not win.

He added that the U.S. has led the world in going at China about religious freedom violations and that “a series of sanctions to be placed on China, whether it’s visas or products coming into the United States or exports from the United States being banned.” He also called on other countries to join the U.S. in sanctioning the CCP.

He quoted Lobsang Sangay, the president of the Central Tibetan Authority, who said that either the world community will change China or China will change the world. China needs to act like a normal nation and follow the rules, including religious freedom.

Ambassador Brownback emphasized that religious freedom is a specific human right recognized by the UN and in the Chinese constitution. “The world community has got to put abundant pressure on China to change, or China will change the world.”

He also mentioned the situation in Xinjiang, where it’s “terrible on the ground” and a million people are been held in detention centers. “You continue to have a virtual police state for everybody else, with cameras and artificial intelligence and social credit score type systems that, if you are a religious adherent, you’re going to be either punished on – at a detention facility or not able to work in the economy or get an apartment or go to school.”

When Chen Quanguo was the party chairman in Tibet, he created a massive persecution system to target the Tibetan Buddhists, and now, as the Party chief in Xinjiang, he is doing the same thing to target Xinjiang residents.

Ambassador Brownback concluded, “What it’s going to take to stop them, I think, is the global community is going to need to step up and join the United States in pressuring China to be a civilized nation. You’re seeing more and more countries stepping up and saying we know China is a wealthy nation with lots of resources that it bullies people with, but it’s got to stop.”

“Retired Doctor Dies After Years of Imprisonment, Extortion and Harassment”

“Two Guangdong Women Tried for Spreading Information about Their Faith”