People who had been hurrying past stopped in their tracks to watch practitioners demonstrating the five sets of exercises. Many people also stopped to talk to Falun Gong practitioners or read the poster displays. Practitioners explained Falun Gong and the persecution in China to people who wanted more information. Many residents also accepted materials about Falun Gong and the persecution in China, and people signed a petition to stop the CCP's live organ harvesting from Falun Gong practitioners. Throughout the two days of activities, lines formed a number of times, as people waited their turn to sign the petition. 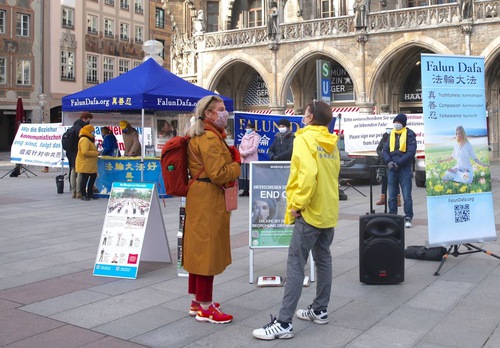 Practitioners hold an event at Marienplatz in Munich on November 21, 2020. 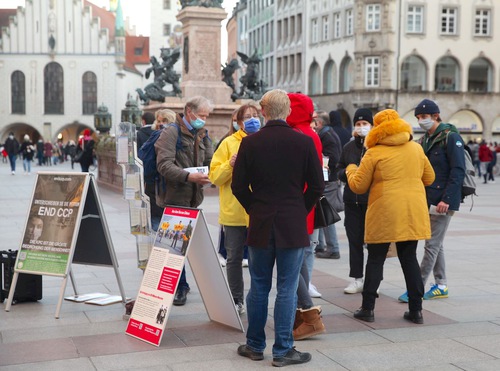 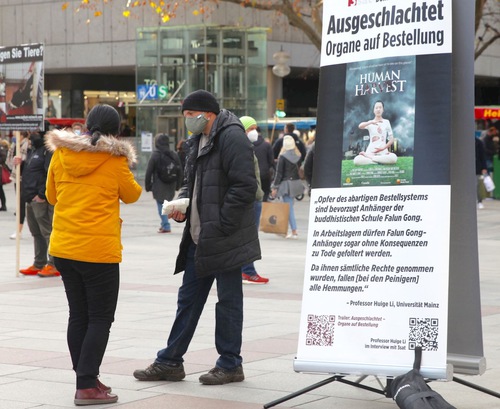 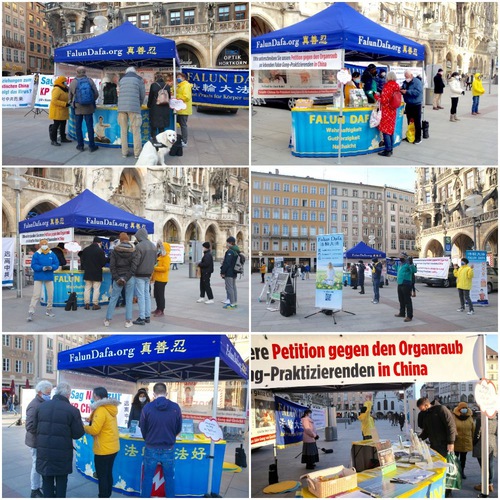 Munich residents sign a petition during the Information Day Event to support the efforts to stop the CCP's persecution of Falun Gong.

Psychoanalyst: Not Enough Has Been Done to Stop the CCP’s Crimes 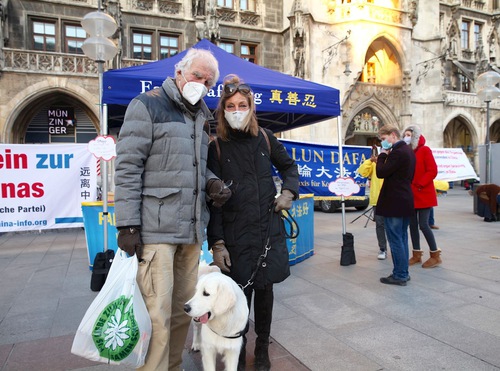 Famous psychoanalyst Ms. Angela Mauss-Hanke and her husband Dr. Mauss, a law specialist, signed the petition to show their support for efforts to end the persecution of Falun Gong in China.

Falun Gong practitioners held an event at Marienplatz in the city center of Munich on November 21, 2020. Ms. Angela Mauss-Hanke, a famous psychoanalyst in Germany, happened to encounter the event. She has clinics in both her hometown and in Munich, and was the long term Europe editor-in-chief for the The International Journal of Psychoanalysis magazine. Ms. Mauss-Hanke and her husband Dr. Mauss, who is a law specialist, signed the practitioners' petition to stop the CCP’s state-sanctioned forced live organ harvesting from Falun Gong practitioners in China.

“With regards to what is happening in China and the criminal acts that the Chinese Communist Party (CCP) has been committing, I feel that the rejection from Europe has been too little,” Ms. Mauss-Hanke said. She hoped that the signatures collected in Germany would help the efforts to end the atrocities.

Ms. Mauss-Hanke said that she had just watched a video about China’s prime minister the day before and he talked about class curriculum in China and how to educate children. “Everything done is for the sake of attaining the obedience and training of the people; you must abide by the rules that the government sets, etc. That place does not favor such principles [Truthfulness-Compassion-Forbearance],” she said.

Ms. Mauss-Hanke said she often hears news about the CCP persecuting Falun Gong and ethnic minorities. “The current development of the situation in Hong Kong is very scary. Some of my friends think so, too. Finally, some of the pro-democracy legislators resigned too,” she said. “We are very worried about Taiwan becoming the next [Hong Kong]. Therefore, we must sign our signatures now to oppose [the CCP].” Dr. Mauss said that he totally agreed with what his wife said.

We Must Let the Whole World Know! 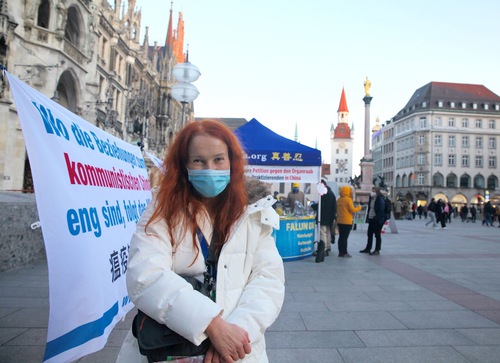 Ms. Alicia Ivaniak thinks that the CCP is a demon

After signing the petitions, Ms. Alicia Ivaniak said, “Treating humans as slaves is the worst. When I saw those photos just now, they made me cry. They electrocuted the women with electric batons—that is too inhumane,” she said. “The whole world must know about this, about what is happening in China.”

Ms. Ivaniak was shocked by the CCP’s persecution of Falun Gong practitioners, who cultivate Truthfulness-Compassion-Forbearance. “That means that they not only deprive people of their freedom, they are also stealing their souls. They are just like demons.”

“Demons do what? They want to steal our free will and the Chinese regime is also doing that,” Ms. Ivaniak said. 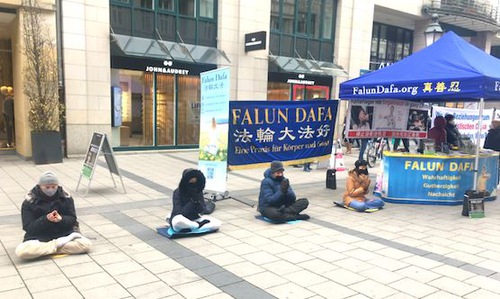 The Information Day event on Sendlinger Straßer street in Munich on November 28, 2020.

Falun Gong practitioners held an Information Day event on Sendlinger Straßer street in Munich's city center on November 28, 2020. A German man was out with his daughter and stopped to talk with Falun Gong practitioner Ms. Zhao for a long time. When the man and his daughter learned that the CCP is treating cultivators of Truthfulness-Compassion-Forbearance so inhumanely, they were both very alarmed, and the man gained a deeper understanding of the evil nature of the CCP.

Ms. Zhao talked to the man about the book How the Specter of Communism is Ruling Our World and the man said that he has read similar books before. The weather was very cold that day and the father and daughter were not wearing many layers of clothing, so they kept shivering as they talked in the cold. By the time they signed the petition, their hands were freezing and they could hardly move their arms. Ms. Zhao was very touched by the scene and said, “It is not easy for a person to do a good deed.” The father and daughter agreed.

“Miracles Brought About by Falun Dafa”