(Minghui.org) Falun Dafa practitioners in Toronto held an event in front of the constituency office of Canadian Immigration Minister, Marco Mendicino at 1:00 p.m. on November 25, 2020. They called on the Canadian government to use the Magnitsky Act to sanction Chinese officials who have persecuted Falun Dafa practitioners in China. More than 20,000 Canadians have already signed the petition to voice their support for the sanctions. 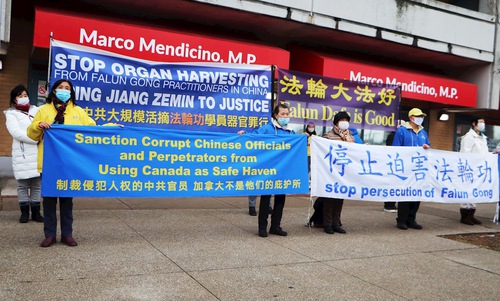 Petition to the House of Commons in Parliament Assembled

WHEREAS:The Justice for Victims of Corrupt Foreign Officials Act (the Magnitsky Law), sanctions foreign officials responsible for gross human rights violations or actsof corruption; The Crimes Against Humanity and War Crimes Act, criminalizes genocide, crimes against humanity, and a variety of war crimes even for acts committed abroad; For over 21 years, China’s communist party officials have orchestrated the torture and killing of large numbers of people who practice Falun Gong, a spiritual discipline promoting the principles of “Truth, Compassion and Tolerance,” including the killing of practitioners on a mass scale for their vital organs to fuel the communist regime’s organ transplant trade;

We, the undersigned, citizens and residents of Canada, call upon the Government of Canada to deploy all legal sanctions, including the freezing of assets, and barring of entry to Canada, against, but not limited to these perpetrators: Jiang Zemin, Luo Gan, Liu Jing, Zhou Yongkang, Bo Xilai, Li lanqing, Wu Guanzheng, Li Dongsheng, Qiang Wei, Huang Jiefu, Zheng Shusen, Wang Lijun, Zhang Chaoying, and Jia Chunwang. We, also call upon the Government of Canada to refuse immigration/visitor visa to those who persecuted Falun Gong practitioners in China.

“We Want All MPs in Canada To Hear Our Voices”

Pixing Zhang: We hope all MPs in Canada hear this petition.

Coordinator of the petition effort, Mr. Pixing Zhang, said, “We received 20,000 signatures in one month. We hope all the MPs in Canada, especially those in Ontario, will pay attention to this petition. We want them to hear our voices.”

“We emailed a petition letter containing the signatures of 20,000 Canadians to the Minister of Immigration the day before. He replied that he was not available to meet us in person during the pandemic. So, we will continue the campaign.”

Mr. Zhang explained, “There is a law in Canada that if 25 people in a constituency sign a petition, the MP for that constituency is obliged to read the petition in Parliament. This petition is nationwide because we collected signatures in Toronto, Ottawa, Vancouver, Calgary, Winnipeg, and Quebec.”

A passerby, Janis, read all the information on the petition carefully and asked who would receive it. She signed it when she learned that the petition would be submitted to the local MP.

She said, “I know the Chinese Communist Party is evil. They block the Internet. Many Chinese people have fled to other countries, including people who now live in Hong Kong. I know they have been persecuting Falun Dafa practitioners and even harvesting their organs. It’s really evil.”

I Will Support You to the End

Another passerby named Joe said, “I signed the petition when I passed by the Chinese Consulate, and I support you. I know about the persecution of Falun Dafa. The CCP is evil. I have a friend who is now in mainland China. He told me that people inside China cannot visit foreign websites. People there do not know what is going on outside. The CCP also blocks what is going on inside China. What you are doing is very good. I will support you to the end!” 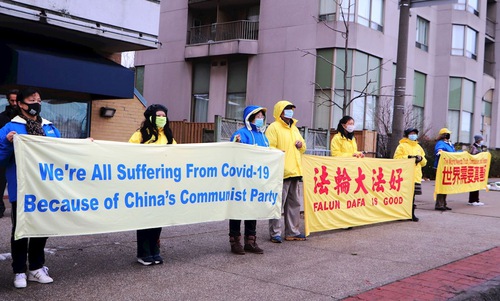 Falun Dafa spokesperson Joel Chipkar said, “China has been persecuting Falun Dafa practitioners for the past 21 years. We call on the Canadian government to enforce the Magnitsky Act, sanction Chinese officials who persecute Falun Dafa, and stop the CCP’s persecution of Falun Dafa.”

He pointed out that Canadian Chinese businesswoman and Falun Dafa practitioner Sun Xi was re-sentenced to eight years by the Chaoyang District Court in Beijing on June 30, 2020. “The persecution continues. It must be stopped,” Mr. Chipkar said.

On October 6, MP James Bezan presented the petition to Parliament. Canada’s Minister of Foreign Affairs, François-Philippe Champagne, responded on November 19, emphasizing that Canada would continue to take every appropriate opportunity to raise awareness of the persecution of Falun Dafa.

“72-year-old Woman Sent to Mental Hospital After Tenth Arrest for Her Faith, Later Sentenced to Three Years and Two Months”