(Minghui.org) Falun Dafa practitioners from North Rhine-Westphalia, Germany, held activities in Essen on November 21, 2020 to introduce Falun Gong and raise awareness of the ongoing persecution of Falun Dafa in China. They demonstrated the Falun Dafa exercises and talked to people about the CCP's (Chinese Communist Party) persecution of practitioners. Many people signed a petition to condemn the persecution and to call for an end to the CCP. 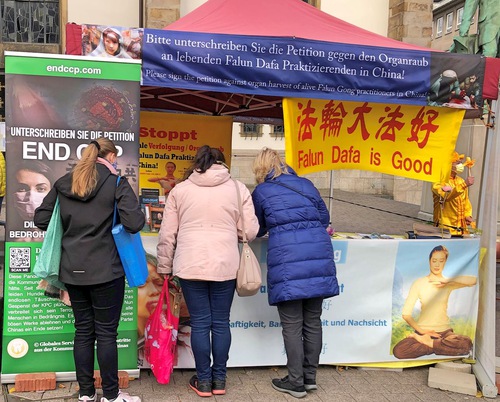 Practitioners held activities in Essen on November 21, 2020 to introduce Falun Dafa and expose the persecution in China. Many people signed a petition to dismantle the CCP. 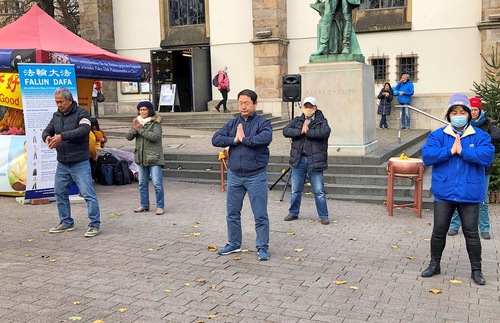 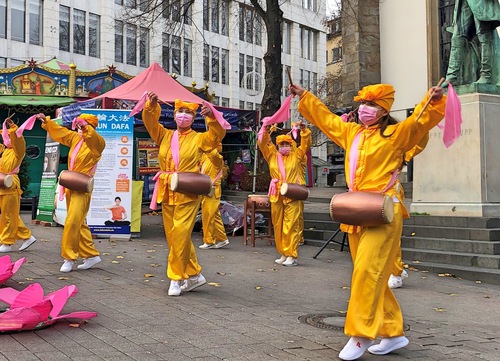 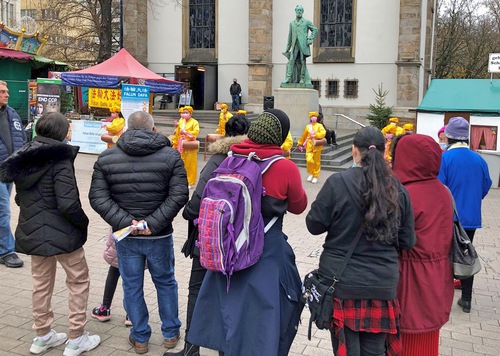 Practitioners have held similar activities in Essen before. In addition to demonstrating the exercises, they also gave a waist drum performance, which attracted many people.

During the exercise demonstration, a practitioner used a loudspeaker to introduce Falun Dafa. He also described how the CCP persecutes practitioners.

Many people immediately signed a petition to end the CCP after they learned about the persecution. Others noticed the QR code on the “Heaven Eliminates the CCP” display board and immediately visited the website on their cell phones to learn more.

A Chinese man in his late thirties was drawn by the waist drum performance and came over to watch. He said that he knew about the CCP's persecution of Falun Dafa. Practitioners told him how millions of Chinese have quit the CCP so they won't be held responsible for its crimes.

The man explained that he had come to Germany for work, and that he was ready to quit the CCP and its youth organizations. Before he left, he took down the practitioner's contact information and said he would tell his friends about withdrawing from the CCP.

A tourist from Croatia was very interested in learning about Falun Dafa and watched the exercise demonstration for a long time. He tried to talk to practitioners in German. A practitioner gave him a leaflet in Croatian, which he immediately read. After reading it, he said to the practitioner, “I want to sign the petition in support of the dismantling of the CCP.”

After reading the information, a young woman immediately walked over to the table to sign. She said, “I know it's just one signature, but I must sign this petition to end the CCP.”

“China Fahui | The Power of Cooperation”