(Minghui.org) Shannon Stubbs, the Shadow Minister of Public Safety and Emergency Preparedness in Canada, talked about risks posed by the Chinese Communist Party (CCP) in the House of Commons on November 17. She urged the Canadian Parliament to prioritize citizens’ freedom and life by taking concrete measures against the CCP.

On the day before, the U.S. National Security Advisor Robert O’Brien spoke at the 2020 Global Security Forum, and pointed out that the CCP has been one of the major influencers on the U.S. presidential election. That is, the CCP not only monitors more than one billion Chinese citizens through surveillance and censorship, but has also expanded such activities overseas through communications tools such as Huawei.

The Threat Canada Is Facing Every Day 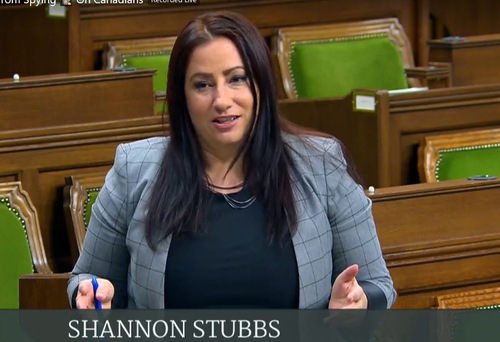 Shannon Stubbs, the Shadow Minister of Public Safety and Emergency Preparedness in Canada, spoke at the House of Commons on November 17, 2020.

Furthermore, as the coronavirus pandemic spread worldwide and governments across continents needed information to protect their own citizens, the CCP provided misinformation and caused huge losses for Canada as well as other countries. Moreover, the government, business, and private citizens' networks in Canada are subject to intellectual property and information theft from China every day.

One example is the 5G network. The Canadian government has yet to make a decision banning Huawei from participating in the 5G infrastructure construction, although information obtained by Canada and other partners had confirmed the company is not trustworthy. This has posed a significant risk to Canadian citizens, businesses, and governments because the CCP could easily obtain information through the backdoor.

Among all the countries of the Five Eyes intelligence alliance, Canada is the only one that has different opinions on the 5G matter than Australia, New Zealand, United Kingdom, and the United States. This would compromise Canada's safety as well as that of its allies in the Alliance.

In early November, The Canadian Security Intelligence Service (CSIS) admitted the CCP’s Operation Fox Hunt is targeting Canada’s Chinese community. As an initiative launched by the Chinese Ministry of Public Safety, it has operated in Canada since 2014.

During the debate, Stubbs and other parliament members asked what charges had been brought against Operation Fox Hunt. She also proposed a comprehensive plan like that implemented in Australia to curb overseas activities by the CCP.

In mid-October, China’s ambassador to Canada Cong Peiwu threatened that, if Ottawa offered asylum to protesters in Hong Kong, the safety of 300,000 Canadian passport holders in Hong Kong could be at risk. Stubbs urged Cong to withdraw such a remark with an apology since a threat to any Canadian is a threat to all Canadians.

CCP Spying Activities in the U.S.

This year’s Global Security Forum, an online event hosted by the Soufan Center in New York between November 16 and 19, focused on global security challenges related to COVID-19 pandemic. The topics discussed included disinformation, extremism, and governance and legitimacy. 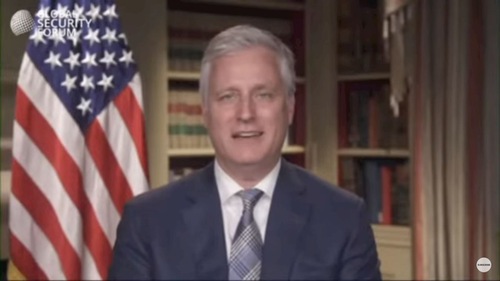 O’Brien said in his speech on November 16 that the CCP not only monitors Chinese citizens, but also assigns social credit scores based on an individual’s loyalty to the regime. More specifically, all the information from text messages, social media, medical and financial records, and even private photos are collected by the CCP and processed via the big data and cloud technologies.

Through the 5G network, the regime could expand such spying activities overseas and establish a global surveillance system to intervene in all nations and governments. For example, when the general manger of the Houston Rockets made a remark supporting Hong Kong protesters in October 2019, China suspended business ties with the team, forcing the NBA and its players to bow to the CCP.

This is how the CCP wants to control the world. Therefore, the international community has to block the CCP's attempts, said O’Brien. Banning Huawei from 5G infrastructure would prevent it from obtaining information through the backdoor and President Trump had successfully achieved this.

Otherwise, the CCP would have access to all the information, from national security to confidential personal information such as health condition, financial difficulty, and even a dream vacation. This would make everyone vulnerable to deceit and financial extortion, he explained.

That is why the risk is too high to use systems such as Huawei as an infrastructure for any democratic country. Right now, the U.S. has led many countries such as the United Kingdom, Australia, India, Japan, Italy, and Germany to counter the CCP. He said that is why Chinese companies such as Huawei or ZTE should not be considered for such purposes.

From what happened to Hong Kong, one can see the consequences of the CCP’s totalitarian rule. Although Hong Kong was expected to enjoy autonomy and freedom till 2047, the CCP bluntly ended it, the same way it suppresses people in mainland China.

This also highlights the mistakes the U.S. administrations had made in the past 40 years – ignoring the human rights issues in China, including the Tiananmen Square Massacre, Hong Kong issues, Tibet topics, and the CCP’s bullying of Taiwan.

It is known to the Western countries that the Chinese communist regime have been controlling economic activities, engaging in unfair trade practices, and stealing intellectual property. But, as people in the free world continued to ignore these issues, they lost sight of them and even mistakenly thought a wealthy China was close to becoming a democratic nation. But that is not true.

Things did not change until the Trump administration. Based on the foreign policy and record level of national security, only the Reagan administration in the past two decades is on par with the current administration, explained O’Brien.

“Zhenbai Li’s Speech at the UK House of Parliament—Brainwashing, Persecution of Belief”

“Husband Pleads for Wife’s Release in an Open Letter”