(Minghui.org) If the fabric of life is woven with countless destinies, and if every crossing in this life is predetermined by hundreds of connections from previous lives, what an endless wait it would take to find the heavenly ladder that leads to one’s true origin.

Huang Chunmei was born the seventh of ten children in a farmer’s family in Taiwan. She grew up in a frugal but warm family. Her father worked several jobs and her mother took care of both the farm work and housework. Chunmei will always remember how her whole family helped each other through difficult times during her childhood.

At the age of 23, Chunmei argued with her parents for the very first time in her life because they had arranged her marriage without telling her.

“One day, I went to look for my sister at her workplace, but her boss told me she had left to go home. She asked, ‘Isn't it your engagement day today?’ My mind went blank,” Chunmei recalled. “I rushed home and cried as I slammed the door open. ‘How could you arrange my engagement without telling me?” she asked. Her father explained in tears, “I have asked around. The man is an honest man. If you don’t agree, I’ll beg his family on my knees to break it off and wash their door lintel [a traditional apology ceremony].”

Chunmei was raised to be an obedient daughter and couldn’t stand to see her father cry, much less be punished because of her. “I told myself to accept my destiny even if it would be an unhappy marriage,” she said. Chunmei accepted her destiny, and day after day, year after year, the heavens didn’t forget her sincere desire to pursue the true Way of cultivation.

On October 7, 1995, Chunmei went for a walk around a mountain near her home and saw several women doing some exercises together. As if she had found her destiny, she instinctively put down her umbrella and copied their movements. However, she was too shy to ask the women what exercises they were doing.

Chunmei went home and deeply regretted not asking them about the exercises. She went to the same place at the same time a couple of days later and waited for a long time but didn’t find any of the women. Given her passive personality, Chunmei would have usually sighed and returned home, but something told her that she shouldn’t give up this time.

“I tried going to the same place at different times for many days and finally found them. I summoned my courage and asked them what exercises they were doing. They told me it was Falun Gong, and I could learn it for free at Yangming Mountain. My heart was shaken when I heard the words ‘Falun Gong,’ as if I had enlightened to something.”

Chunmei and her husband drove to Yangming Mountain but didn’t know where to learn Falun Gong. A vegetable vendor told them to climb the stairs and they would see it.

“Just like the episodes about seeking the Way in legends and martial arts novels that I had yearned for since I was young, we climbed flights of stairs up the mountain, asking people all along the way, and finally reaching a flat area. A man was telling the people in a group, 'Falun Gong is beyond physical exercises. We have to study the Fa and cultivate our xinxing. These are the most important!'” 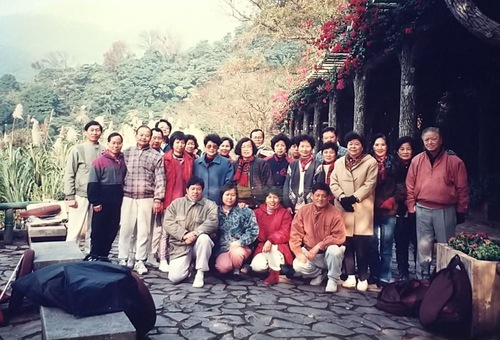 It turned out that the group on Yangming Mountain was the very first Falun Gong group exercise site in Taiwan. “We learned the five exercises and borrowed a copy of Zhuan Falun from the site coordinator Mr. Zheng. He told us it was a precious book and that he would only loan it to us, but never sell it. I held the book to my chest and felt the joy of holding a treasure. To learn the book faster, my husband and I copied the book by hand. I did it during the day while he continued at night.”

Master Xuanzang in Journey to the West walked a 10,000-mile pilgrimage to obtain the true Buddha scriptures. Buddha Milarepa overcame thousands of tribulations to seek the Way. The stories of people longing for their true origin have been passed down generation after generation. Though Chunmei didn’t fully understand the meaning of cultivation at the time, she copied each word with an earnest and pure heart and with the joy of obtaining the heavenly law she had long been waiting for.

Master Li Hongzhi introduced Falun Dafa to the public in China in May 1992, and the practice spread quickly by word of mouth. Practitioners found their diseases had disappeared and their minds had broadened. Their families and friends also started to cultivate after witnessing the tremendous changes in practitioners. Within a few short years, Falun Dafa was welcomed by people all over China.

Falun Dafa was first introduced to Taiwan in 1995, and Chunmei and her husband were among the first group of people there who found their destiny intertwined with Falun Dafa. Chunmei didn’t learn the practice to treat diseases, but she witnessed her husband’s health improve through the practice. He used to take a lot of Chinese herbal medicine, but his health remained poor. He had to take medicine over 200 days each year. After he started to cultivate, he stopped taking medicine and quit drinking. His health markedly improved.

Cultivation took Chunmei’s life into a new chapter. “I learned the meaning of life, which completely changed my view of everything. I gained a bigger heart and started treating things with ease. I no longer lived for personal gain and put others before myself.”

In 1996, Chunmei and dozens of other Taiwanese practitioners went to Beijing for the First Falun Dafa International Experience Sharing Conference. She was moved to tears by fellow practitioners’ sharing about how they had improved their xinxing in the face of excruciating conflicts or humiliation. “Some fellow practitioners in mainland China lived in such hardship, but they truly applied Truthfulness-Compassion-Forbearance in their everyday lives and made tremendous improvements deep down in their thinking.” 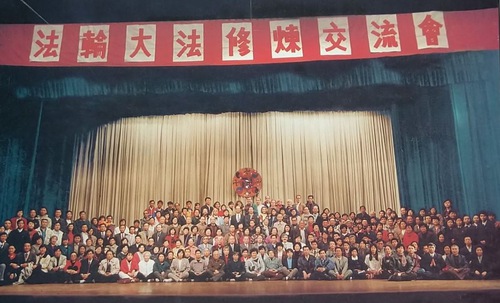 As Chunmei and others were having dinner the day before they left Beijing, a deafening wave of applause arose. Chunmei looked up and saw Master Li standing there, smiling. “Master told us to sit down and finish our dinner and said he would give a talk after dinner. I couldn’t help but approach him and tell him that I was from Taiwan. Master happily shook hands with me. I was so excited afterward that my hands were too shaky to pick up my food. My mind wasn’t on dinner anyway. We cleaned up the table and moved to the chairs that were lined up. Fellow practitioners in Beijing reserved the first five rows for practitioners from overseas.

Master taught profound principles in simple language. Chunmei felt like the luckiest child in the universe. “I’m an introvert. I surprised myself when I took the initiative to talk to Master. He treated me so compassionately and benevolently, like a father. I cried in my heart, ‘I have a master! I have a master!” Every second of that evening was deeply impressed into Chunmei’s memory.

Telling the World about the Persecution

Chunmei couldn’t believe it when she heard the Chinese Communist Party had started arresting Falun Gong practitioners in July 1999. Those kindhearted and tolerant people that she met in Beijing, as well as hundreds of thousands of practitioners around China, started to be slandered overnight. Even worse, they were imprisoned and tortured. Chunmei’s heart was heavy with sadness.

To counteract the CCP’s atrocities, Chunmei, an ordinary housewife, started traveling around the world to participate in activities to expose the persecution. “Going abroad wasn’t easy at that time. We took sleeping bags and had to stay in cellars and old stadiums. I remember it was dark when we reached a stadium one day. It wasn’t until I woke up the next morning that I found I had been sleeping on top of a manhole cover. Many of us took instant noodles with us to cut travel costs.”

Chunmei learned some English words, and in Washington, D.C., Geneva, New York, Moscow, and other places around the world she collected signatures on petitions to stop the persecution.

“I hoped other governments and mainland Chinese tourists would learn about the persecution and support justice. Such a great cultivation practice shouldn’t be persecuted. It belongs to the world. I have personally benefitted from it and have the responsibility to tell more people.”

As the CCP persecution gained more attention, the number of practitioners in Taiwan surged. Close to a thousand exercise sites were established around Taiwan. Hundreds of thousands of Taiwanese started to practice Falun Dafa. 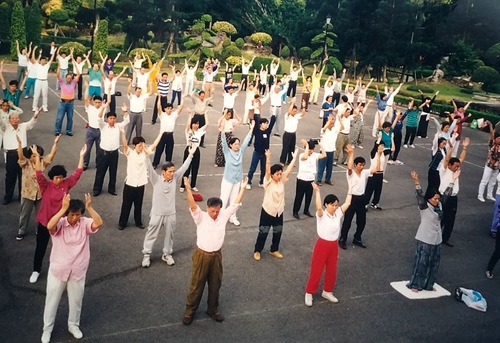 Chunmei (second from right in front row) and fellow practitioners do the Falun Gong exercises in front of the National Chiang Kai-shek Memorial Hall.

Chunmei’s experience is similar to thousands of Falun Gong practitioners around the world. “The situation around the world has changed drastically in recent years. I have no worry or fear, no matter what happens, because I strongly believe that divine beings are in control.

“I have been blessed with a sacred destiny. I must hold on to it tightly. No words can describe Master’s profound compassion. All I can do is tell more people that Falun Dafa is great and the rare chance to cultivate that we have been waiting for is here.”

“China Fahui | Walking Steadily the Path of Validating the Fa”

“Family of Three Sentenced for Their Shared Faith”