(Minghui.org) Ms. Chen Xianfeng was a teacher in China. Dissatisfied with the Chinese Communist Party’s (CCP) dictatorship, she longed for freedom and democracy. 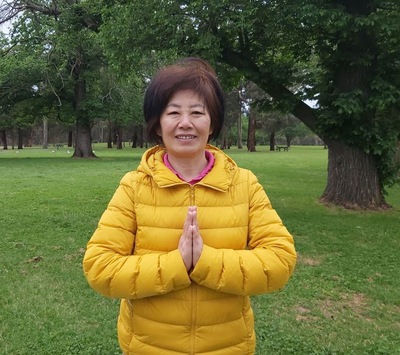 “During the days that led up to the Tiananmen Massacre on June 4, 1989, I took my students to the streets to support the college students. We also collected donations to help them. Because I often criticized the CCP’s propaganda, the school and local government persecuted me. They took away my teaching position and I was demoted to maintenance staff at my school.”

One elderly official, a Falun Dafa practitioner, encouraged Ms. Chen. He told her about Falun Dafa and showed her the exercises. She did not become a practitioner at that time, but “Falun Dafa is good” took root in her heart.

Ms. Chen could no longer endure the corrupt government and moral degradation in China, so she joined her daughter in Australia.

“My mood was bad after I came to Australia. I often lost my temper, I could not sleep, and I frequently wept. My life had no meaning, and my health deteriorated. I was diagnosed with trigeminal nerve pain, which doctors call the ‘worse pain’. Let’s say when a woman gives birth the pain level is eight out of ten—this pain was ten. When the pain came there was no warning. My face felt like it was pierced with needles. It felt like a monster was on my face. I could not laugh, could not shout, I could not eat anything cold… If anything triggered it, the heart-stabbing pain was overwhelming.”

Ms. Chen continued, “When it got bad, I could not brush my teeth, and the pain would come on every few seconds. Doctors said the only treatment was pain medication, lots of it, and I would need to take more and more medication. When the pain stopped responding to the medication, then brain surgery to cut the nerve would be the last thing they could do. I was under stress every day—I thought about killing myself to end my suffering. I looked up the directions to the ocean so I could jump in.”

Ms. Chen was admitted to the hospital again for severe nerve pain in October 2019. When she was discharged, her doctor emphasized the importance of taking medication on time, and that she would be doing it for the rest of her life. Ms. Chen did what she was told. She also tried acupuncture.

A friend suggested that she try praying. Ms. Chen’s daughter strongly encouraged her to give it a try. When she went to church an amazing thing happened, “…I heard the Falun Dafa exercise music. I decided to look for Falun Dafa practitioners.”

Soon after, Ms. Chen and her daughter saw a group of practitioners handing out Falun Dafa pamphlets outside the local library. Not sure of her daughter’s opinion of Dafa, Ms. Chen did not approach them. She planned to go on her own the next day.

Ms. Chen did not speak English, and it was her first time traveling to the city by public transportation. By the time she arrived at the library, it was already late afternoon. She did not see any practitioners.

She tried again the following day. Still no practitioners.

“With a sad heart, I headed home… Tthe train changed route midway, and I didn’t know how to get home. When I phoned my daughter, she was worried and angry… I did not get home until late that night.”

One Saturday in January 2020, on her way to an acupuncture appointment, she heard the familiar music.

“I was so excited, I immediately joined the practitioners. I finally began to practice Falun Dafa!” Ms. Chen could not contain her emotion as she talked about meeting practitioners that day. 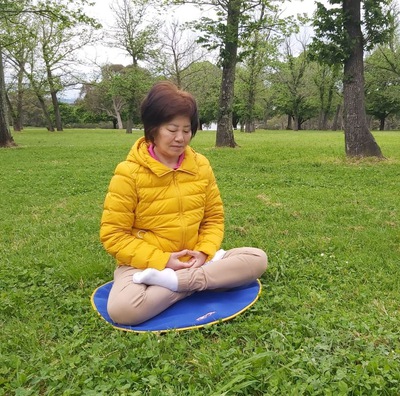 Ms. Chen does the fifth Falun Dafa exercise, the meditation.

Since that day, Ms. Chen has studied the Fa and done the exercises every day. In the beginning, she was only able to sit in the half-lotus position, but she can now put both legs up.

“My body and mind went through dramatic changes. I used to resent my family and friends—I did not like the way they embraced the CCP ideology. I felt they were harming themselves and others. We had many heated arguments...I would get so upset afterwards that I wept and could not sleep.

“After I began reading Zhuan Falun my mindset changed and my mood improved. I no longer got angry for no reason, and my quick temper disappeared. My friends commented that not only do I look younger, but I'm now kinder and easier to talk to.”

In May, Ms. Chen decided to stop taking pain medication.

Ms. Chen tearfully said, “My pain disappeared and I became healthy. I feel the changes are miraculous. I am so grateful to Master!”

“I put more effort into my job, and my colleagues now say I'm a different person. My boss is impressed and asked how I transformed from a frail, thin lady, to a strong energetic person. He tells me to take a break and rest, but I don’t feel tired, I have so much energy!

“I tell everyone my personal experience. I just want people to know that Falun Dafa is amazing. If you received a truth clarifying phone call or pamphlet, please treasure it and do not miss this precious opportunity”