(Minghui.org) Today's news from China includes incidents of persecution that took place in 35 cities or counties in 14 provinces, where at least 93 practitioners were recently persecuted for their belief. 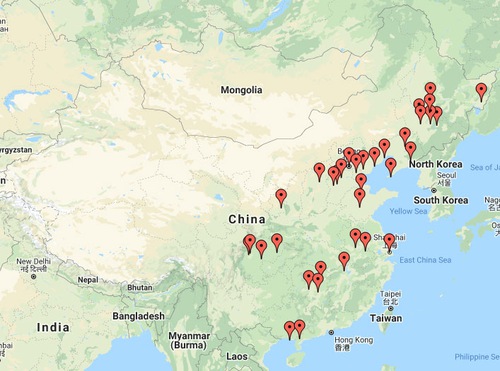 Over 10 practitioners were arrested by Wuhu City Police Department on September 27, 2020. Ms. Yu Guiying, Ms. Yang Xiuying, Ms. Ding Qingli, and Ms. Lu Shoumei have their homes ransacked and their Falun Gong books, computers and some materials were confiscated. They were taken to the police precinct for interrogation. Most of them have been released by the evening.

2. [Shanghai] Mr. Victor Wang Sentenced to One Year and Two Months in Jail

Mr. Victor Wang was tried without notice on the afternoon of October 23 by Fengxian Court. He was sentenced to one year and two months in jail.

Ms. Xu Meiying, works for 858 Farm, was arrested when she was talking about Falun Gong at a market in the morning October 31, 2020.

Among them, Tan Chunyi was sent to Hulin Detention Center. Teng Jingui, Sun Xiujin, Xu Xiuqin and Li Rongqin were put under criminal detention and sent to Jixi City Detention Center for further persecution. Xu Meiying has been released.

4. [Beijing] Mr. Li Yiheng Scheduled to Be Tried on November 10

Mr. Li Yiheng was arrested on September 19, 2019. It was reported that he had been detained at Daxing District Detention Center. He was scheduled to appear in court on November 10.

Ms. Lu Yuzhi, who lives in Sonjiang District, was home-ransacked by over 10 policemen in the morning of October 30, 2020. They confiscated 3 books and sent Ms. Lu and her daughter Ms. Ye Ying to the Sijing Police Precinct. The mother and daughter were kept in separate rooms. They were verbally abused and ordered to renounce their belief. The police had come the day before, but since the practitioners weren’t home, they returned on the next day.

At around 5pm, the mother and daughter were interrogated and threatened. Around 6pm, they were released.

Later, the policeman admitted that they made a mistake in arresting the practitioners, but they didn’t offer an apology nor any explanation.

Ms. Chang Meijie's husband received a call from Ma Mingwei, an agent of Beidaihe New District Police Station on October 19, 2020. He threatened over the phone that if his wife refused to renounce her belief in Falun Gong, their daughter wouldn’t be able to continue her job as a teacher any more.

They were all forced to write statements to renounce Falun Gong and then sent to the county's hospital for physical check-ups. The police also took their pictures and blood samples. Ms. Gai Feng and Ms. Wang Qingbai were released at night. Others were sent to detention centers.

In addition, several other practitioners and those who already gave up their belief were also harassed and forced to write statements to renounce Falun Gong.

When Mr. Zhang Wei was waiting for the train at 7am on October 19, 2020, a policeman checked his ID and brought him to the policeman's office. Mr. Zhang's book Zhuan Falun was confiscated. The policeman took Mr. Zhang back home and threatened to send him to a detention center or a brainwashing center for six or seven days with the cost of 300 yuan a day.

Ms. Ning Chunxiang works at the Yejiping Town Agriculture Business Bank. She was arrested by officers from the Yejiping Police Station from her workplace in the morning on October 13, 2020. Policemen ransacked her house. She was released later that day.

Ms. Liu Gangli received a phone call on November 2 from policeman Sun Hongliang from Qilu Police Precinct. The policeman demanded her to report to the police precinct periodically, or he would arrest her.

Ms. Zhang Xiumei was harassed on October 27, 2020 by Li Chongzhen from the Domestic Security Office and two others from Political and Legal Affairs Committee. The officers videotaped and threatened her. They also attempted to force her to sign a statement renouncing Falun Gong.

Two female practitioners were arrested and taken to Jiangnan Police Precinct from a hair salon in Fengman District on November 2, 2020. One practitioner is in her 70s and the other is over 80. Policemen searched their bags and confiscated about 30 calendars with information about Falun Gong in them.

Ms. Yang Kexin received a phone call from a woman who claimed to be with Fengbei District residential committee in the morning on October 27, 2020. That woman asked Ms. Yang to go to their office, but she refused to comply. Half an hour later, the same woman called again using a different number, but Ms. Yang insisted that she wouldn’t go.

After 3 pm on the same afternoon, Ms. Yang's husband received a similar call and was requested to sign a statement on behalf of Ms. Yang to renounce Falun Gong. He refused to comply.

On the next morning, the director of Fengcheng City Political and Legal Affairs Committee called Ms. Yang's son and also asked him to sign the renouncement for his mother, but he refused.

Ms. Gao Ru lives at Dayahuzhai Village. When she was selling apples on the street on the afternoon of October 22, seven officers came with village director Wu Xiangdong. They asked her to sign a statement to renounce Falun Gong, but she refused to comply. Then they asked for the whereabouts of her husband, who is also a practitioner, but was rejected.

Policemen broken into Ms. Zhangjun and his wife Ms. Miao Yuhuan's house and forcibly arrested them at around 6:30 am on November 3, 2020. They ransacked the house and confiscated several video disks, several Falun Gong books, a laptop, two Falun Gong posters, one calendar and a few radios.

Wang Qiying and Mo Deqing were forcibly arrested and sent to a brainwashing center on October 22, 2020.

Wang Simei has been detained at the brainwashing center for over two months.

Three government agents broke into Lei Zhouqiong's son-in-law's house on November 2, 2020. They forced Lei to renounce Falun Gong and took his picture against his will. A few days ago, the authorities harassed Lei’s son-in-law over the phone.

Ms. Wang Hehua was arrested by officers from Chongqinglu Police Station and detained at Weizigou Detention Center for over 10 days. She has been released.

Ms. Fu Guixian was arrested on October 28 or 29. She is currently under detention.

Policemen went to Ms. Xue Luanzhen's house twice in September. They tore off the couplet with messages about Falun Gong on her front door.

Policemen found Ms. Xue's second son on October 29 and forced him to sign a statement to renounce Falun Gong on behalf of his mother, by threatening to arrest her.

Ms. Li Cong was sentenced 6 years in jail. She was sent to Jilin Province Women’s Prison in October 2020. She was forced to sleep at 12 am and wake up at 3 am, and to sit on a small tool the rest of the time. In order to force her to give up her belief, the guard often gave her side dishes only and instigated the prisoners to abuse her.

Ms. Zhu Cuihua was arrested and her house was ransacked on October 28, 2020. Currently she is detained at Changsha City No.4 Detention Center.

Since August 2020, government agents have often harassed Falun Gong practitioners and their families, in attempts to force them to renounce Falun Gong. These practitioners are Liu Xiuying, Zhang Fuzhen, Zhang Shiguo, Sun Weizhong, and Cui Hexian.

Recently many practitioners have been harassed by residential committee staff, who tried to force them to sign a statement renouncing Falun Gong. These practitioners are Jiang Huifang, Wen Dongqin, Lin Xiaoyan, Shui Xian and Tan. Some practitioners’ family members were also harassed.

Ms. Luo Ling’s son, who is doing business in another city, received a call from a community worker and was asked to persuade Ms. Luo to find them and sign a statement to renounce Falun Gong. That person threatened to arrest Ms. Luo if she didn’t comply. For practicing Falun Gong, Ms. Luo was sentenced to one year and a half in prison, given three years in a forced labor camp and was taken to brainwashing sessions three times. Her grandson was also implicated in the persecution, such that he wasn’t allowed to apply for government jobs, which usually have better benefits than other jobs.

Ms. Su Shujuan’s son received an offer as a prosecutor. During his political background check, the authorities found Ms. Su to be a Falun Gong practitioner. They pressured her son to take her to the residential committee’s office and have her sign a statement to renounce Falun Gong. Ms. Su’s husband was also pressured.

Ms. Sun Jinrong was ordered to sign a statement to renounce Falun Gong by policemen for three continuous days from October 24 to 26. Ms. Sun firmly refused.

Policemen and town government officials went to Ms. Xu Yuanzhen's house to force her to renounce Falun Gong on October 27, 2020. They threatened to have her son-in-law’s workplace fire him if she didn’t comply.

Mr. Fan Zhigong was arrested on the street in the morning on April 14, 2020. Policemen ransacked his house and confiscated his printer and some personal property. They sent Mr. Fan Zhaigang and his wife Ms. Su Shuang to the city detention center for 14 days.

Ms. Deng Yuli was arrested by officers from the Xinlixiang Police Station at around 9:30 am around November 4.

Ms. Tang Canchun's house was broken into by four policemen on the afternoon of November 3, 2020. The police forcibly took her photos. One of the policeman asked if she had Falun Gong fliers, if she made any Falun Gong materials or had she ever contacted with other practitioners. They warned her not to go out to distribute Falun Gong materials.

Ms. Wu Jun, 79, and her daughter Hongmei were arrested in September 2020. Ms. Wu Jun was put under house arrest and Hongmei was sent to a detention center.

Ms. Ai Yanjing was arrested at home at around 9pm on October 29, 2020. She was sent to Shengli Police Precinct and now is detained at Shenyang City Detention Center.

Policemen ransacked the hotel owned by Ms. Ai on August 29, 2020. They confiscated a lot of personal belongings and arrested five practitioners working there. All five practitioners were released at night, but Ms. Ai was forced into displacement, before being arrested two months later.

Wang Haigan, Deng Mingzhi, He Dacui, Lu Chengmin, Zheng Dongfen have been detained more than 15 months. They were scheduled to appear in court on November 5.

Tang Zhikai was tried on November 4 after being detained for over 14 months at Dazhu County Detention Center.

The village secretary called Ms. Zhao Zhiqin and Ms. Jing Juan's families for three continuous days at the end of October 2020. He attempted to force the two practitioners to renounce Falun Gong and threatened to implicate their families if they didn’t comply.

Policemen broke into Ms. Cui Jihua's house in the morning of October 22. They confiscated several amulets and sent Ms. Cui to the police precinct. They interrogated her on where she got these amulets. At noon, Ms. Cui was released after her daughter signed the interrogation record.

Ms. Li Cuiping and her son Mr. Ma Shan were arrested at home on the morning of November 3, 2020. Their house was ransacked and their whereabouts are unknown.

Mr. Li Jianguo went to the local market to talk to people about Falun Gong and how the communist regime covered up the pandemic on October 18, 2020. Policemen arrested him around 10 am and sent him to Liyuan Police Precinct. He was released at 3pm.