(Minghui.org) Falun Dafa practitioners in Queensland continue to raise awareness of the ongoing persecution in China. They held events at four different locations in Queensland’s Christmas markets on November 5, 2020. People stood in line to sign the petition, which calls to end the CCP (Chinese Communist Party). Some said, “You are doing the right thing! You are changing the world!” 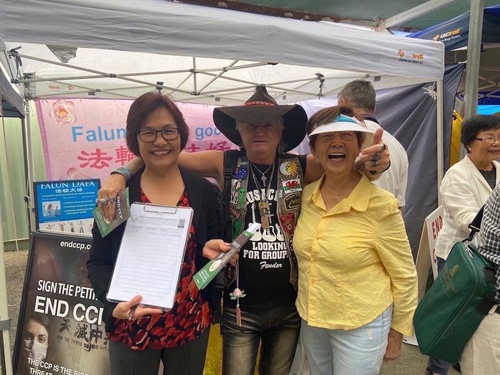 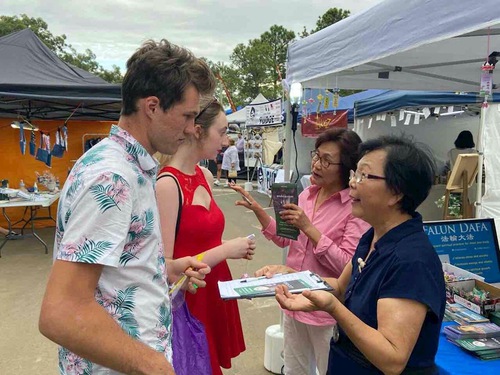 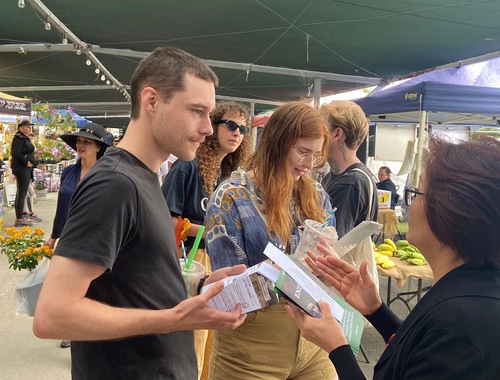 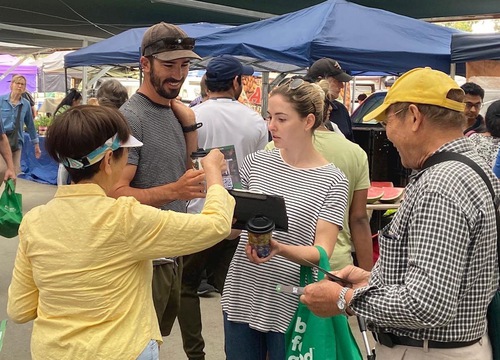 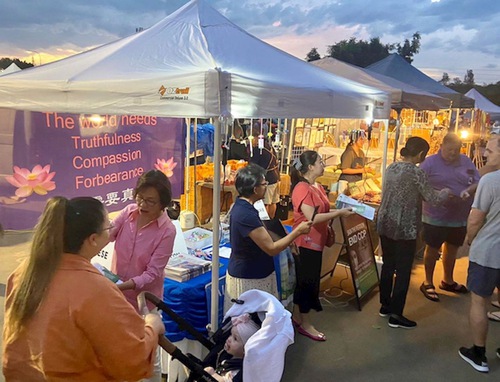 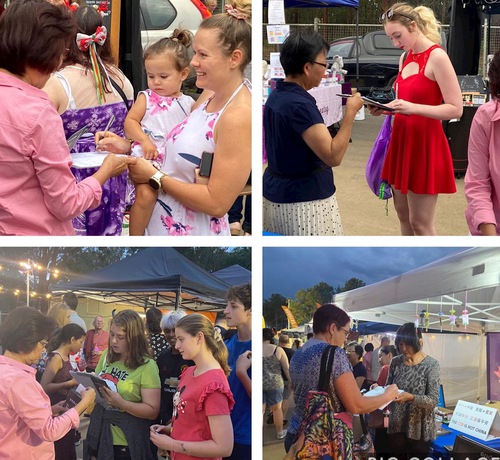 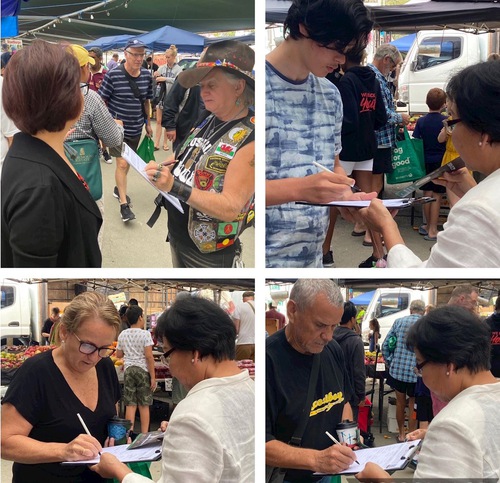 Practitioners held events at all four Queensland Christmas Markets on November 5, 2020, to tell people about the persecution.

Some residents said that they’ve seen information about the persecution of Falun Dafa. Those who signed brought their friends or family to sign. In some cases every family member came and signed. After understanding the truth, several Chinese decided to quit the CCP organizations.

After she signed the petition, one lady told a practitioner, “I have over a hundred employees in my company and I will definitely tell each and every one of them about this persecution. This is very important! Thank you very much!”

Persecution of Belief Should Stop 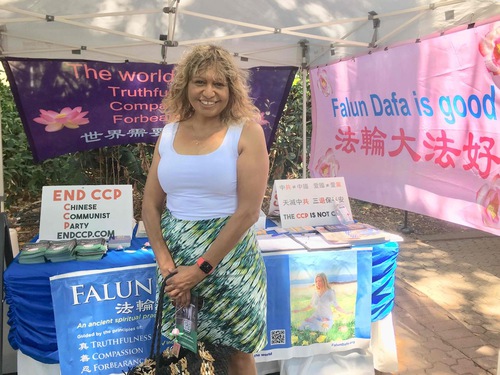 Ms. Gillian Mailman is an aboriginal Australian and a very successful entrepreneur. She owns several companies in Queensland and Victoria.

After seeing the banner: “End the CCP”, she said, “We come into the world equally and everyone has their own destiny. Persecution of religion and belief should never happen and it should stop!”

She talked to practitioners in Melbourne and learned about the forced live organ harvesting. She thinks it's the most terrible and shameful thing in the world. She said, “This persecution ignores basic human rights! The lives of those Falun Dafa practitioners were ended simply because their DNA was paired with people in need of organs.”

She strongly agrees with Dafa's principles of Truthfulness-Compassion-Forbearance. She said she will try her best to have more people in the world understand the truth about Falun Dafa and how it is being persecuted by the CCP.

Calling on the Australian Government to Stay Away from the CCP 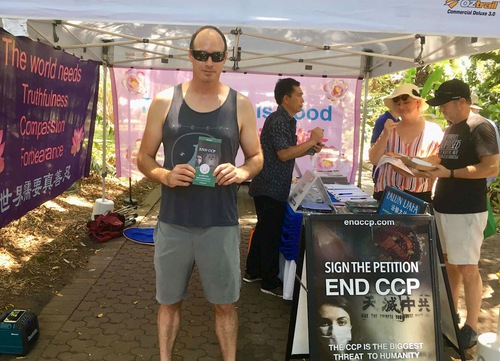 Mr. Jake Artlew called on the Australian government to stay away from the CCP.

Mr. Jake Artlew is very supportive of practitioners. He said, “Falun Dafa never harmed anyone and the CCP has no reason to slander or persecute practitioners. I am very sympathetic to the people in China because they do not have many choices and aren’t even able to protest. This has caused Chinese people to sacrifice their lives in exchange for freedom. This should not happen!”

Referring to the CCP hiding the truth about the pandemic, Jake said, “The CCP has been persecuting those whistle blowers. The CCP could have openly admitted its mistakes and told the world to be prepared—but it did not do it! It continued covering up everything with lies. I think the CCP is also controlling many international organizations and these organizations should have been independent adjudication agencies. However, they’ve become very corrupt. We can see that they’ve compromised with the CCP. For example, why is the United Nations ignoring Falun Dafa and other important human rights issues?”

Jack continued, “The CCP is like a tyrant that does not respect human rights and is full of lies. I think the Australian government should re-consider its trading partners and break away from the CCP. Australia should also stay away from international institutions and form alliances with democratic countries. The CCP is like a thug, no one really trust them.”

Business Owner: “Forced Live Organ Harvesting Has to Be Stopped!” 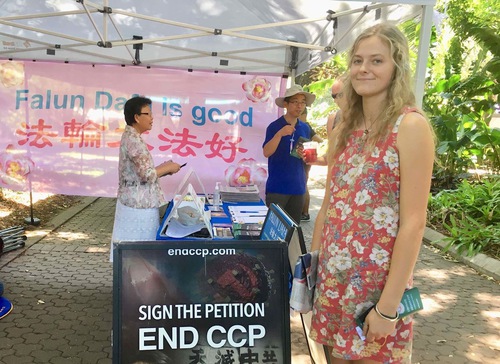 When business owner Ms. Georgia Neil saw the practitioners' booth, she said, “No communism! I absolutely support this petition to end the CCP regime. The persecution of Falun Dafa is too terrifying! It's great that you are here! I will pay more attention to this issue.”

“Forced live organ harvesting should be stopped! My friend told me about this when I first started my business. I am very lucky to have grown up in a free country. I was in disbelief when I heard how practitioners are being persecuted by the CCP.” She said, “Truthfulness-Compassion-Forbearance is very good! If the truth had not been covered up by lies and deceit, many more people would have known about this. The CCP is covering up the truth because genuine things like this are very hard to see on the news!”

“The Truth Is Often Hard to Come By” 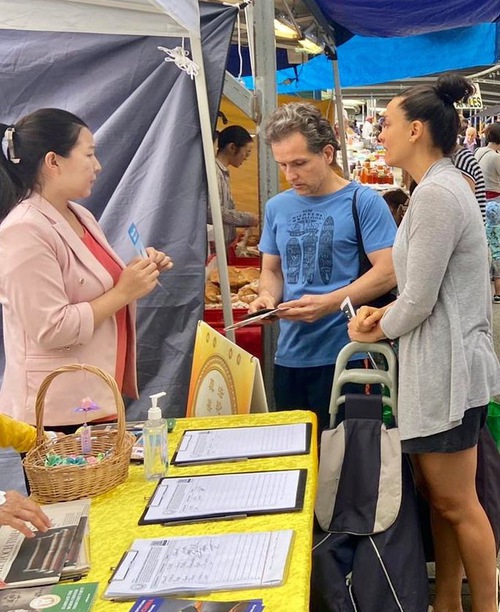 Monica Siwa (first on the right) and her friend thanked practitioners for exposing the persecution.

Ms. Monica Siwa and her friend came to the Mt. Gravatt Farmers Markets and stood for a long time in front of the Falun Dafa information booth. They asked for information about the petition to end the CCP. Monica said, “You are doing something very important! The truth is often very hard to come by and now most of the media are trying to cover up the truth. I am very thankful that you are doing this!”

Monica and her friend asked about the human rights abuses in China and wished the practitioners success.

Business Owner: “You Are Changing the World!”

When Benbedict, a jewelry business owner, saw practitioners at the market, he gave them a very warm welcome and said excitedly, “Falun Dafa practitioners are doing the right thing! You are changing the world!”

After Benbedict talked to a practitioner at last year's market and learned about the film, Letter From Masanjia heattendedthe screening in Sunnybank.

He said, “I tried telling my Chinese friends about it but it seemed as if they did not want to listen. They kept saying that the CCP has improved the lives of Chinese people. But look at the wealthy Chinese in Australia. Where did their wealth come from? It was stolen from the Chinese people and it all came from corruption. Look at the Chinese students—they are told by the Chinese consulate not to talk to reporters. If they do, their family members back in China will be in danger! This is too terrifying!”

Benbedict said, “I admire Falun Dafa practitioners! Everything you say is very true and powerful! Please continue what you are doing! I support you!”