(Minghui.org) U.S. Secretary of State Mike Pompeo spoke at a virtual event of Ministerial to Advance Freedom of Religion on November 16, 2020. He condemned the religious persecution by the Chinese Communist Party (CCP) and called on the world to unite and secure people’s fundamental rights and overcome tyranny. 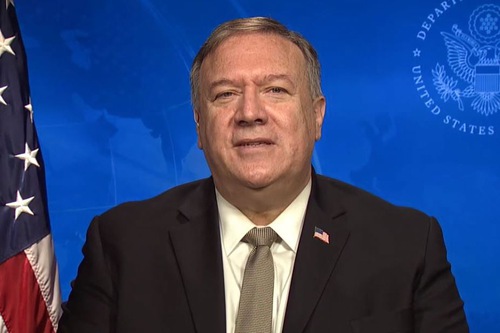 U.S. Secretary of State at the virtual conference

Secretary Pompeo said that the U.S. State Department has hosted the Ministerial to Advance Freedom of Religion in the past two years, which were the largest human rights events in the department’s history.

This year’s Ministerial to Advance Freedom of Religion took place in Poland, and Secretary Pompeo thanked the Polish Foreign Minister Zbigniew Rau for inviting him to talk.

Secretary Pompeo said that this event “brings together different nations and brings together different traditions. But commonly, we share conviction in the fundamental dignity of every human being, believers and non-believers alike. And my nation’s founders described the unalienable rights of every man, woman and child. Assaults on religious freedom or belief are assaults on the first of those rights. They are tragically happening across the world.”

He condemned the Chinese Communist Party for waging a war on faith. All religious believers, including Christians, Muslims, Buddhists, and Falun Gong practitioners, are targeted and no one is spared. But he is also delighted to see the progress the world has made in “rallying toward the noble cause.”

“Let’s keep up our work to secure freedom in our home countries, and speak up on behalf of victims of religious persecution all around the world. Let’s proceed with the understanding that faith is eternal and tyranny must be overcome.”

“China Fahui | Using Every Opportunity to Save People”