(Minghui.org) Three decades ago, Su Cheng was a child that others envied. Born into a prominent family, he needn't worry about lacking anything materially. But his prestigious family background carried pressure, and from a young age he felt that he had no control over his present or his future, because his family had already mapped it all out.

The schools he should attend, what he should say, what important people he should interact with had already been decided for him. Su Cheng had no say. “Every family has its problems. In this enormous family, everyone has their gratitude and grudges. If someone wanted to complain to me, I could only digest what they said, I could not react, because I knew that in the end it would all come back and blow up on me,” he explained.

In what should have been his carefree youth, Su Cheng lived as if constantly walking on thin ice. “In that atmosphere, I started to get headaches. I would take a pill with no results, so I would take two pills with no results. I could only lie there and wait a long time to fall asleep. I was only in elementary school at the time, but I had already had to deal with way too much.”

Life was tough for him. If he spoke or if he remained quiet, if he did something or if he did nothing, he would still be chastised. “For example, if someone asked me about my plans for the future at some social occasion, and I replied normally by expressing my thoughts and understandings, it would lead to verbal abuse and condemnation. They would say I was leaking the family's inside information and that I would become a degenerate.”

As he grew older, Su Cheng noticed that his relatives were all toasting their wine glasses in celebration at public social occasions, but the fighting and scheming behind the scenes made him feel deeply hopeless and hurt. “I didn't know why the things I thought were right, the adults would say were wrong. I didn't know why it was so hard to persevere at trying to be a good person. The things I experienced as I grew up continuously attacked the understanding I had of, and yearning I had for, a beautiful world.”

After countless slaps in the face, Su Cheng started to lie, to cheat and to cut classes. He became addicted to internet cafes and wanted to kill himself. “My grandfather died when I was in high school. Seeing my family fight over the distribution of the inheritance, their forceful arrangements for my future, and the pressure from a heavy school workload, I was on the verge of falling apart. I really wanted to shout, 'I don't want this, I don't want to study, I don't want to help you cheat people, I don't want any of this.' At the time we lived on the 27th floor, and I let my mother know that I wanted to jump from the building.”

Su Cheng really did not know what he wanted. As he waded through the pressure and the challenges of his life, the only thing that really kept him going was his yearning for spiritual cultivation and his desire to preserve his morals.

“I believed in Catholicism from the time I was little. I had been baptized, been an alter boy, I had read the Bible, I had read the Ten Commandments, but I did not know why people did not behave in accordance with the teachings in the Bible.

“Many of my books in elementary school had stories about [Buddha] Sakyamuni. I also really liked the Monkey King in [the classic Buddhist text] Journey to the West subduing monsters and eliminating demons. I often thumbed through these books and pondered cultivation practice.”

Human life is like a journey. Stories of the characters in Journey to the West passing through arduous challenges on their journey to obtain righteous fruition planted a seed in Su Cheng's young heart. The Tang Monk in Journey to the West said, “It's difficult to obtain a human body. It's difficult to be born in the Eastern Land. It's difficult to encounter righteous Fa. Having all three of these together is the most fortunate thing.” Su Cheng had never imagined that he might also be someone from the Eastern Land with the great fortune to become a cultivator.

Returning to One's Original True Self

After graduating high school, Su Cheng studied at Sun Yat-sen University in Taiwan. “When I was in high school I had the chance to come into contact with qigong and Taichi, because of my family background. At university, a professor and a senior student recommended Falun Gong [also known as Falun Dafa].” These seemingly coincidental incidents made him aware of the greater benefits meditation brings to mind and body than other forms of exercise.

“In my fourth year of university, after I was no longer busy with my research project, I thought the opportunity had arrived. I started setting my alarm clock and resetting my biological clock, and went out in the early morning to the campus practice site to learn Falun Gong with everyone

“I borrowed Zhuan Falun, the main book of Falun Gong, from a fellow practitioner and read five chapters without stopping. I thought I should stop reading because I worried that I would have no more book to read the next day, because the book was so good. I later came to understand that I could read the book again and again, as each time I could gain different understandings and be raised up.” 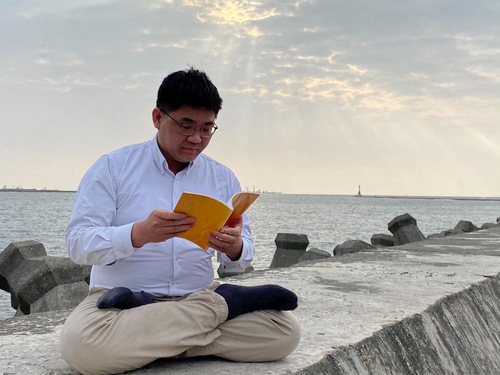 Su Cheng read all the Falun Dafa books that had been published within a month. He was deeply convinced by the profound principles in the books, as if every word was striking into his soul. “China has a saying: 'Bitterness ends, sweetness begins.' I used to envy people who had grown up seemingly carefree, without worries. But after I studied the Fa, I was deeply aware that the 10-plus years in which I had grown to maturity were all prepared for me to obtain the Fa.

“Master’s Fa principles are clear and easy to understand, and truly profound. I completely agree with every word of his teachings.”

Su Cheng became enlightened and found answers to his long-time questions, such as, “Why is the world so chaotic? Why should I persevere at being a good person? Why should I thank those who hurt me?

“Master's Fa principles explained why I had encountered all of those things in my life, and I became clear about everything. When I sat in meditation I felt that Master had removed so much serious karma from his disciples. I felt that all that I had suffered in the past was really nothing.”

“In the past, I had been calculating and aggressive. I would not compromise in conflicts. But after practicing Falun Gong, Master said that practitioners should be good people and become even better people. I started to think from other people's perspectives and asked myself not to fight back when attacked or talk back when insulted. I started to learn how to look inward and think about what I had done to relatives in the past. I knelt before my parents and apologized for the things I had done and the bad thoughts I had about them and sincerely asked for their forgiveness.”

Su Cheng felt that he should volunteer his time to help more students and staff on campus come into contact with Falun Gong. He became president of the Falun Dafa Club and set up a series of events on campus to introduce the practice, including screening founder Master Li Hongzhi's video lectures, teaching the exercises and a number of different performances and cultural activities. The results were very good, and the club went from having just a handful of members to around 30. 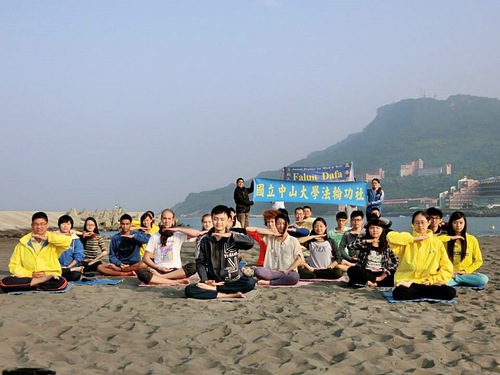 Members of the Sun Yat-sen University Falun Dafa Club meditate on the beach at Sizihwan in Kaohsiung.

After cultivating in Falun Dafa for three years, Su Cheng went through a major test that reinforced his understanding of the importance of firmly believing in Master and the Fa. “I suddenly discovered that all the organizational and leadership skills I had accumulated over the years had all disappeared. My formerly strong strategic mind became only capable of menial tasks.”

Thinking carefully about his mentality over the last few years, Su Cheng broke into a cold sweat. “Since I was a child, I had believed that man could conquer Heaven. When a simple reply was needed, I could calculate more than a dozen possible responses in my head.

“When I was a high school student I used my family connections and my abilities to take my younger brother overseas with deficient boarding documents.

“I realized that for the past three years, I had incorporated the abilities, habits, and organizational theories that I used proudly among people into my cultivation practice. I used ordinary people's methods and calculated what the results of certain activities would be. But Dafa is pure, and things should not be done with intentions, and certainly should not be done to prove something to someone.”

One month later, his abilities returned to him.

Master said in Lecture One of Zhuan Falun:

“I’ll tell you a truth: the whole process of cultivation is a process of constantly getting rid of human attachments.”

Su Cheng felt that this sentence of the Fa refers directly to the essence and core of cultivation, and reveals a heavenly secret. After 30 days of introspection, Su Cheng felt that he had been deeply cleansed by Master's compassion, and he had become like a new person. He felt completely reborn.

“The family and friends who have been with me since I was young are happy to see that I have direction in my life. I know what I want to do, have become more honest and kind, and that I understand how to be considerate.

“Someone once asked me if Falun Gong was good and a classmate friend of mine said right away, “Falun Gong is good. Look at what a great change Su Cheng has gone through.'

“Colleagues said that I make them happy. Some people asked me how I can live in such a relaxed manner and how I can be so calm in dealing with so many things. It's because I know that Master has given me the best of everything, and all I can do [to show my gratitude] is to practice cultivation with determination by following [Dafa's principles of] Truthfulness-Compassion-Forbearance when I encounter tests.”

In such a complicated world, it really is not a simple thing to remain kind and hold fast to your morals. “When I was in high school, an official once asked me what I aspired to do when I grew up. I remember very clearly that I told him I wanted to help more people. After obtaining the Fa, I understood more why I would answer this way. Because only Dafa can truly help people solve all of the problems encountered in their lives.”

“78-year-old Woman Dies after Repeated Harassment, Arrest and Detention for Her Faith”