(Minghui.org) Today's news from China includes incidents of persecution that took place in 22 cities or counties in 8 provinces, where at least 50 practitioners were recently persecuted for their belief. 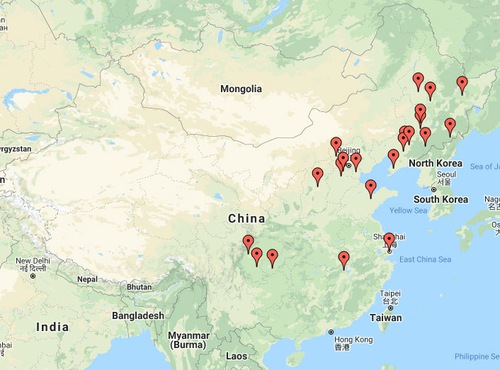 Mr. Wang Jianxin was notified over the phone by Xu, deputy director of the Jiuting Police Station, on Tuesday October 13, 2020, that the police station would collect his handwriting on Thursday or Friday. He said that this was discrimination against him and did not agree.

When Mr. Wang arrived home from after work on October 15, he was blocked by three officers. The officers dragged and handcuffed him. One of them beat his thigh several times with a stick.

Mr. Wang was taken to the police station, where his handwriting was forcibly collected.

Eight practitioners from the Nanxigudi Residential Community were arrested at Ms. Zhou Liangchun’s home around October 24, 2020.

Of the eight practitioners arrested, six have been confirmed, including Yuan Rong, Zhou Liangchun, Yu, Yuan, Zhang, and Juanjuan. Names of the remaining two practitioners are not yet known.

Mr. Zhang Zhen, 76, was arrested by the local Domestic Security officers on November 1. 2019. He was tried and sentenced to a three-year prison term in August 2020. The court did not notify his family of the trial.

Ms. Wang Xifang in Xiaozhan Village, High-tech Zone, was arrested by officers from the High-tech Zone Domestic Security Division in 2019. She was later released on bail.

The Domestic Security Division brought charges against Ms. Wang in 2020. The High-tech Zone Court was originally scheduled to hear her case on October 10. She was hospitalized however, and the trial did not take place. The court rescheduled the trial for October 29.

Ms. Chen Xiumei and Ms. Guo Zhiping were arrested on March 4, 2020. They have been held in a detention center for over seven months. Their cases were brought to the Gaoyang Court. They will be tried at 9:00 a.m. on November 6.

Gao and three other officers from the Liaoyang County Domestic Security Division broke into Ms. Chen Suling’s home in Yaolao Village and ransacked the place on the morning of October 26, 2020. They confiscated a printer. Ms. Chen, nearly 70, was arrested.

The officers also harassed Ms. Sun’s family members. They threatened that if they did not sign the three statements, Ms. Sun’s subsistence allowance would be stopped, and her son’s employment would be adversely impacted.

Ms. Yao Yuyan and four other practitioners were arrested on Heishui Road by officers from the Nanguangchang Police Station, Kuancheng District, on August 6, 2020.

Ms. Yao escaped from the police station on the morning of August 8. The other four practitioners were released on bail in late September. The police are still looking for Ms. Yao, and a warrant has been issued and posted online for her arrest. Ms. Yao’s husband Mr. Song Liang was also arrested in this incident, and he has been officially placed under arrest.

Meng Kunyin (gender unknown) and other practitioners were arrested on the afternoon of October 26, 2020. Ms. Meng Niang’s home was ransacked, and several computers, several printers, several boxes of desk calendars, printing paper, and supplies were confiscated.

Mr. Wu is retired from the Bajiazi Forestry Bureau. It was reported that his retirement salary has been suspended since August 2020.

Li, a member of the Jincheng Community staff, in Acheng District, called Mr. Huang Tiebo’s mother on August 20, 2020, and asked her if her son was still practicing Falun Gong. Li said that Mr. Huang had to sign “transformation” statements. Mr. Huang’s mother refused to comply.

Ms. Li Xiulan, 79, was sentenced to six years in prison for distributing Falun Gong materials in 2005. She was held in the Shijiazhuang Women’s Prison. She received pension during that period. She also received pension after her release from prison in 2011.

In June 2020, the Longhua County Labor and Social Insurance Office called her son and asked him to tell his mother to return the pension payments she received in these years. Since August 2020, her pension has been suspended.

Ms. Zhang Baoling, Ms. Jiang Shubo, and Ms. Ci Yuanmei in Fuzhoucheng Town were arrested on September 22, 2020. They are being held in the Yaojia Detention Center.

A Falun Gong materials production site in Tongzi Residential Community, Dongxing District, was destroyed on October 26, 2020. Elderly Mr. Meng Kunlun and practitioner Qiu Ziqun (gender unknown) were arrested, and their homes were ransacked. In addition, practitioners at two other materials production sites were also arrested, and their homes ransacked.

Jiang Hui, head of the Liuhe County Domestic Security Division, called Ms. Li Junlan on October 27, 2020, and asked her to go to the division to verify a few things.

Upon her arrival, Jiang Hui and another officer dragged her to an interrogation room and asked where she worked, etc. They started asking for her personal information, but Ms. Li refused to answer. They filled out a form on the computer, and asked her to sign her name, which she refused. She returned home that day.

Ms. Zhang Sumei and two other practitioners were arrested on October 25, 2020, for talking to people about Falun Gong. Their current whereabouts are unclear.

Ms. Chen Hua in Jing’an District was monitored and followed, on October 24, 2020, by people sent by the Xinlu Sub-district 610 Office and Gonghexin Road Police Station.

Practitioner Cao (gender unknown), about 80 years old, in Chuangyecheng area, was arrested by officers from the Chengfeng Police Department for posting Falun Gong materials on October 26, 2020. Cao’s home was ransacked. Cao’s family had to pay 10,000 yuan for bail.

Ms. Guan Fengqin and Ms. Zhang Xiaohong were arrested by officers from the Lixin Police Station while talking to people about Falun Gong on the morning of October 27, 2020.

Ms. Nan Xubing was arrested by officers including Rong Ruyi from the Jiancaoping Police Station on September 18, 2020, for mailing truth-clarifying materials to Tian Wenhao, head of Jiancaoping District. Her husband Mr. Yang Wenyu was arrested with her. Ms. Nan was given 15 days of detention, to be served at home due to the epidemic.

Seven officers surrounded and intimidated Mr. Gu Jiushou in the Chongqing Cancer Hospital on the afternoon of October 27, 2020.

Mr. Zhao Lin will be tried the second time by the Qiaoxi District Court on November 2, 2020.

Zhong Ren and two other people harassed practitioners Long Shangfu (gender unknown), Feng Shouqiong (gender unknown), and their families on October 22, 2020. They threatened the families that their parents’ Falun Gong practice would adversely impact the future of younger generations in the family.

Yongyang Town Government staff members went to Ms. Liu Guiyun’s home in Zhoujiazhuang Village and harassed her. They asked her to sign paperwork and threatened that if she did not, it would adversely impact her child’s education. She firmly declined.

Mr. Zhang Zhifu and his wife Ms. Yao Fengru in Zaohua Township, Yuhong District, were released on bail on the evening of October 27, 2020. They were each fined 5,000 yuan.

Starting from September and October 2020, the public security, procuratorial, and court system in Ninghe District ordered officials and employees in various work units to deepen and extend in time, the persecution of local Falun Gong practitioners.

Mr. Zhai Xinhao and his family members were repeatedly harassed at home by government officials and sub-district personnel. They tried to coerce Ms. Zhai to sign guarantee statements renouncing Falun Gong by implicating her family members. They threatened that public offices they held, salaries, and children’s education would be adversely impacted.

“My Understanding of Cultivating With Righteous Fa-Principles”