(Minghui.org) Today's news from China includes incidents of persecution that took place in 25 cities or counties in 12provinces, where at least 40 practitioners were recently persecuted for their belief. 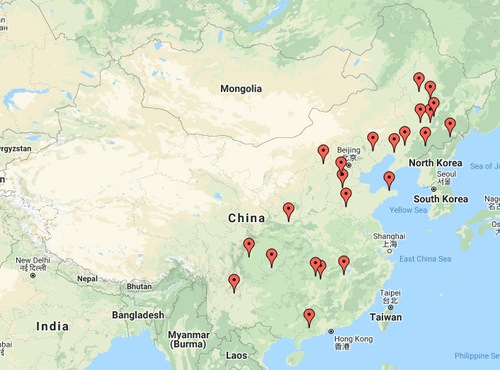 Ms. Kang Jinxiang was deceived into going to the local police station on August 25, 2020. She was arrested by officers waiting there, and was held for 17 days in the Hunyuan Brainwashing Center.

Mr. Liu Yuansheng is being held in the 12th Ward, Shenyang No. 1 Prison.

Ms. Hu Shuiying was arrested by officers from the Xihu District Domestic Security Division in July, 2019. She has been held at the Nanchang Detention Center for more than a year. She was sentenced to two years in prison.

The family of Niu Jiahui (gender unknown) received a call on the evening of October 28, 2020 telling them that Niu would be tried on the afternoon of October 29, 2020. No address was revealed, and the family was not allowed to attend the trial.

Ms. Wang Jinyun was notified by the Xian City Pension Office that the basic pension adjustment, which she received during her imprisonment from 2014 to 2018, would be deducted from her pension beginning this October.

In addition, she was told that the basic pension she received during the four years' imprisonment would be deducted as well, and starting from the coming November, imprisoned practitioners would not get any pension. The names of affected practitioners will be provided by the procuratorate.

Mr. Wu [given name not known], a retiree from the Bajiazi Forestry Bureau, has had his pension stopped since August 2020.

Ms. Ye Jinhua, in her 70s, was taken to a community office by security personnel for handing out Falun Gong calendars on the morning of October 2, 2020. Officers from the Fengshan Police Station were called in. Ms. Ye was arrested and taken to the police station. The officers searched her and found several calendars. They then ransacked her home and seized several Falun Gong flyers. The police station issued a residential surveillance notification, citing the fact that she has been imprisoned before. Ms. Ye was released in the afternoon.

Mr. Lin Decai was harassed at work by officer Lu Bo and others from the Xiejiawan Police Station on the morning of October 22, 2020. The officers videotaped the incident. The officers harassed Mr. Lin’s wife, Ms. Zhang Quancui, at home under the pretext of checking permanent residence records on August 31, 2020.

The next day, October 23, 2020, officer Lin Yao and others from the Lijiatuo Police Station went to Mr. Lin’s home. They claimed that they were verifying residents in the house, videotaped the incident, and said that the police station would send people to talk to him again.

Huang Jinyu (gender unknown) was arrested on October 27, 2020 for talking to people about the persecution of Falun Gong.

Wang Zhifei (gender unknown) is being held in a brainwashing center in Jilin City.

Ms. Lin Chenglan was arrested at her shop by a half dozen officers from the Domestic Security Division on October 21, 2020. The officers questioned her about if she had posted Falun Gong printouts in a street, took her to her home, and ransacked the place. Her Falun Gong books were confiscated. She was taken to the Fenghuangshan Police Station for interrogation. The officers threatened to detain her for 10 days. She managed to return home at 5 p.m.

Ms. Daluan of Hujia Village was called to the Village Committee by the village Communist Party secretary. They tried to force her sign the “three statements.” Ms. Daluan replied that she could not write. They then had her press her fingerprints on the document.

Ms. Liu Erpeng of Zhaotun Village was called to the brigade office by her daughter-in-law, who was acting under the command of the village head. Seven or eight people from the Comprehensive Management Office, including Geng Guoqiang, were there. Her daughter-in-law had her sign the “three statements.”

Dai Xiuying (gender unknown) of Dawang Village was ordered to sign the “three statements” by the village Communist Party secretary. She refused.

Ms. Tan Fang and Ms. Luo Jiping were arrested in a copy shop by officer Wen Daming from the Domestic Security Division and officers from the Chengnan Police Station on the morning of October 28, 2020 when Ms. Tan was copying a defense statement written by a lawyer for her son, Mr. Luo Longfei. The officers seized the statement and attachments, and threatened the shop owner with closing the shop. Ms. Tan and Ms. Luo were taken to the police station for interrogation. They were released in the afternoon.

Ms. Li Cuiling was visited by a male agent from her community. The agent asked if she would attend a “learning session.” He actually meant a brainwashing session. Ms. Li told him no. He called in the afternoon and said that she had to attend the next day. Ms. Li and her parents have since fled their home.

Ms. Zhao Shuyun was arrested by officers from the Jishu Police Station on the morning of October 27, 2020. The officers claimed that they arrested her because when they arrested her the last time, on July 15, she had a high fever and the Jilin City Detention Center would not take her.

Ms. Wang Lirong was harassed at home by an officer from the Dongguan Police Station on the morning of October 28, 2020. The officer ordered her to sign the “three statements,” asked for her cell phone number, and took out his cell phone to take a picture of her. Ms. Wang refused to cooperate with the invasion of privacy.

Ms. Shi Ling, in her 40s, and her family were harassed multiple times by Longxing Town Police Station director Zhu Shiwen and others. The officers ordered her to sign some document and threatened her children’s future. Ms. Shi and her family were stressed by the incident.

Ms. Xu Xuemei works at the Northeast Petroleum University. An agent from the Political and Legal Affairs Committee called her on the morning of October 29, 2020, demanding that she cooperate with her community agents and sign the “three statements.” They threatened that if she did not give up practicing Falun Gong, they would notify the police department for the next action, talk to her work unit leaders, etc.

Ms. Liu Qiaozhen was arrested at home by officers from the Jiacun Town Police Station around 10 a.m. on October 25, 2020. The officers came in two cars, and blocked both doors of Ms. Liu’s home. Police station director Zheng Jianlong first called Ms. Liu’s husband and told him that she would be subjected to 11 days of administrative detention. They called later and said that they would collect evidence.

Officers went to Ms. Sun Jingsu’s home on October 28, 2020. Ms. Sun was not at home. Village cadres later said that it was to make her state that she would stop practicing Falun Dafa and sign some papers.

Ms. Shen Xuemei was arrested on September 30, 2019 and imprisoned at the Luoding Detention Center. She was transferred to the Yunfu City Detention Center in October 2020.

Mr. Zhang Chunqiu was sentenced to three years and seven months in prison by the Loudi Court on June 11, 2020. Mr. Zhang appealed to the Loudi Intermediate Court.

The home of Ms. Li Dailian, 75, was searched by officers from the Wangcheng District Police Department on the morning of October 28, 2020. Her Falun Gong books, radio players, and other items of personal property were confiscated. It is unknown if she was arrested.

Four practitioners from Kuaida Town, Tang Lili, and practitioners surnamed Gao, Sun, and Jin, were harassed by officers and local community agents. They were ordered to sign a guarantee statement, which they all refused to do.

Ms. Pei Shumei and husband Mr. Zhang Wenfu were arrested at home by officer Sun Runxian and others from the Erdao District Domestic Security Division at noon on October 28, 2020. The officers ransacked their home. They did not show any documents as required by law during the whole process. Ms. Pei and Mr. Zhang were taken to a detention center. It was said they would be detained.

Ms. Qiao Yinglan, 70, was arrested by three or four officers from the Xiyao Police Station on the morning of March 13, 2020 after a security guard reported her for distributing Falun Gong flyers. She was taken to the police station and fined 1,000 yuan. The officers ransacked her home, and confiscated her Falun Gong books, a picture of Falun Gong's founder, and a computer.

Ms. Jin Shuxian, 66, was arrested by half a dozen plainclothes officers on June 17, 2020 when she was talking to people about the persecution of Falun Gong in Beilu Open Market. She was taken to the Beilu Police Station and fined 1,000 yuan. Police ransacked her home and confiscated her Falun Gong books.

Ms. Cao Ping was harassed at home by community agents in September 2020. They ordered her to sign a prepared document and threatened that she would be taken to the Fushun Brainwashing Center next year if she did not comply. Ms. Cao refused to sign. They then tried to call Ms. Cao’s child, but were stopped by Ms. Cao.

In September 2002, officers from the Xingyou Police Station and agents from Xingyou Community came to Ms. Yu Xiujun’s home. Ms. Yu was not at home. They harassed her husband and threatened him.

Prior to her latest term, Ms. Qiang has been repeatedly arrested for practicing Falun Gong and was twice sent to forced labor camps over the past two decades of persecution. She was subjected to brutal tortures aimed to force her to renounce her faith.

Mr. Wang Zicheng was arrested on June 8, 2020 for distributing Falun Gong materials. The authorities never informed his family of his case status until he was indicted on October 23, 2020. He is now scheduled to appear in the Pinggu District Court on November 11, 2020. His family has hired a lawyer to represent him.

Prior to his latest arrest, Mr. Wang has been imprisoned three times for a total of 14 years for practicing Falun Gong.