U.S. Secretary of State: “Tear Down the Firewall” and “Enable the People of China” to Make a Different Decision

(Minghui.org) On November 10, 2020, the U.S. Secretary of State Michael Pompeo delivered a speech at the Ronald Reagan Institute, titled “The Promise of America.” In his speech, he confirmed that the most immediate threat that the U.S. and the whole world faces now is the tyranny of the Chinese Communist Party (CCP).

While facing down the CCP’s authoritarianism with enhanced diplomatic efforts and military strength around the globe, the current U.S. administration is also working hard to tear down the firewall in China and enable the Chinese people to have access to free information that would allow them to make a different decision about the future of China. 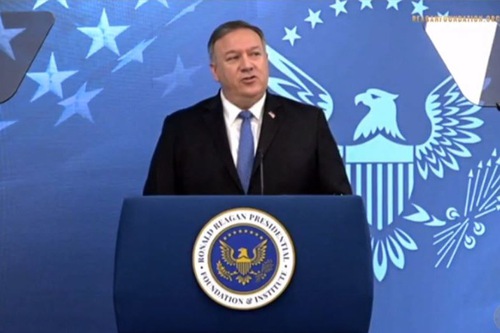 Secretary Pompeo compared how the Reagan presidency facilitated the collapse of the Soviet empire to the similar challenge the current administration is facing with the pressing CCP threat.

He said that President Reagan “understood that no other nation, under God, was conceived in liberty quite like the one that we are. His deep, innate understanding of America as an exceptional place in the world gave him the strength to face down the Soviet scourge.” In the Trump administration, on the other hand, they are “equally confident that America will overcome any challenge.”

Through a series of achievements in destroying the ISIS caliphate, sanctioning Iran, enhancing the relationship with their Gulf partners and restoring peace in the Middle East, “those pillars of strength and candor are also the foundation for America’s policy towards the world’s number-one threat to freedom today: the Chinese Communist Party.” said Pompeo.

“We showed what it is. It is authoritarian; it is brutish and is antithetical to human dignity and freedom.”

He emphasized that the U.S. will stop turning a blind eye to the CCP’s aggressive attempts to advance their dictator agenda on the worldly stage, including illegal claims in the South China Sea, coercion and co-optation of American businesses, disguising consulates as dens of spies, stealing of intellectual property, as well as the human rights atrocities in Xinjiang, Tibet, and elsewhere.

“This challenge requires not only diplomatic effort but military strength to keep the peace. So this administration has made historic investments to enhance our armed forces and to focus their efforts and bolster our primacy in the region.”

Since taking office as the U.S. Secretary of State in April 2018, Pompeo has traveled around the world to strengthen the U.S.’s relationship with their global allies.

“I’ve told them that the West is winning. I’ve reminded them that we will prevail. The good news is that the free world and sovereign nations are beginning to wake up. They are now rallying to this cause. I’ll often hear, we don’t want to pick between the United States and China. I remind them that that’s not the fight. The fight is between authoritarianism, barbarism on one side and freedom on the other. And so we’ve begun to strengthen the institutions that can achieve this objective. From the Quad, to ASEAN, to NATO, we’ve woken them up to the threat posed by this Marxist-Leninist monster.”

He said that most administrations around the world have realized the urgency of the matter and that “the Trump administration has succeeded in making this important shift for American national security and indeed for the freedoms of all humanity.”

“And so we put together all the apparatus, all the institutions. At the State Department, we have fundamentally re-shifted how we think about the world. My ambassadors, no matter where they are in the world, have China at the top of their list. So if you’re an ambassador in the Democratic Republic of Congo or in South Korea or in Oman, you know that the Chinese Communist Party’s intent on impacting that country, and we are determined to make sure that we use our capacity to push back against that challenge.”

“In the end, the people of China will ultimately be determinative just as the people of the Soviet Union were ultimately determinative of the course of history inside of that country. And so it’s our fundamental effort to work to make sure that the Chinese people have access to information, data, all the things that they will need to see so that they, too, can share in these very freedoms that we all care so much about.”

Pompeo added that the “innate desire for freedom, for personal autonomy, for human dignity” is something that “rests in the souls of each of us.”