(Minghui.org) Today's news from China includes incidents of persecution that took place in 15 cities or counties in 6 provinces, where at least 27 practitioners were recently persecuted for their belief. 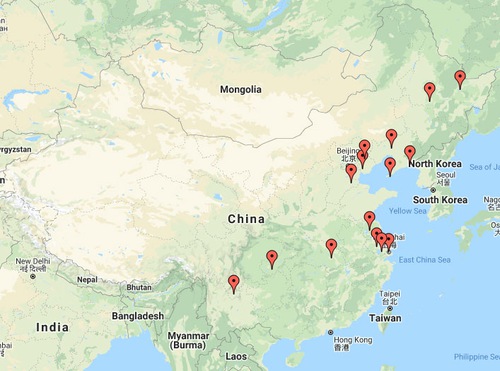 Ms. Fu Lihua was arrested at home by officers from Xigang District Police Station on July 10, 2020. She is being held at the Yaojia Detention Center for refusing to sign her name. The police submitted her case to the Xigang District Procuratorate.

Ms. Zhang Yuhua and her non-practitioner husband were arrested by officers from the Chengxi Police Station on October 6, 2020, after the officers flagged down their car. Her husband was released the same day. Ms. Zhang was detained for ten days.

Ji Guixiang (gender unknown) and Huang (gender unknown) were arrested by officers from the Wangsi Town Police Station on September 29, 2020 for distributing Falun Gong flyers. They were first taken to the Nanpi County Domestic Security Division, then sent to the Cangzhou City Detention Center.

Mr. Zhao Haisong, his wife, and his family members received harassing calls from Li Quanrui, the village Communist Party secretary, and Zhao Yazhi, the Women’s Federation director in late September, 2020. The callers requested them to sign their names. When they refused, Mr. Zhao received two harassing calls from officers at the Tenth Farm Police Station.

Ms. Zhang Yindi was harassed at home by officers from the Gulu Police Station on October 14, 2020. When the officers ransacked her home her heart rate accelerated. She was trembling and could not move. The officers dragged her to the police station, took a blood sample, finger prints, and handwriting.

Ms. Gu Baozhen was harassed at home by police on the morning of October 14, 2020. The officers took her to a police station where they collected her blood sample, finger prints, and handwriting. Ms. Gu refused to go. They threatened her with handcuffs.

Ms. Zhang Xia was arrested by officers from the Yujiatou Police Station in August, 2020 for talking to people about the persecution of Falun Gong. She was detained for 15 days.

Ms. Li Xianglian and Ms. Qin Xia were arrested by officers from the Anqing Police Station on October 11, 2020. They were taken to the Jiamusi Detention Center. The center refused to take them because they failed the physical exam. Claiming they would release them on bail, the police extorted 10,000 yuan from each of them. They were released to their families after 5:00 p.m. on October 12.

Ms. Hu Qinglan was arrested at home on October 15, 2020. Village officials, agents from the Beizhen City Political and Legal Affairs Committee (also known as the 610 Office), and officers in two police cars came to her home, ransacked the place, and confiscated a full set of Falun Gong books, Falun Gong couplets, and pendants. They took Ms. Hu to the Daqing Township Police Station. They photographed her and demanded that she write a guarantee statement. They said it was a condition for her release. Ms. Hu was released at 4:00 p.m.

Ms. Yang Jie was detained on March 13, 2020. She was formally arrested on April 17, and charged on July 13. She will be tried in the Sixth Court, Fengxian District Court on the afternoon of October 23, 2020.

Mr. Lin Maocheng was arrested at work by several officers from the Dagushan Police Station on July 22, 2020. The officers brought him to his home, ransacked the place, confiscated his Falun Gong books, a computer, a printer, his identity card, his driver’s license, and other belongings. Mr. Lin was taken to the police station, where police took his photo, fingerprints, voice samples, and blood samples. They tried to force him to sign an interrogation record, but he refused. He was released after midnight. Mr. Lin recently got a call from the Jinzhou Procuratorate. The caller demanded that he report to the Procuratorate and sign his name.

Ms. Yao Weimin was arrested by officers from the Shishan Police Station on the evening of August 20, 2020. Her home was ransacked. She was released on bail on August 21. Her case is in the Wujiang Procuratorate.

Ms. Guo Cuilian and Mr. Jin Wengui were harassed at home by Ma Fei and Li Zhiwei from the Kuancheng County Domestic Security Division, officers from the Tangdaohe Police Station, the Dashizhuzi Township Political and Legal Affairs secretary Wang Shuai on October 9, 2020. The same day, those people also harassed Ms. Kong Lingjuan. Ms. Kong is a doctor. They ransacked her office and home.

Mr. Zhang Xianjun and Ms. Xu Yan were arrested by officers from the Dongfeng Police Station on October 19, 2020. Details are unknown.

Ms. Jiang Deyuan’s home was ransacked after she delivered her and her husband’s personal experience about the persecution to community office and the Chengnan Police Station on October 12, 2020. Agents from the community office and officers from the police station confiscated her Falun Gong books and took her to a hospital for a physical exam with the intention of imprisonment. They released her after learning that her blood pressure was too high to be detained.

The Domestic Security Division submitted Mr. Lei’s case to the Qingjiangpu District Procuratorate around August 10. The Procuratorate was about to file charges to court on October 13, and demanded that Mr. Lei admit guilt and write a “guarantee statement” promising not to practice Falun Gong. Mr. Lei refused. On October 15, a prosecutor said that they would file charges soon since he did not admit his guilt.

Mr. Lei was imprisoned before. He was sentenced to seven years in prison by the Jinzhou City Court on July 27, 2004.

“47 Falun Gong Practitioners Sentenced for Their Faith in October 2020”