(Minghui.org) Falun Gong practitioners in Hong Kong held activities on October 1, 2020, outside the Hong Kong Liaison Office to support the 360 million Chinese people who have withdrawn from the Chinese Communist Party (CCP) and its affiliated organizations. 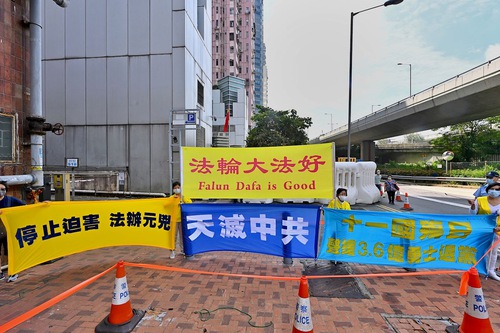 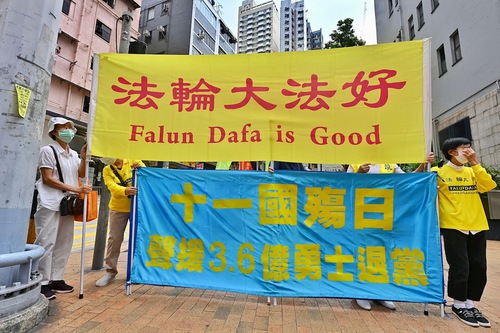 Falun Gong practitioners hold a peaceful protest outside the Hong Kong Liaison Office on October 1, 2020, to call for an end to the ongoing persecution.

Disintegrate the CCP, End the Tyranny

This year on October 1, the CCP's national day, the CCP and Hong Kong's government mobilized more than 6,000 police officers to stop protests. The Liaison Office, which represents the CCP in Hong Kong, had a heavy police presence outside.

Complying with the four-person limit on public gatherings, Falun Gong practitioners walked from the Western Police Station to the Liaison Office in groups of four. Outside the Liaison Office, they held banners that read “Falun Dafa is wonderful” and “Support the 360 million people who have quit the CCP.” 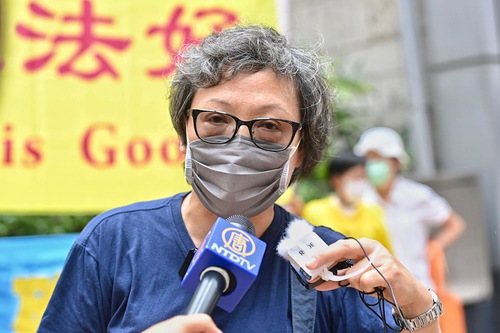 Liu Huiqing, spokesperson for the Hong Kong Falun Dafa Association, calls on governments around the world and the public to stop the Chinese regime’s brutal persecution of Falun Gong practitioners.

Liu Huiqing, spokesperson for the Hong Kong Falun Dafa Association, read a statement near the main entrance to the Liaison Office. She called for the disintegration of the CCP and the end of its tyrannical rule.

In her statement, she said that over the past year, amidst protests against the extradition law, the CCP has been inciting hatred and violence in Hong Kong.

She also said the CCP regime imposed the national security law on Hong Kong, destroying the promise of “one country, two systems.”

She pointed out that England’s Oxford University recently allowed students who were specializing in China studies to hand in their theses anonymously to protect against the possibility of retribution under the national security law.

Falun Gong practitioners have resisted the persecution using peaceful means for many years, and have also helped many Chinese nationals quit the CCP and its affiliated organizations to distance themselves from the regime. The United States recently decided to enforce bans on CCP members immigrating to the country, and this has further hastened the trend of quitting the CCP.

Falun Gong Practitioners Will Resist Till the End

Ms. Zhou, a Falun Gong practitioner, said that she will continue to go to the Liaison Office to protest for as long as the persecution continues. “For 21 years, the CCP has been ruthlessly torturing practitioners. A great deal of evidence shows that they have taken practitioners’ organs by force and sell them for huge profits,” she said. 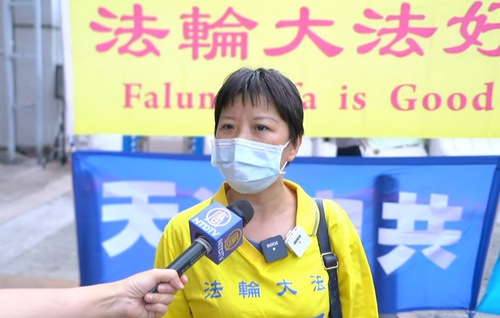 “Many people became fit and healthy by practicing Falun Gong. They improved their moral character. The former CCP head, Jiang Zemin, was jealous that the number of practitioners exceeded the number of party members and initiated the persecution,” she said.

Ms. Zhou said she is not afraid of participating in the protests after the enactment of the national security law. “We live by the principles of Truthfulness, Compassion, Forbearance. Our belief can only benefit society,” she said.

She also called on those who have joined the CCP to quickly renounce their memberships.

Mr. Cen is a member of a democratic organization, the Hong Kong Alliance in Support of Patriotic Democratic Movements of China. He came to join the protests against the CCP that day. He expressed admiration for the practitioners’ unwavering spirit in the face of so many years of persecution.

He said that the 360 million withdrawals from the CCP was a growing trend. “History has demonstrated that there is no political power that can last forever. Totalitarian rule that oppresses its people will not go far.” He called on Chinese nationals to see through the CCP’s tyranny and step forward for the sake of future generations.

Although police officers were deployed everywhere across the island that day, checking people and stopping protests, Mr. Cen said that he will still continue to come out. “I must do something for the sake of future generations,” he said.