(Minghui.org) Today's news from China includes incidents of persecution that took place in 19 cities or counties in 9 provinces, where at least 35 practitioners were recently persecuted for their belief. 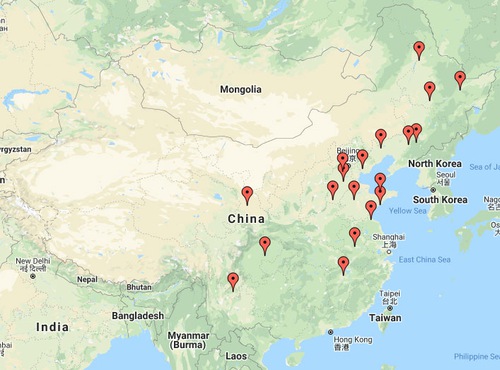 Ms. Sun Yanhuan’s case was brought to court on the afternoon of September 4, 2020. She was told to go to the Xiangyang District Procuratorate.

Ms. Sun, accompanied by her brother, arrived at the Xiangyang District Procuratorate at 8:45 a.m. in Department 7. The case handler told her to go to the court.

After arriving at the court, Song Tao, the judge in charge of her case, told her to go to the police station to finish the paperwork for residence surveillance.

On November 8, 2016, Ms. Sun was deceived into going to the Dongfeng Police Department for an “interview.” She was arrested by officers from the Jianguolu Police Station.

In mid-May 2017, she started feeling physical discomfort, with a burning pain in her chest, and she had a low fever every day.

She was tried twice, in September and October 2017, and was later sentenced to three years in prison. As her physical condition deteriorated, the detention center and the court jointly decided on a term with probation.

Mr. Cao Shenming, about 80, and Ms. Chen Yulan, in her 70s, were harassed by Changfeng Residential Community personnel in July and August 2020.

Ms. Wang Lin, teacher at Lanzhou Jiaotong University, was reported by a student for talking to students about Falun Gong. She was arrested around August 23, 2020. Her current whereabouts are unknown.

Mr. Si Feng, 67, from Lijiatuan Village, Cheng’an County, was reported to the police by someone that Mr. Si talked to about quitting the Chinese Communist Party and its affiliated organizations on June 17, 2020.

Three officers led by Zhang Yuchuan, director of the Lijiatuan Town Police Station, went to Mr. Si’s home and searched it. They confiscated a Chinese New Year painting with Falun Gong information on it, a page of printed materials, and some stickers.

On August 20, 2020, Mr. Si’s grandson, who attends a junior college, underwent a political review when he applied to join the People’s Liberation Army. The police department gave him a hard time because his grandfather practices Falun Gong. They extorted 5,000 yuan from Mr. Si’s family, 3,000 yuan of which was taken by the police department and 2,000 yuan by the Domestic Security Division. The officers ransacked Mr. Si’s home again, but did not find what they were looking for. They forced his family to pressure him to write a guarantee statement.

Ms. Liu Xiulan from Acheng District was harassed by Li Guojun when she was about to go out on the morning of August 7, 2020. Li told her to go to the residential community office, but she refused.

Two people came to her home and told her to sign some paperwork on the afternoon of August 10. She did not sign.

Three officers from the Shengli Police Station, Binzhou Town, Bin County, went to Ms. Liu Zhixian’s work unit and harassed her on August 18, 2020. They asked Ms. Liu if she still practiced Falun Gong, went out to distribute Falun Gong materials, or had any Falun Gong informational materials at home.

They demanded that she stop practicing Falun Gong and going out to distribute Falun Gong materials, threatening that she would lose her job and her child’s future would be adversely impacted.

Mr. Wang Fuguo was arrested at home by officers from the Yanbian Police Department, Panzhihua City, on the morning of September 9, 2020. Further details are pending.

Ms. He Xiaoyan has remained under surveillance even after she was extorted for 20,000 yuan by the Suning County Police Department.

Mr. Guo Zhenjia was released on bail for one year.

On February 10, 2020, over 10 people including Liu Zhaowei, a residential police officer from Qixingpa Farm in Jiusan Branch Company, deceived Mr. Zhu Xiaoqing to open the door by pretending to be a community agent. They forced their way into his home and ransacked it.

The police confiscated all items related to Falun Gong. Mr. Zhu was held in the basement of the Jiusan Police Department. Liu, deputy director of the police station and officers from the police department interrogated him. He was placed under residential surveillance for six months. His family brought him home that afternoon.

Ms. Wang Suqin, 70, from the Haizhou District, was reported to the police for distributing Falun Gong materials on August 8, 2020. She was arrested and taken to the Yuntai District Detention Center by officers from the Hongmen Police Station. Her case was turned over to the Procuratorate.

Ms. Jiang Cuilian was arrested at home by two officers from the Beita Police Department on September 6, 2020. She was taken to the Chaoyang City Detention Center.

Mr. Luo Wenbin was arrested when he distributed Falun Gong materials in the Tacheng area, Liantang Town around September 1, 2020. He is being held in the Nanchang County Detention Center.

Ms. Jiang Lianhua was arrested about two weeks ago in the Wuyang area, Liantang Town. Her current situation is not known.

Three officers from the Zhangxing Town Police Station and Yuan Guihao, a town government staff member, went to Ms. Sun Yaoxiang’s home in Dibeitouwangjia Village and arrested her on September 1, 2020.

She was handcuffed and taken to the town police station for interrogation. The officers photographed her and tried to force her to sign and fingerprint some paperwork. She refused. Several officers grabbed her hand and pressed her fingerprints on the sheet. They then took her home and ransacked the place.

Ms. Wu Yuanying from the Lingshang Village, Jinling Town, was reported to the police when she distributed Falun Gong materials on September 2, 2020. She was followed and arrested at a vegetable market by officers from the 610 Office the following morning. She was taken to the city police department for interrogation. She was beaten by the police for not cooperating, and her face became swollen.

Ms. Wu was taken to her daughter’s home. The officers confiscated a copy of Zhuan Falun and other items.

Ms. Guo Guimin from Guanzhuang Village and Ms. Guo Lixin from Guojia Village, Jinling Town, were arrested and taken to Zhaoyuan City by plainclothes Domestic Security officers at the Zhangxing Town farmers market when they talked to people about Falun Gong on September 7, 2020. Both practitioners were taken back home that evening.

Ms. Xie Chunhua from Kaiping District was arrested by two officers when she talked to people about Falun Gong in Luogezhuang Village, Yuehe Town, Kaiping District, on September 4, 2020.

Ms. Fu Shuying and her husband Mr. Wu Hailin were arrested by officers from the Malu Police Station on September 8, 2020. The officers photographed Ms. Fu.

Ms. Wang, 60, was arrested by several officers from the Yingshan County State Security Division in recent days. The officers ransacked her home, but did not find anything to use against her.

The officers ran into another female practitioner, in her 60s, and immediately arrested her. They ransacked her home as well.

Both practitioners were taken to the Yilong Detention Center by officers from the Xiaoqiaoniu Police Station. They were detained for six days.

Ms. Wang Kezhen, 58, and another female practitioner went to visit an 84-year-old practitioner. They were arrested by officers from the Dongqi Police Station, Yaohai District. Both practitioners were detained for violating the public order.

Ms. Shi Shaolan’s home in Fengnan District was ransacked, and all her Falun Dafa books were confiscated.

The Party secretary of Hujiazhuang Township Ma Shuhai, the head of the Armed Department, the local police, and Guo Guang, Party secretary of Xiwuquan Village, went to the homes of Ms. Yan Qinghua and Mr. Li Wenqi in Xiwuquan Village, and harassed them on September 9, 2020. They photographed the practitioners and pressured them to sign some paperwork.

The Jinan Railway Police Department, and the Jinan Public Security Ministry coordinated with the Laiwu Railway Police Station to arrest several practitioners and ransack their homes on July 15, 2020.

Ms. Gu Xiuling and her husband Mr. Wei Lianpei from Zhangjiawa Town, Laiwu District, were arrested by seven plainclothes officers from the Jinan Railway Police Department. They were taken to the Zhangjiawa Town Police Station, where they were interrogated. All their Falun Dafa books were confiscated.

Three plainclothes officers went to Ms. Lu Yifen’s home. They found Ms. Lu lying in bed and saw that she could hardly take care of herself. They forced her family to sign a guarantee statement for her.

Her home was ransacked. She is being held in the Dashagou Detention Center.

Ms. Zhang Yuzhi, 65, was reported to the police when handing out keepsakes to people at one end of the Dalian Bridge on August 26, 2020. She was arrested by officers from the Dongzhou Police Station. Her home was ransacked and her Falun Dafa books were confiscated. She was taken to the Nangou Detention Center for 15 days of detention.

“Chinese Tourist: I Want to Be a Better Person Too”