(Minghui.org) Today's news from China includes incidents of persecution that took place in 22 cities or counties in 10 provinces, where at least 57 practitioners were recently persecuted for their belief. 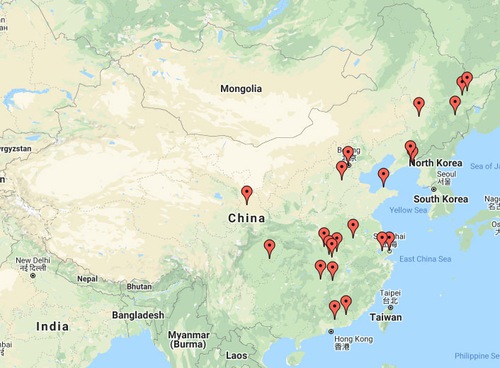 Mr. Liao Banggui, 72, is held in the No. 2 Ward of Jiazhou Prison. He was forced to engage in prison labor for not acknowledging the charges against him. He was severely beaten and verbally abused. He was tied to a torture instrument and force-fed. He was tortured physically and mentally, and passed body waste in his pants.

Ms. Li Renying is set to be tried in early September 2020.

Ms. Qiu Renying in Xingning City was arrested at work at the Hongyuan Residential Community at noon on September 8, 2020. Her sister, Ms. Qiu Yuanxiang, was also arrested that morning.

After being released from detention last year, Ms. Huang Qiaoqin, a resident of Sanlin Town in the Pudong New Area, as well as her family, have been repeatedly harassed and threatened by neighborhood committee personnel and the local police.

Ms. Huang’s family was asked for photos of her in early August 2020. In mid-August, the neighborhood committee and the police station sent several groups of people to her home to verify in person whether Ms. Huang really had physical problems.

Ms. Chen Honglan in Lishu Sub-district, Shuangqiao Town, Shou County, was arrested by officers from the Shou County Police Department and the Shuangqiao Police Station on May 17, 2020. Her computer and printer were confiscated. She is being held in the Huainan City Detention Center.

After Ms. Chen was arrested, her family was not allowed to see her. In July, the detention center demanded 2,000 yuan from her family, saying that it was for her to see a doctor. Her actual situation is unknown.

Officers from the Lixin Police Station knocked on Ms. Feng Xiaocui’s door after 8 p.m. on September 7, 2020. When she refused to open it, the officers pried it open, forced their way in, ransacked the place, and arrested her. The officers confiscated a laptop and Falun Dafa books.

Four officers went to Ms. Feng’s sister Ms. Feng Xiaohua’s home to harass her on the morning of September 8. No one was at home. They stayed around near her home and watched the residence. When Ms. Feng Xiaohua’s husband came home from work, the officers followed him and broke in. They searched the home but did not find anything they were looking for.

Ms. Qu Lihua’s family member received a phone call from Ji Qingshan, an officer from the Hailin Farm Police Department, on the morning of September 8, 2020. Ji told the family member to guarantee that she would not practice Falun Gong.

Ms. Jin Changlin’s case was brought to the Wujiang Court in August 2020. She will be tried on the afternoon of September 24.

Seven or eight officers from the Cunliji Town Police Station broke into Ms. Zhao Ji’e’s home in Nandazhaojia Village and ransacked the place on the morning of July 9, 2020. They confiscated Falun Dafa books, Minghui Weekly, printed materials, DVDs, and MP3 players. When Ms. Zhao tried to stop them the officers took her to the police station.

After the police checked the confiscated items online, they drove her home.

Mr. Qiu Chengyang and Mr. Wu Guangwang were reported to the police for removing exhibit boards that slandered Falun Gong in Shunhe Township at around 9 p.m. on September 5, 2020. They were arrested and taken to the Shunhe Police Station.

Ms. Bi Shuyun, 67, in Xinliujia Township, was harassed at home by the Nong’an County police on July 15 and August 10, 2020. They forced her to sign paperwork renouncing Falun Gong, but she firmly refused.

Ms. Liang Shuyun, 58, was taken to forced labor camps twice, where she was tortured. Labor camp guards shocked her lips with electric batons. The police tried to force her to sign paperwork on July 15, 2020, which she firmly refused. The police threatened to confiscate her land. On August 10, the same group of people came to her home again to harass her.

Ms. Liu Jinxia, in her 50s, was harassed at home by the county police. She was determined not to cooperate.

Retired teacher Ms. Zhu Bingzhen, 68, was deceived into going to the county police department, where she was forced to sign the three statements renouncing Falun Gong.

Mr. Yue Guoming, 65, was threatened by Kai’an Township Government Staff members. He was pressured to sign paperwork and was told that if he did not sign, he would be taken to a brainwashing center. Six days later, he was deceived into going to the police department to sign paperwork.

Mr. Xu Zhangqing, his wife Ms. Tu Ailian, and his son Mr. Xu Gaorui were arrested on September 26, 2019. Their home was ransacked. They have been held in a detention center.

Ms. Zhao Fenglan, 66, was arrested by officers who were staked out nearby when she distributed Falun Gong materials in her residential community on May 22, 2020. Her home was ransacked. She was taken to the Changping Detention Center. As of June 10, 2020, her family had not sent her any daily necessities or money.

Ms. Zhao Shubo from No. 291 Farm in Suiling County was arrested in August 2020. She is being held in custody and has been denied family visits. Her current situation is not clear.

The director of the Sangyuan Township Police Station and other officers went to Ms. Gai Sheng’s home and pressured her to sign paperwork on the morning of August 30, 2020. They also called her husband and pressured him to persuade her to sign.

Over 10 people from the Li County Domestic Security Division and the Baichi Town Police Station went to Ms. Liang Yapeng’s home in Baichi Village on the morning of September 4, 2020. They ransacked her home and confiscated Falun Dafa books, printed materials, a photo of the founder of Falun Gong, and two cell phones. Ms. Liang was not at home. When these people left, they said they would return at 10 p.m.

Two female staff members, in their 50s, from Badao Residential Community went to Mr. Diao Youyi’s home one afternoon at the end of August 2020. They told him to sign guarantee statements, which he refused.

Guo Qing was phoned by a woman from the Xinfeng Residential Community on August 19, 2020. Guo was asked to sign the three statements but refused.

Ms. Huang Yizhi, about 73, was arrested and taken to the Jinzhou Police Station on the morning of September 7, 2020. She was transferred to the Ningxiang City Police Department the next day. Her younger brother went to the police station and the police department. He brought her some clothes and asked to see her, but the police refused.

Zhao Kai, a residential police officer from the Ganjiakou Police Station in Haidian District, and other people went to Mr. Jiang Jingyong’s home on September 3, 2020. They told Mr. Jiang and his wife Ms. Yang Bo to go to a Sujiatuo “transformation” class on the afternoon of September 7. Officers threatened the couple and said that if they did not go, the authorities would go to get them.

The couple were arrested and taken to the “Legal Education and Training Base” of the Political and Legal Affairs Committee of Haidian District. The training base was a brainwashing class to “transform” practitioners and force them to renounce their faith.

The State Security and the Beijing City Domestic Security Division arrested 12 practitioners on July 19, 2020. One of them, Mr. Liu Qiang (who is young) was officially placed under arrest and held in the Dongcheng Detention Center.

Mr. Feng Jiwu from the Hanyang District was beaten in the Fanjiatai Prison. As a result of the beatings, he lost vision in his right eye and hearing in his right ear.

In addition, the household registration social worker in Qili Residential Community went to Ms. Feng’s home every day and forced Ms. Gao Baoli to sign a form as part of the zero-out campaign (a concerted drive to force each practitioner on the government's blacklists to renounce Falun Gong).

Zheng Guicheng, head of Toutai Village, and other people went to Ms. Wang Shuqing’s home on the morning of September 8, 2020. They attempted to photograph her and told her to sign paperwork. She refused.

Ms. Liu Guilan, 78, is a family member of the Lanzhou Civil Aviation Company. Three officers from the Jiayuguanlu Police Station, Chengguan District, broke into Ms. Liu’s home and ransacked the place on September 4, 2019. They confiscated Falun Dafa books and Minghui Weekly. Ms. Liu was taken to the Minhang Police Station and held there for two hours. The officers called her daughter to the police station and told her to tell Ms. Liu to sign and press her fingerprints on what they wrote.

Three officers from the police station broke into her home again the following day. They told Ms. Liu to sign the paperwork, but she refused. The officers forced her family member to sign before leaving.

Jiayuguan Residential Community personnel went to Ms. Liu’s home every month to harass her since April 2020.

Some people led by the Party Secretary of the Jiayuguan Sub-district went to Ms. Liu’s home on August 9, 2020. They threatened that her name had been put on a list at the Ministry of Public Security and that she could not take planes or trains.

The Party Secretary again brought people to Ms. Liu’s home to harass her in mid-August.

Ms. Cui Chengxiang, an employee of the Greening Institute of Anning District, was arrested at home by people from the High-Tech Development Zone Police Station, the Anning District Domestic Security Division, Kongjiaya Sub-district Committee, and the Kongjiaya Residential Community on the morning of September 3, 2020. Her home was ransacked.

Ms. Cui was held inside the metal fence of the police station for two days. She was not allowed to rest or sleep. She was then taken to the Jiuzhou No. 1 Detention Center.