(Minghui.org) A pro-Chinese Communist Party (CCP) woman damaged a banner that was being displayed by Falun Dafa practitioners in Hong Kong on September 16, 2020. The police took her away. 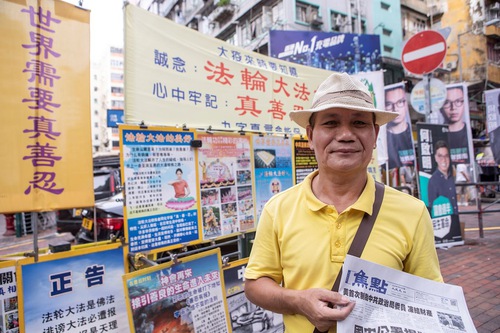 Falun Dafa practitioner Mr. Hong said that he saw a woman taking photos when the event began on September 16. Soon after that, he heard the sound of cloth being torn and noticed a hand with a knife cutting through a banner. When he walked behind the banner, he saw a woman placing a knife into her right pants’ pocket.

When she saw Hong, the woman ran to the subway. Hong rushed ahead and held her hand. The woman shouted, “Let go of me or I will file a complaint against you!”

Hong released her hand but blocked her from leaving. Several bystanders hurried over to help Hong by surrounding the woman.

“There are laws in Hong Kong, including freedom of speech and human rights,” Hong told the woman. “If you don’t like what I do, you can walk away but you cannot damage my banner.”

Many bystanders agreed to not let her go. One man said that the woman had a knife in her right pocket, which was evidence. Several people said to make sure she did not discard it.

The woman then made a phone call, telling the person who answered that she was surrounded by several people and could not leave. Hong guessed that she was a member of the CCP-organized Youth Care Association and was reporting to her supervisor.

Hong and another practitioner phoned the police twice. Police officers came and took the woman away.

Pro-CCP perpetrators have recently damaged practitioners’ banners at several truth clarification sites throughout Hong Kong. Someone dumped ink on the banners at one location. Practitioners now cover the banners with plastic sheets. The banners at another site were torn down.

“Two Women Beaten for Raising Awareness about Their Faith, One Remains in Brainwashing Center”