(Minghui.org) Today's news from China includes incidents of persecution that took place in 11 cities or counties in 9 provinces, where at least 29 practitioners were recently persecuted for their belief. 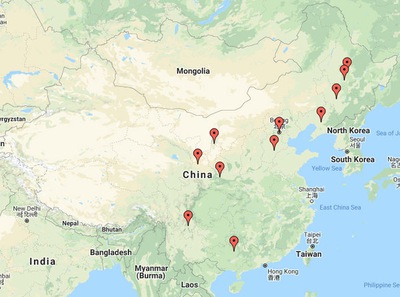 After two years of imprisonment, Ms. Wang Fang and Ms. Zhao Tingting walked out of Harbin Women’s Prison and returned home at 9 a.m. on October 2, 2020.

Ms. Wang was taken directly to the Fendou Police Station by Dayou Sub-district Administration Office personnel, Beilin District. Two officers told her not to practice Falun Gong in the future. They said practicing Falun Gong would adversely impact the future of three generations of her family. They printed out a form and told her to sign it. When she saw the charge of “Using a (slanderous term deleted) organization to undermine or sabotage law enforcement” on the form she refused to sign it.

Mr. Yang Chuanhou, who was held the Hulan Prison, also returned home on October 2, 2020. Of the seven practitioners in Beilin District who were sentenced to prison, five have returned home.

Ms. Bai Xia and Ms. Wang Fuhua’s terms were extended for 35 days as they had been released on bail pending trial for 35 days previously. Their prison term will end on November 6, 2020. They are still being held in the Harbin Women’s Prison.

Ms. Xu Shaoqiong, who was held in the Xiaomiaoxiang City Detention Center, was released on bail on September 14, 2020.

It was reported that the court notified seven practitioners' families that the court would issue sentencing on their cases after China's National Day.

So far, the status of the seven practitioners and some family members to be tried are as follows:

Ms. Tan Guiling in Xiangfang District was arrested on September 22, 2020. Her home was ransacked. She was detained for 15 days.

Since September 2020, Ms. Yu Qingxian was harassed constantly at home by Liu, director of the Chengguan District Political and Legal Affairs Committee, personnel from Weiyuanlu Sub-district Committee, officers from the Weiyuanlu Police Station, and Ma and Sun from Landa Residential Community. She was pressured to write and sign a guarantee statement not to practice Falun Gong, and to slander it. She was threatened and told that she would be taken into custody if she did not “transform.”

This frequent harassment seriously affected her family. Her husband had a heart attack. They also threatened to make her son’s work unit dismiss him and pressure him to transform her. Out of fear, her husband did not eat meals she cooked and tried to expel her from home.

Both practitioners were called to go to the Hongqiao Residential Community office to sign paperwork on September 27, 2020.

Mr. Liang Zhongcheng in Liunan District was harassed at home by an officer and a police assistant from the Chengdong Police Station, Liujiang County, on the morning of October 6, 2020. He was told to go to the local police station to make a statement, which he refused.

Officers from the Ziyoudalu Police Station went to Ms. Zheng’s home on September 15, 2020. They took out the summons warrant and search warrant, and then began to ransack the place. They confiscated a copy of Zhuan Falun, a photo of the founder of Falun Gong, and several copies of Minghui Weekly.

Ms. Zheng was taken to the police station, where she was held for one night and one day. She was sent to the hospital twice for physical examinations. She underwent nucleic acid tests, blood tests, and urine tests. She was sent to the detention center twice, but the officials refused to accept her. She was then released.

Mr. Liu Baocai if Xiangfang District was detained for 15 days, and returned home on October 8, 2020.

People from the Hexi Sub-district Office and the Wenshahuayuan Residential Community went to Ms. Tian Pengcun’s home and harassed her about a month ago. They asked if she still practiced Falun Gong. When one person tried to videotaped her, she stopped them.

When Ms. Dong Lianmei in Lishan District went to the Bank of China to apply for survivors’ compensation, she was reported by the bank staff. She was arrested by officers from the Heping Police Station. She is being held in the Xiuyan Detention Center.