Why and How Does the Chinese Communist Party Always Stir Up Hatred?

(Minghui.org) Harmony and peace is highly cherished in traditional Chinese culture. This includes the relationship between humans and the divine, humans and earth, and interpersonal interactions.

In ancient times hatred did exist between people. Instead of strengthening it, however, people were encouraged to overcome hatred and treat others with compassion. One example was Xuanzang, a monk in the Tang Dynasty who went to India for a Buddha scripture. As the prototype of Monk Tang in Journey to the West, he also encountered many obstacles in real life when pursuing spiritual enlightenment. One time he was captured by bandits. As the robbers planned to burn him in their worship ceremony, Xuanzang had no hatred. Instead, he sincerely prayed to return in the next life cycle to save the robbers.

This tradition of being compassionate to others is long gone, disappearing after mainland China was occupied by the Chinese Communist Party (CCP), whose core culture was built on violence and lies. To disrupt tradition and instigate hatred in the general public, the regime turned peasants against landlords, students against teachers, children against parents, and the Chinese against Western countries such as the United States. This brainwashing was comprehensive, from education, news media, to entertainment and daily activities.

After generations of lies and brutality from the CCP, China has become what we see today.

When visiting the United States in January 1979, Deng Xiaoping said, “Looking back past several decades, we can see any country that gets along well with the United States is now wealthy.” This remark was a sharp contrast to the CCP’s long-term anti-America propaganda since the Korean War.

With endorsement from the Soviet Union, North Korea invaded South Korea in June 1950 to advance its communism agenda. Although Joseph Stalin ordered Mao Zedong and the CCP army to join the North Korean troops countering the American soldiers in South Korea, the general public in China did not support this idea for several reasons.

First of all, unlike other Western countries, the U.S. had no concessions in China, nor had any wars broken out between these two countries. In fact, American pilots from the Flying Tigers helped Chinese fight the invading Japanese army. In addition to launching Peking Union Medical College Hospital and Yenching University, the U.S. also sponsored top schools, colleges, and hospitals in China. To seek support from the U.S., Mao Zedong wrote in 1943, “Long live July 4! Long live democratic America!”

Secondly, many people did not understand why China should help North Korea. After all, North Korea once helped Japan during its invasion in China.

The news media in China followed the propaganda guideline closely. Between 1951 and 1954, People’s Daily ran as many as 20,000 words of propaganda on the Korean War every month. Other forms included literature, cartoons, art, and songs that intensely and comprehensively slandered the U.S. Furthermore, although the CCP nowadays essentially forbids all forms of demonstrations, back then it mobilized more than 186 million people to participate in large-scale nationwide demonstrations, on May 1, 1951 for example. If including activities prior to May 1, more than half of China’s population participated in rallies against the U.S. at the time.

Fast forward two decades. In 1972, when newspapers published the picture of Mao shaking hands with Richard Nixon, known as “head of the American Imperialism” to Chinese, many people were stunned and couldn't understand how Mao shook hands with the head of our enemy during the Korean War. They thought the picture was a hoax.

Unlike Western countries that follow principles, the CCP has no true allies, explained U.S. Administration advisor Miles Yu. Even though the U.S. helped China enter the WTO and become the second largest economic entity in the world, whenever the relationship deviates from the CCP trajectory, the CCP would launch propaganda campaigns claiming “the U.S. is the Number One enemy of China.”

It is clear that the CCP plays the “pro-America and anti-America” game depending on its needs.

Since it came to power, the CCP has launched numerous political campaigns, pitting one group of citizens against another.

About 80 million people lost their lives due to these campaigns. By launching waves of top-down campaigns, the CCP brainwashed people to become self-disciplined servants who followed the Party line, due to fear for their own safety. The CCP had successfully instilled its elements of hatred in people’s thoughts in this way, which is often manifested as violence and deceit.

Prior to 1949, landowners played a critical role for local economy and education. They hired farm laborers and paid them fairly, thus establishing a mutually beneficial relationship between laborers and landowners.

In order to grow, expand, and seize power, the CCP labeled such relationship a class struggle, depicting farm laborers as being suppressed by landowners. After it came to power in 1949, the CCP mobilized the laborers to attack the landowners and rob their lands for liberation.

In the following few years, the CCP seized the lands and distributed them among laborers. It asked people to thank the Party and to be enlisted as soldiers to solidify the success. As a result, many people joined the Korean War (1950-1953), either voluntarily or involuntarily, and became cannon fodder for communism.

This situation did not last long, however. The Farmer’s Cooperative system was adopted in 1953 and, by the time the people’s commune was implemented in 1958, all lands distributed earlier had been taken back by the CCP.

Surviving on violence and lies, the CCP cannot tolerate the independent thoughts of intellectuals. In 1956, Mao encouraged intellectuals to speak at will, and claimed the Party would humbly listen to different opinions. By 1957, however, he turned around and victimized anyone who had made remarks against the Party.

In 1966, Chen Boda, Mao’s long-time secretary and fourth most powerful person in the CCP, wrote a series of articles targeting intellectuals. By then, intellectuals had been formally attacked along with landlords and others categories as enemy of the state.

Family and filial obedience are crucial parts of traditional Chinese Culture. The CCP, however, advocates, “the Party cares about you more than your parents do,” and “We should treat enemies ruthlessly like cold winter.”

Such narratives further pushed the hatred to a new level. After Fang Zhongmou made comments in 1970 criticizing Mao and supporting another CCP leader Liu Shaoqi, her 16-year-old son, Zhang Hongbing, reported her to authorities. “Down with counter-revolutionist Fang Zhongmou! Fang should be executed!” he wrote in the letter.

As expected, Fang was executed and Zhang was publicized as a hero. It was not until 1979 when the Cultural Revolution was over and many absurd incidents were reported that Zhang realized his sin. “In this world, a mother's love is the greatest and humanity is the most important,” he wrote. 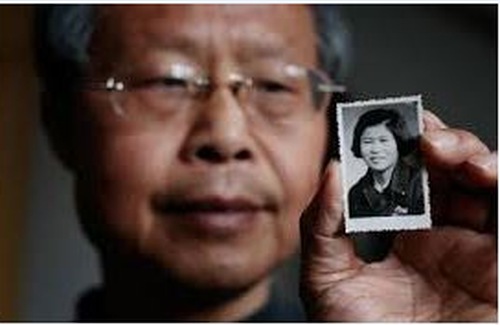 Zhang Hongbing regretted he had caused his mother’s death when he was 16.

The Cultural Revolution passed, and to ease public anger, the CCP admitted it was a mistake. But the root cause was not identified. The lies and the hatred continue.

To mobilize the soldiers to suppress the democratic movement by students in 1989, the CCP made up videos depicting students as mobsters who burnt military vehicles and soldiers. Such deceit triggered intense hatred from soldiers, who completed the Tiananmen Square Massacre as ordered.

Among all political campaigns from the CCP, one of the worst and largest is the persecution of Falun Gong, a meditation system based on the principles of Truthfulness-Compassion-Forbearance.

After suffering countless pain, physically and mentally, many people were deeply touched by the profound teachings of Falun Gong. Their regained health and renewed hope for life further convinced them that Falun Gong was the best way to help them reconnect with traditional Chinese culture and live peaceful and fulfilling lives.

Even the news media in mainland China had numerous positive reports on Falun Gong before the CCP launched the persecution of the practice in 1999. A survey in 1998 with nearly 35,000 participants concluded that 98% of the surveyed practitioners experienced health benefits. To maintain the communism ideology of hatred and lies, however, former CCP leader Jiang Zemin ordered the persecution of the practice in July 1999.

Similar to previous campaigns, the CCP made up countless lies and produced numerous propaganda materials to slander Falun Gong. Among them, the staged Tiananmen Square Self-Immolation Incident and the so-called “1400 Deaths” deceived countless Chinese people.

Cases were made up in various ways. For example, Zhang Haiqing once went to Peking Union Medical College Hospital to treat his ankylosing spondylitis. At that time, many people were waiting in line to be treated. One reporter from the state-owned Central Chinese Television showed up saying that whoever was willing to testify against Falun Gong would be prioritized with half of their medical bill covered by the government. Zhang fell into the trap and claimed that his hunchback was caused by the practice of Falun Gong.

Although this was fraudulent, and people around Zhang knew he was not a practitioner, his “story” was nonetheless widely distributed in the news media to defame Falun Gong. His wife, on the other hand, complained later that CCTV did not help cover the medical bill as promised earlier.

She Zengshan is a resident in Mengyin County, Shandong Province. His daughter had congenital heart disease and later died. People in his neighborhood all knew this. To please higher officials, Mengyin officials prepared fake materials claiming that She’s daughter was a Falun Gong practitioner and that she died after refusing to take medicine.

When officials asked Shi to testify in front of a TV camera by reading those prepared materials, he refused, since he did not want to lie. Township officials hired people to beat and torture him for three days. In the end, She yielded and followed the instructions.

These are just a few examples of the countless lies fabricated by the CCP. Propagated by a large number of news media outlets, it deceived generations of Chinese people. As the CCP’s global influence increased, they also spread globally and misled the entire world.

“Beware of Emotional Attachments Between Practitioners”