(Minghui.org) Today's news from China includes incidents of persecution that took place in 16 cities or counties in 9 provinces, where at least 31 practitioners were recently persecuted for their belief. 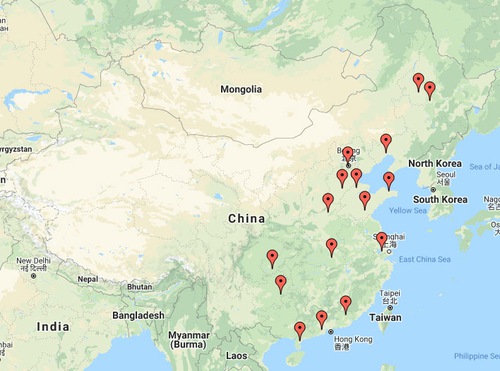 Early in September 2020, Ms. Duan Guixia, Ms. Zhang Lianyun, and Ms. Yu Binglan were taken into custody again, after they had been released on bail. Ms. Hu Yuhuan was still on bail because of a leg injury.

All seven of the above practitioners were secretly sentenced to prison, with terms ranging from two to nine years.

Ms. Luo Jiangying (over 40) was recently tried in the Chikan District Court. The proposed term from the procurator was four and a half years. The sentence was not announced in court.

Ms. Luo was arrested because she was clarifying the truth in a market on March 30, 2020. Her home was ransacked.

Ms. Sun Shujun (65) was sentenced to two years in prison by the Fengtai District Court in September 2020. She is currently detained at the Fengtai Detention Center.

Ms. Wu Xiaoming from Wuzhong District has been followed by police from the Xukou Town Police Station, either by car or electric bicycle. In the morning, they wait for her in her residential community, then they follow her to the community where her over-90-year-old mother lives. After she prepares breakfast for her mother and goes to work, they follow Ms. Wu to work. They then wait for her to get off work.

Ms. Pang Yanfen, from Zhanggezhuang Village, Dongliman Township of Raoyang County, Hengshui City, was harassed by police from the Dongliman Township Police Station and staff from the village committee on September 24, 2020. They tried to take photos of her. When she refused to be photographed, they threatened her son and other family members. Her daughter, also a practitioner, lives in another place. The police harassed her and demanded that she provide them with a photo I.D. to ensure that she stays home and doesn’t go out.

Mr. Wu Baogui is currently detained in the No. 1 Prison of Shenyuang City.

A practitioner surnamed Yang, from the Railway Family Compound, was arrested at home by an unidentified group of people around 8 a.m. on September 28. Yang’s home was ransacked. Yang’s whereabout is unknown.

Ms. Chen Shitian, from Haiqiao Town, Taishan City, received a notice from the Taishan Administration of Social Insurance Fund on September 15, 2020, that said she had to return the pension she received during her detention in jail. She then received a call on September 27 informing her that her pension would be suspended until she returned the money.

Ms. He Dangling and Ms. Lin Jing were arrested on September 22. Ms. He Dangling was diagnosed with lung cancer. A few days ago, she was told at the Plaza Road Police Station that she would be allowed to go home immediately if she signed the “three statements” promising not to practice Falun Gong, which she firmly refused.

Ms. Lin Jing is detained at the Kaili Detention Center. She may face a prison sentence because of the large quantities of truth-clarification materials (over 100 copies) found at her home.

Ms. Ren Shuhua was arrested in Zhangshanying on September 26, 2020, by officers from the Zhangshanying Police Station because she was talking to people about Falun Dafa and the persecution. Her home was ransacked. She was not detained.

Two days later, on September 28, police officers went to her home and told her she had to sign some papers for them to return the Dafa books they had confiscated. She went with them but never returned. Her family realized that they had been deceived. It is currently unknown where Ms. Ren is being detained.

Ms. Dong Chunying was called on September 2, 2020, by Wang Peng, a police officer from the Fulai Police Station in the Development Zone. She was asked to go to Haitian Residential Committee to talk. She went the residential committee office on the second floor and spoke to Director Li and a staff person named Lu. The police were there on the first floor. When Director Li demanded that she sign a statement promising not to practice Falun Gong, Ms. Dong said, “Is this what the talk is for? Then we are done.” She stood up and left.

Ms. Fan Jinqing (over 70) was arrested in the afternoon on September 22, 2020, by two policemen from the Qizheng Police Station of Nangang District because she talked to people about Falun Dafa. Her home was ransacked that evening, and nothing was found. She was told that she would be released if she signed a statement promising not to practice Falun Gong and made a verbal statement as well. They said that if she refused, she would be detained for five days.

Ms. Fan was taken the next morning, on September 23, to the No. 2 Detention Center of Harbin, and was released on September 28. Her family paid the 500 yuan that was demanded by the police. No legal documents were presented during the entire process, including no home search permit, no detention notice, and no payment receipt.

Two police officers from the Pingxin Town Police Station of Pingfang District harassed Ms. Dong Yulan. They demanded that she sign a statement promising not to practice Falun Gong and videotaped her. They threatened her, saying that her refusal would affect her children’s education and employment.

On September 24, Liu Bo, director of the Guotanghu Residential Committee, Baoshenghu Street of Yubei District, led staff members to harass Ms. Gong Xiangfen at her home. Ms. Gong was pressured to sign a statement promising not to practice Falun Gong, which she firmly refused. They asked her husband to sign on her behalf, which he also refused.

On September 24, Ms. Liu Shuyun's son received a call from the police asking him to sign a statement promising not to practice Falun Gong on behalf of his mother, which he refused. They threatened him with his children’s future.

Around mid-September, a police officer came to Ms. Zhao Tianxia’s home. He asked her if she still practiced Falun Gong and ordered her not to go out to practice. Ms. Zhao asked why they would expect an over-80-year-old woman like her to go anywhere. The police officer left then.

Mr. Liang Yi was arrested on the afternoon of September 29 by police from the Yu Jiatou Police Station. His daughter who studied and resided at school, received a call from the police after midnight that evening, asking her to cooperate with a home search.

Mr. Liang was transferred to the Shouyi Road Police Station on September 30. On the same day, his office at work was searched and several belongings, including his cellphone, a USB, and an electric bike key, were confiscated. That afternoon, his home was searched, but nothing was found.

Mr. Tian Dejun was sentenced to three and a half years in prison in September 2020.

Mr. Liao Xiaoping was harassed at home in the morning on September 15 by four people, including the deputy director of Chengbei Town, two staff members from the Chengbei Town Comprehensive Management Office, and a local policeman. They took out three statements and demanded that he copy them and sign them. After he refused, they forced his family member to copy them. Then they forced him to sign them and press his fingerprints as well.

Also on September 15, Ms. Xie Guofen was harassed by two people from the Comprehensive Management Office of Bingcun Town and the local police station.

“Clarifying the Truth on Social Networks during the Pandemic Lockdown”