(Minghui.org) On October 3, German Unity Day, Falun Dafa practitioners from Germany, Switzerland, and Austria held activities in multiple cities around Lake Constance. Known as “Bodensee” in German, the lake is situated on the border of three countries on the Rhine and at the foot of the Alps. Through the events, practitioners introduced Falun Dafa to a wider audience and raised awareness of the terrible persecution of Dafa in China.

A national holiday, Unity Day commemorates the reunification of East and West Germany 30 years ago in 1990 when communism was abandoned in the former East Germany. Passersby stopped to read the information about Falun Dafa and speak with practitioners. Many signed a petition calling for an end to the persecution and encouraged practitioners to keep up their efforts.

Practitioners held events in six cities in Germany (Lindau, Meersburg, Überlingen, Radolfzell, Konstanz, and Bodeman-Ludwigshafen), three in Switzerland (Kreuzlingen, St.Gallen, and Arbon), and several in other towns near the lake in Austria. 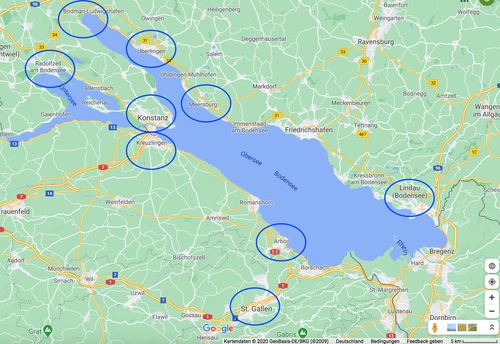 Practitioners held activities around Lake Constance on October 3, to draw attention to the persecution of Falun Dafa in China. 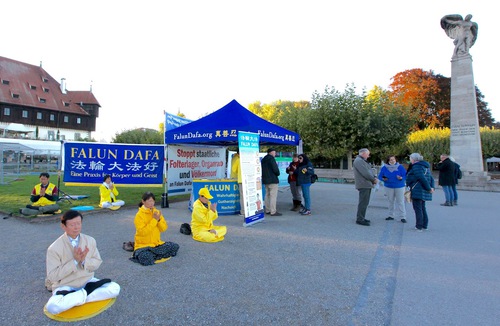 The booth in Konstanz (Constance), the largest city near the lake, was located near a landmark harbor.

Pascal Rapper Beck, an automation engineer from Switzerland, and his friends signed the petition. They read the posters showing images of the persecution in China. “Look at these photos—people are being arrested and detained simply for holding banners,” Mr. Beck said. “This is a severe violation of human rights and everyone should stand up and stop it. Otherwise, the brutality will harm all of us.”

Beck said the persecution of Falun Dafa by the Chinese Communist Party (CCP) was terrible. He remarked that people should cherish traditional values and said, “Civilization has lasted for thousands of years. If we lose it, we cannot easily recover it. For example, Chinese medicine. There is great wisdom there which has been passed down for generations.

“The CCP constantly lies and distorts history. Unfortunately, this has influenced the West, and people who hold conservative opinions are now being suppressed in other countries, including Germany. If we do not take action to stop this, we may become a totalitarian country, too,” he said.

Local resident Christel Lotter and her friends also signed the petition calling for an end to the persecution in China. “I remember reading an article in the 1990s on illegal organ harvesting, taking organs without the person’s consent. And now it's happening again—we have to stop it.” Ms. Lotter was referring to the CCP harvesting organs from prisoners of conscience, the majority of whom are persecuted Falun Dafa practitioners. She said that more petitions would continue to raise awareness among the general public and people would urge government officials to act.

Bodeman-Ludwigshafen: “You Are Doing This for Every One of Us” 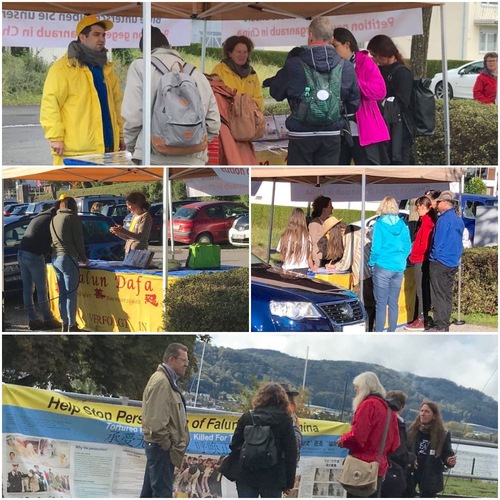 Practitioners talk to the public in Bodeman-Ludwigshafen, Germany

A woman from Berlin said she had seen practitioners' events in Berlin and thought it was an important thing for practitioners to do. She said she had already read some information about the persecution in China, including forced organ harvesting from Falun Dafa practitioners. She hoped to get more materials and place them in her company.

Another woman thanked practitioners for their efforts and said, “This is very important. I think you are doing this for every one of us.”

Interested in the exercises, two women began to learn them from the practitioners. One checked the falundafa.org website and found an exercise site nearby.

After signing the petition condemning the persecution, one person returned with three more people. All of them wanted to practice Falun Dafa and asked if there were group exercise locations near where they lived.

A couple stopped at the booth. The husband said he’d signed a petition in Frankfurt, but the wife had not. While the wife signed, they chatted with practitioners and learned more about Falun Dafa and the situation in China. The couple thanked the practitioners before they left. 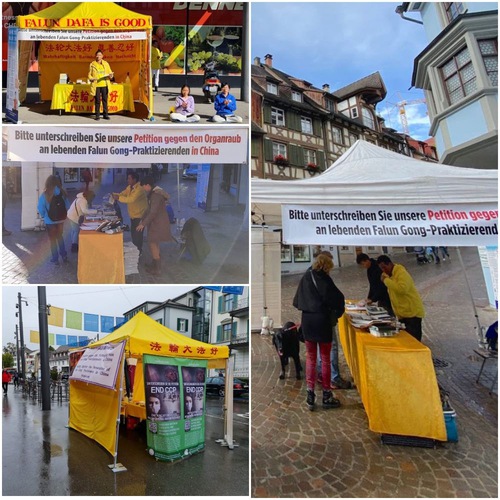 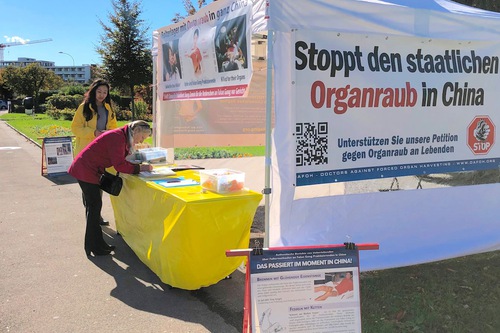 A passerby signs the petition in Arbon, Switzerland.

Many pedestrians in Arbon, Switzerland were shocked to learn of the mistreatment practitioners are suffering in China for their belief. “It is hard to believe things like this can be happening in the world today,” one person commented. Several people signed the petition and said they hoped the tragedy ends soon.

A man from Switzerland told the practitioners that he'd attended a film screening about the persecution in China several years ago. “I was very surprised because I did not know something so cruel could happen in China,” he said.

He signed the petition and encouraged his friend to sign, too. “Several years have passed. It's too bad the persecution hasn't ended yet,” he said. “I hope it will end soon.”

““The Amazing Power of Falun Dafa Changed My Life!””