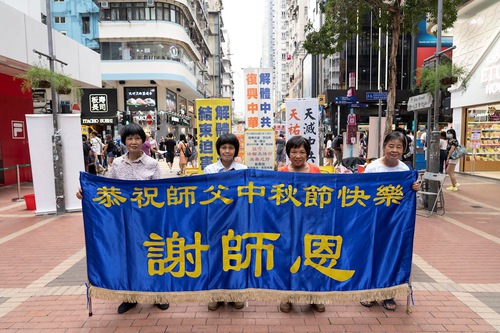 Ever since the Chinese Communist Party (CCP) passed the National Security Law in Hong Kong this July 1st, the people in Hong Kong have felt increased anxiety and uncertainty. Falun Dafa practitioners did not give in despite the pressure. They persisted in clarifying the truth about the persecution, displayed banners with the message, “Heaven Will Eliminate the CCP” and “Falun Dafa is Good.” They handed out information and explained the situation in China to people misled by the Chinese Communist regime’s defamatory propaganda. They also helped people withdraw from the CCP and its affiliated organizations. 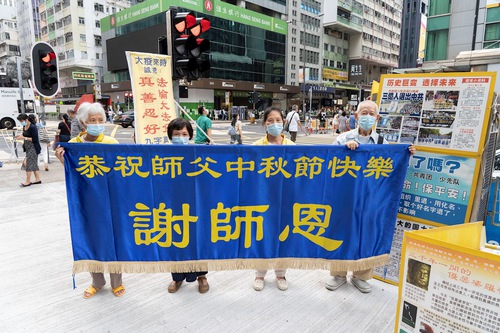 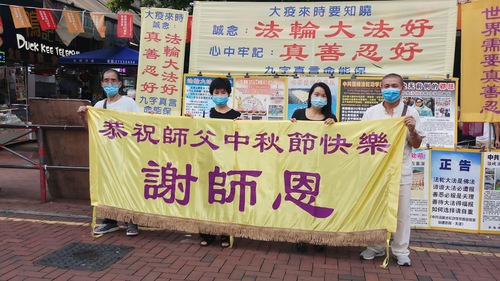 Ms. Zhen has been clarifying the truth in Mong Kok every day. She had only practiced Falun Dafa for a few months when the CPP launched the persecution in July 1999. She was frightened and uncertain in the beginning. She told herself, “Falun Dafa teaches Truthfulness-Compassion-Forbearance. Since Dafa shows me how to be a better person, it must be righteous.” She decided to continue practicing and began clarifying the truth to people.

On August 1, 2008, she started to talk to people on Soy Street in Mong Kok with another fellow practitioner. They distributed truth-clarifying information such as the Nine Commentaries on the Communist Party and Minghui Weekly to tourists from China. They overcame a lot of difficulties including balancing work and facing the pro-CCP groups’ constant bullying.

After July 1st this year, the CCP extended the persecution to Hong Kong. The pro-CCP groups harassed them almost every day. Sometimes, they destroyed the banners or display boards six times a day. Ms. Zhen said many Hong Kong people were worried about their safety and reminded them to be careful and protect themselves. She refused to give up and continued talking to people on the street.

Recalling the last 21 years she said, “Whenever I felt it was overwhelming I thought of the practitioners in China. They persisted despite unbelievable hardships. We hope everyone can know the evil nature of the CCP and stay away from it.”

Mrs. Qi said she would not give up no matter how dangerous the environment became. She said she became a better person and let go of many attachments after she began practicing Falun Dafa. She wanted more people to know how wonderful Falun Dafa is.

The persistence and courage of Hong Kong Falun Dafa practitioners throughout the years has won the admiration and support of many Hong Kong people. Several people sent Mid-Autumn Festival greetings to Mr. Li Hongzhi. 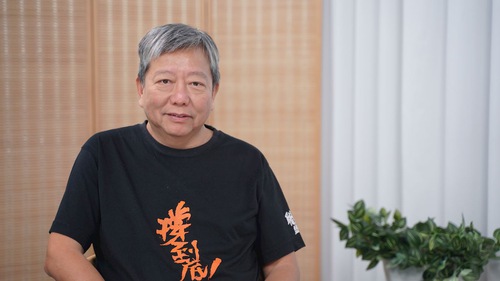 Mr. Lee, chairman of the Hong Kong Alliance in Support of Patriotic Democratic Movements in China, wished Mr. Li Hongzhi a Happy Mid-Autumn Festival. He said that the festival is a day of reunion. He's concerned about the human rights activists' situation in China and hopes everyone can enjoy time with their families.

He said he was touched by practitioners’ persistence for so many years. He said that practitioners encourage many people, even though they stand alone. Many times no one will speak to them, and the CCP arranges thugs to attack them. Despite the intense challenges you can see practitioners in many parts of Hong Kong talking to people about the persecution. Their spirit encourages everyone.

He said, “The protest groups in Hong Kong should learn from Falun Dafa practitioners. They truly follow their belief in Truthfulness-Compassion-Forbearance. We should support them and join our efforts to make China better. We hope they can freely practice again in China. 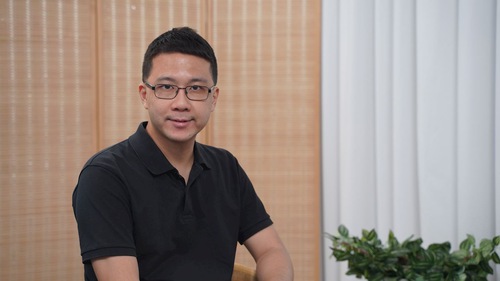 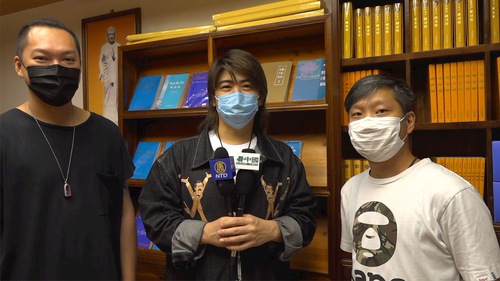