(Minghui.org) As Dafa is being learned by people from throughout the world, people of all races are benefiting from it. The western Falun Dafa practitioners follow the principles of Dafa, “Truthfulness, Compassion and Forbearance” in their daily lives. Thus, they benefit physically and mentally, and have a more harmonious family life.

Many German Falun Dafa practitioners understand that the Mid-Autumn festival is a traditional Chinese family festival. Therefore, practitioners from three German families talked about how their family members become more and more harmonious ever since they started on their Dafa cultivation path. They also wish that more people could experience the preciousness and power of Dafa. 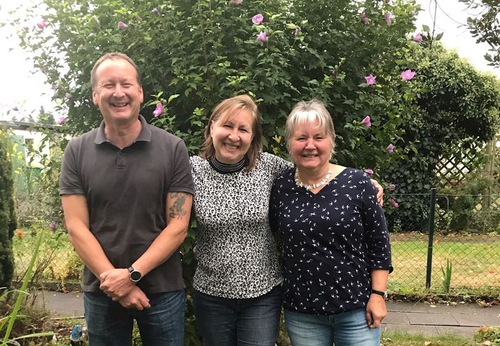 (From left to right) Werner, Ursula and Karin are siblings who cultivate in Dafa.

The three siblings have their own family and each one has a job. Karin is a civil servant, Ursula works in a chemical lab, while Werner works in the support department of a university.

Ursula said that because of Dafa her family life became more harmonious, “The three of us used to hold onto our own opinion. However, because of cultivation, we are able to first look within to see what problems do we have when we are of a different opinion. Sometimes, we will hear about, or see the children from other families argue and fight over the unfair distribution of the family wealth and property. However, the three of us are not like that. Because of studying the Fa, we understand that we should not hold onto our wants and desires. If there are any benefits, we will let the other sibling have them.”

Ursula, given her cultivation, realized that she was jealous of her younger brother. She could finally let go, and now has a harmonious relationship with him.

She continued, “When I obtained the Fa, the 3 of us were already over 40 years old, no longer lived with our parents, and had our own working lives and family. I always thought that I had let go of my jealousy as we got older. However, once when our parents complimented Werner, I was thinking just as I did in the past, “Him again, everything that is good is always related to him.”

Now, I am more alert to my thoughts. Due to studying the Fa, I realized that when I see my brother being complimented by my parents, instead of being happy for him, my heart does not feel comfortable. Isn't this the jealousy that Master has been talking about? This time, I realized that I still have that jealousy element in me. When I compared the issue to the Fa-principles I realized that I have always been comparing myself with Werner, and I even kept comparing the treatment by my parents of my husband and Werner's wife. When I discovered that this jealousy was still haunting me, I consciously eliminated it. Thus, the relationship between me and Werner became very harmonious.”

“Thank you Master for giving us the chance to let us cultivate in Dafa, which benefited our family greatly. On mid-autumn day, this Chinese traditional family festival, the three of us will express our gratitude to our Master.” 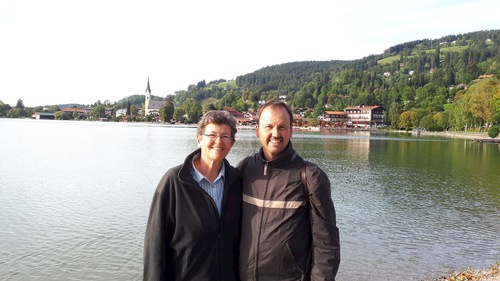 Andrea and Richard have been married for 10 years. Andrea works in the education industry while Richard works as a civil servant. Andrea started practicing Falun Dafa before the start of the persecution was launched in China.

Richard was born into a traditional Christian family. When the two met, Richard discovered that Andrea would go to a small park in the city to practice the exercises every week – rain or shine. On her return home she seemed to be very happy. Thus, he became curious and wanted to find out more about Falun Dafa. With Andrea's help, Richard started to read Zhuan Falun. He said, “I felt that Zhuan Falun was incredible. It answered many of the questions, and even more then I had learned from Christianity. Therefore, I decided to practice in Falun Dafa.”

After getting married, Andrea discovered that Richard seemed to be more sad when he was at his mother's place. When Richard noticed that his mother's thoughts and behavior were not appropriate, he tried to reason with her. But, his mother did not want to listen and even said, “I have always been doing it like that.” Because of such conflicts, Richard would often get really angry, and this made Andrea sad.

After studying the principles of Falun Dafa, this situation finally improved. Andrea recalled, “Once when we were studying the Fa and exchanging our thoughts, we realized that Master only looks at the good side of us. In that case, why do we keep looking at the bad side of Richard's mother? We realized that Master treated us with compassion, and we should also use a similar approach to treat the people around us. Since then, when we visit Richard's mother, we try our best to look at her good side, even when she is disagreeing with us. Slowly, Richard became more and more composed. Now, neither one of us will get angry, and we even discovered that there are many cute sides to Richard's mother.“

“We wish Master Happy Mid-Autumn Festival. Thank you Master for his benevolent saving!”

Believing in Master’s Arrangement: Not Worry About one's Gains and Losses 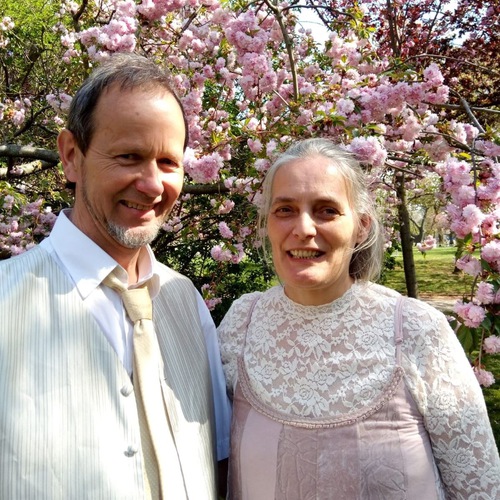 Ingrid and Walter met during a Falun Dafa practitioners' cultivation exchange conference in 2019. Not long after getting married, Walter moved to the city that Ingrid is living in. Ingrid works in the education industry while Walter is setting up a business in the new city.

Ingrid said, “Both of us are cultivators, but our characters are totally different. When I make decisions, I am more rational. I will often look at the benefits of a plan and compare the pros and cons before making a decision. However, Walter is a more emotional person. He will do something when he feels that it is good. When our opinions are different, I will let him tell me the reason, but he will only say that he felt that this way feels quite good. However, I felt that this is not enough to convince me. Therefore, sometimes we will argue about it.”

Recently, with regards to looking for a house, the conflict between the two became very obvious. After Walter moved to Ingrid's apartment, they realized that they would need a bigger apartment. However, after looking at a few apartments, they could not agree as to what was suitable.

She continued, “We are both cultivators, and we understand that we need to put ourselves in the shoes of others. Therefore, the both of us are prepared to take a step back and stay in the apartment that the other party liked. However, when we went for a walk, we saw an apartment that was put up for rent and both of us felt that it is very suitable. Furthermore, we knew the house owner, who was willing to rent us the apartment.”

“Dafa brought us together. Our family thanks Master for his benevolent saving and we wish Master a Happy Mid-Autumn Festival!”