(Minghui.org) Despite the cold, rainy weather, Falun Gong practitioners in Sweden held activities outside of the Stockholm Concert Hall on October 10, 2020, to expose the Chinese Communist Party’s (CCP) persecution.

The concert hall is a must-see for tourists because it’s the venue for the Nobel Prize Award Ceremony. Many people learned about Falun Gong and signed a petition calling for an end to the CCP’s persecution during the event. 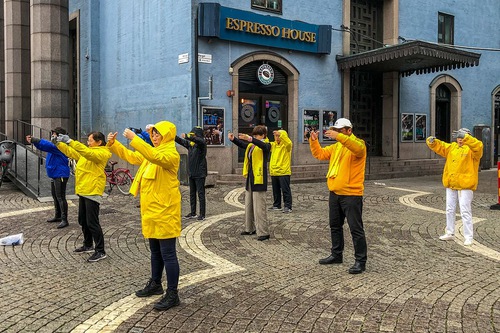 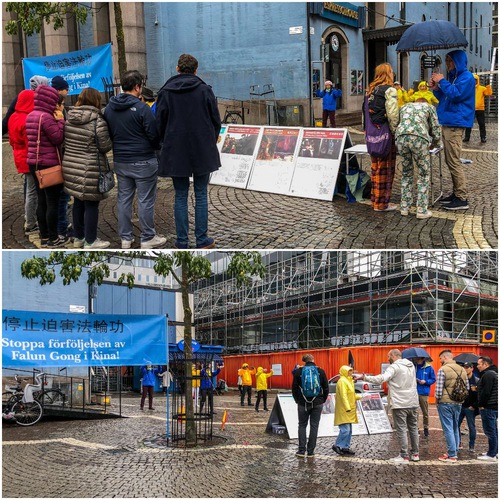 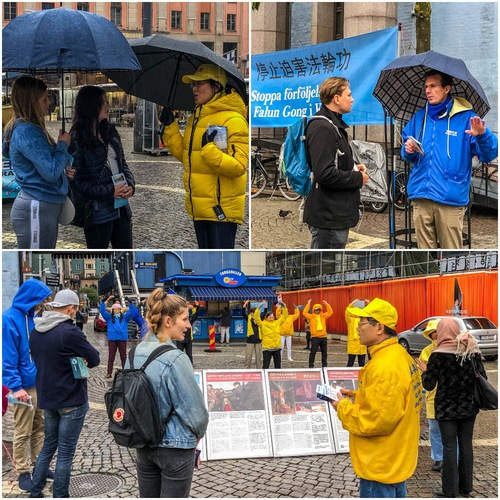 Passersby stop to read the Falun Gong display boards and ask for more detailed information about the cultivation practice.

A woman named Anja took a brochure as she passed practitioners, and returned soon after. She said, “I heard about this a long time ago. I would like to do something to help you.” She was touched by the practitioners’ determination to expose the persecution despite the rain. “You are here to help more people see the evil nature of the CCP. What you are doing is right! I must support you!” 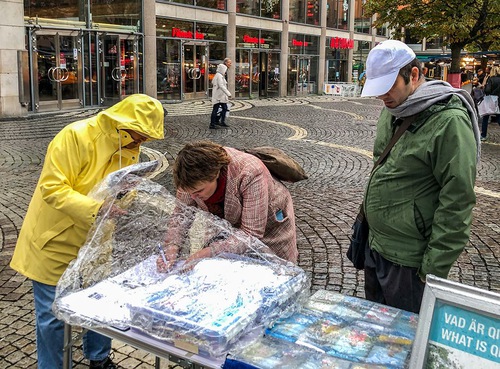 After signing the petition, Anja said, “It’s every person’s responsibility to cooperate with each other and stop this horrendous crime!”

A retired woman told a practitioner, “I am fully aware of the atrocities. I worked for many years at the Swedish Consulate in Hong Kong. The CCP promised not to change Hong Kong for 50 years, but it hasn’t been half that time and Hong Kong is already on the verge of being controlled by the CCP. You can’t believe a single word uttered by those involved with the CCP—they are lies.”

A woman from South America was angered by the CCP’s persecution. She said, “I know about the CCP’s persecution. They are so cruel. They have indeed done many wicked things against humanity and against Heaven and Earth. They don’t have the least bit of respect for people. I’ll pray for you and tell my friends about it.”

A mother and her son were appalled by the CCP’s organ harvesting from living practitioners. The mother said, “The CCP’s dictatorship has treated the people cruelly! It’s so evil! It must stop!” Both the woman and her son signed the petition.

A man approached practitioners, introduced himself, and told them his personal experience. “I have been interested in Chinese culture and visited China many times over the past 25 years. I have been to Tibet and made many friends. I saw clearly the evil nature of the autocratic Chinese government. They can’t possibly accept people of belief. The Chinese Embassy has denied me a visa for entry into China.” He strongly condemned the CCP and said that he supported Falun Gong and other groups of Chinese people suffering under the CCP’s suppression.