(Minghui.org) Falun Dafa practitioners in France organized several activities in their cities as fall approached, to introduce the peaceful practice, inform people of the over 360 million Chinese people who have already quit the Communist Party (CCP), and help Chinese residents and tourists to withdraw their membership in the Party.

As the number of people contracting the CCP virus (coronavirus) recently began to increase in Europe, many are gradually seeing the true nature of the CCP. Referring to how the CCP forcefully harvests organs from living people for huge profits, a Frenchman in Belleville commented that, “The Communist party is a demon. Only demons would do such an inhuman thing!” 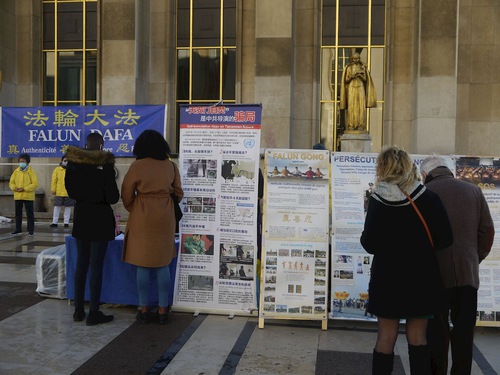 Every weekend practitioners hold activities at the Human Rights Plaza in Paris. 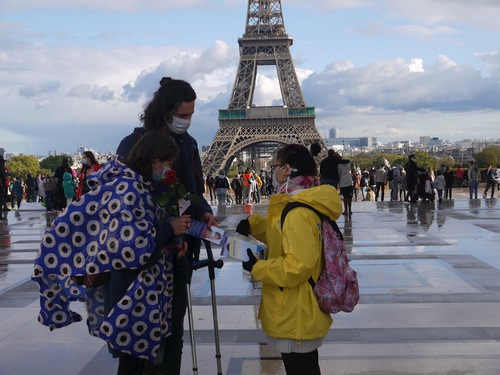 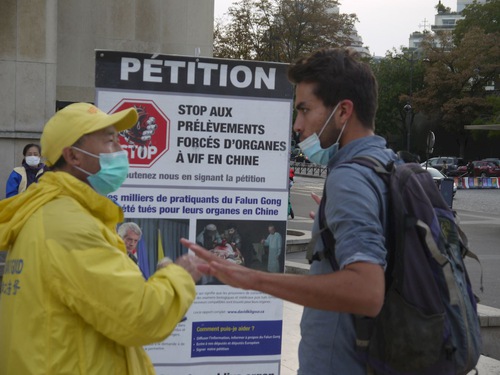 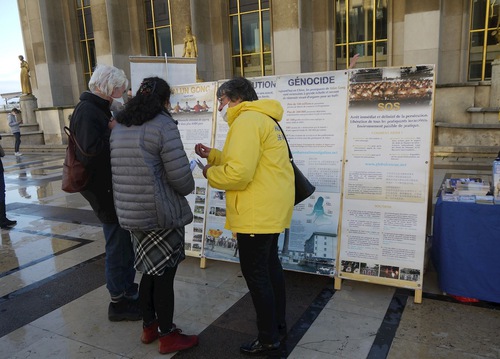 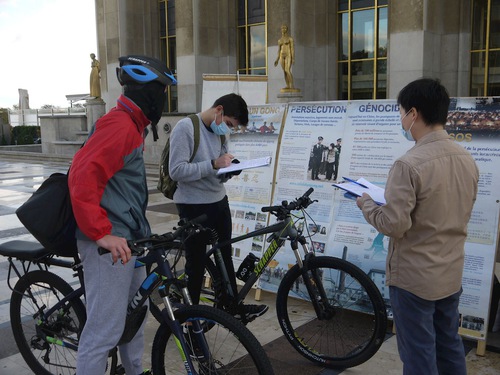 Tourists sign a petition to help end the persecution.

“The CCP robs Chinese people of their freedom”

Every Sunday afternoon, practitioners demonstrate the exercises at the Human Rights Plaza in Paris. They also tell people about the persecution in China.

Thibaut, a member of a veterinary group, came to the plaza on October 11. He signed the petition and said that the CCP robs Chinese people of their freedom and its political system is problematic.

He said he doesn’t trust the Chinese government because it censors information, controls the Internet in China, and spreads false information about the coronavirus. “The CCP is a suppressive political system. It restricts the Chinese people’s freedom of thought,” he said.

As a social worker, Celia was very upset to learn that Falun Dafa practitioners are persecuted and even had their organs forcefully taken by the CCP for profit.

She said, “The world has given the Chinese Communist Party too much power so it can do this. France condemned what Turkey did to the Armenians. Why don’t they condemn the CCP’s inhumanity crimes? They must have some political and economical interest in it.”

Belleville Paris: “See the future by learning from history”

Practitioners hold activities at Belleville in Paris every Saturday afternoon. After hearing about the ongoing persecution in China, Stephane, a historian, said, “I am very sad. We live in total hypocrisy. The French media reports happenings from other countries but ignores China. This is hypocrisy.”

There is a Chinese quarter in Belleville. Many Chinese store owners and restaurant workers have quit the CCP and it’s affiliated organizations.

“My name is Freedom of Speech. I am against the Communist Party!”

One man talked to a practitioner for a long time. He said that the Chinese regime is totalitarianism. “It’s a false democracy. It’s a one-party dictatorship,” he said.

He knows that Chinese people and many minorities are persecuted. “Anyone who is not in step with Beijing or is not brainwashed by the red communism, will be warned or labeled. No one has freedom of speech or freedom of thought at any time,” he said.

He said that the tearing down of the Berlin Wall will come to China and people are waiting for this historic turning point.

“My name is Freedom of Speech. I am against the Communist party!” he exclaimed.

Guadeloupe: Learning about Falun Dafa at a Caribbean Resort

Located in the French Caribbean, Saint-Félix Beach in Guadeloupe attracts both locals and tourists. People come to enjoy the beautiful beach and mangrove forest which is populated by many kinds of birds.

Falun Dafa practitioners hold informational events there every first Sunday of the month. 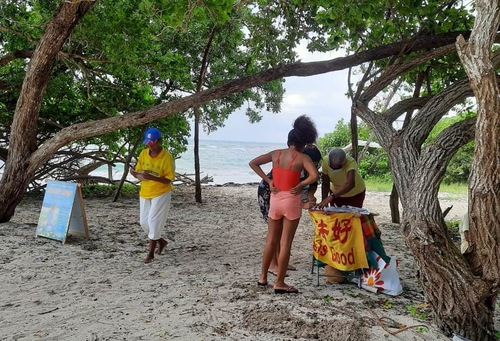 Practitioners hold an information day event at Saint-Félix beach in Guadeloupe every first Sunday of the month. 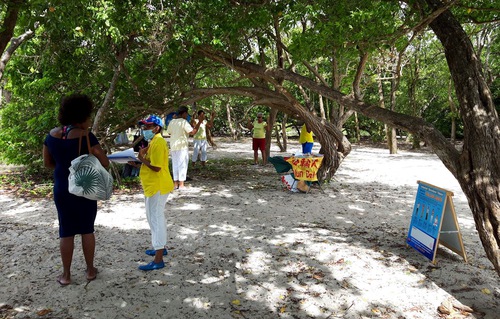 Many people already know about the persecution but are shocked to learn that the CCP harvests organs from Falun Dafa practitioners in China while they are still alive. Most people only know that Uighurs are persecuted.