Germany: Raising Awareness of the Persecution of Falun Gong in China

(Minghui.org) Falun Gong practitioners in Germany held activities in Berlin and Munich on October 1, 2020. The intent was to raise awareness of the Chinese Communist Party (CCP)’s crimes, such as persecuting Falun Gong (also called Falun Dafa) and killing practitioners for their organs. Practitioners also demonstrated the Falun Dafa exercises. They hope that people remain free from the CCP and the CCP virus (also known as the coronavirus). 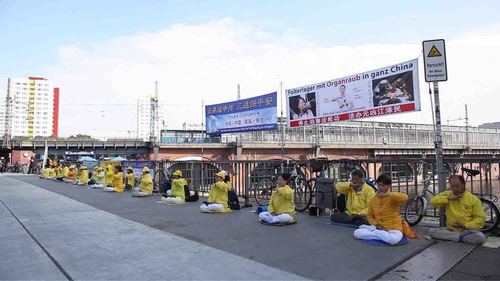 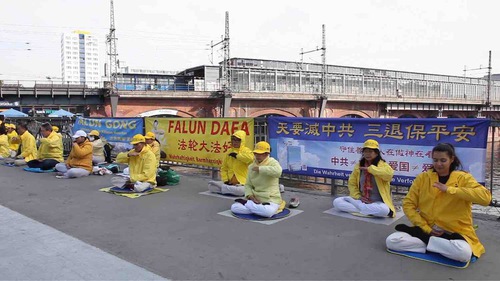 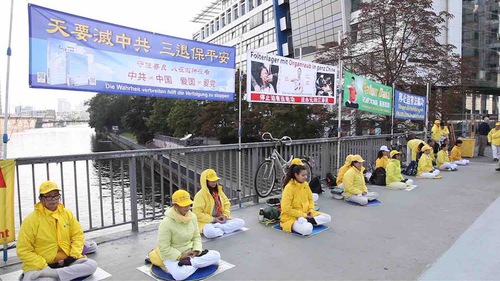 Practitioners doing the fifth exercise, a meditation, on the sidewalk across from the Chinese embassy in Berlin

Practitioners in Berlin sat in the lotus position on the sidewalk across from the Chinese embassy. They demonstrated the Falun Dafa exercises and told people about the cultivation practice. They also made people aware that the CCP has persecuted Falun Dafa for 21 years.

Michael Brand in Support of the Protesters

Other groups also demonstrated outside the Chinese embassy that day. They were protesting the CCP’s persecution of Chinese people who are members of their groups.

Michael Brand, a Member of Parliament and spokesperson for human rights affairs for the ruling party—the Christian Democratic Union—spoke to all the protesters.

He said, “In my eyes, you are the strong. You are Uyghurs, Tibetans, as well as Falun Dafa practitioners, Taiwanese, and Hongkongers, all who have been fighting for your rights. You are the particles of democratic movements. Let us fight together for freedom. This is the value that we share, and it will only become stronger. We’ll never give up our values.”

Ms. Liao Tianqi, the head of the Independent Chinese PEN Center, noted that October 3, German Unity Day, is a German national holiday. It commemorates German reunification, the day when people chose freedom and dignity for themselves, a special day in modern times. She said, “In contrast, October 1 is China’s National Day. It is the day when the CCP stole power from the Chinese people. It’s a day of shame and sadness.”

Interviewed by New Tang Dynasty Television, Ms. Liao said, “The situation is changing, given that many people came to protest today. The CCP shouldn’t regard itself as strong. It is not.”

Practitioners in Munich also held activities on the same day at Marien Platz, located in the city center. They demonstrated the exercises and talked to people about the CCP’s persecution as well as the practice of Falun Dafa. Their display boards and banners said, “Stay Away from the CCP and the Pandemic” and “Say No to the CCP,” reminding people not to ignore the CCP’s persecution of its own people for the sake of doing business with it. 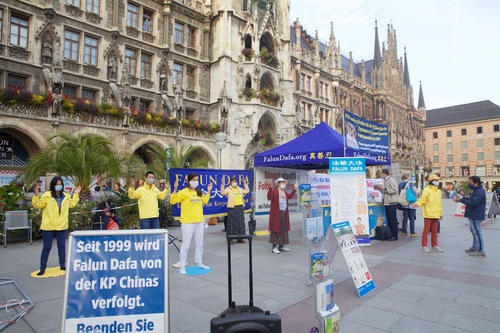 Practitioners in Munich held activities at Marien Platz on October 1. They demonstrated the exercises and raised awareness of the CCP’s persecution. 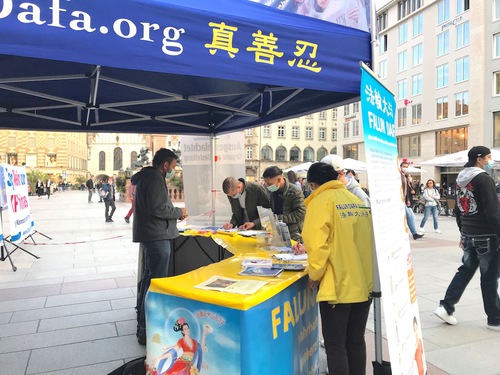 A group of young people signed the petition calling for an end to the CCP's killing of practitioners for their organs.

A businessman looked at the display boards, then talked to a practitioner. He learned that Falun Dafa adherents live by Truthfulness-Compassion-Forbearance, why the CCP is afraid of Falun Gong, why the CCP persecutes Falun Gong, and how terrible the persecution is. He also found out why people should stay away from the CCP and the CCP’s part in the epidemic (the CCP virus), which is spreading throughout the world, and much more. He then decided to sign the petition demanding that the CCP stop killing practitioners for their organs.

When the practitioner showed him the book How the Specter of Communism Is Ruling Our World, the man was interested and said he would read it. He thanked the practitioner for his detailed explanations and wished them all good luck.