(Minghui.org) Today's news from China includes incidents of persecution that took place in 22 cities or counties in 11 provinces, where at least 50 practitioners were recently persecuted for their belief. 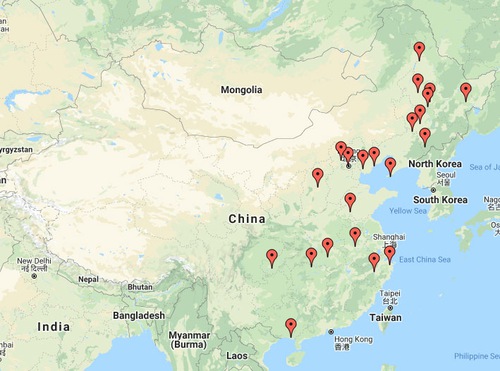 Ms. Zhou Na, Mr. Zhou Shaoshan, and Ms. Gao Jiping will be tried by the Wanbailin District Court at the Taiyuan City No. 1 Detention Center on the morning of September 24, 2020.

Ms. Qin Lianyu’s case will be heard for the second time by the Zhenhai Court at the No. 2 courtroom on September 24, 2020.

Ms. Shi Mengqiao from Tangxian Town, Yongkang City, will have her case heard in court again on September 27, 2020.

Ms. Shi was arrested in February 2020 for distributing Falun Gong materials. She was prosecuted by the Wucheng District Procuratorate. The first hearing was held in the Wucheng District Court from 2:50 p.m. to 5:00 p.m. on July 21. The verdict was not announced in court.

Ms. Cheng Zhichun, 78, was held in a forced labor camp for a year. She had been previously sentenced twice to prison, totaling seven years. When she was released in 2018, she was very weak. After studying the Fa and doing the exercises, her health quickly improved.

Ms. Cheng’s home was again ransacked on March 9, 2020. Due to the pandemic, she was temporarily released and returned home. She was notified by the police around September 17 that she was officially arrested by the Tiexi Procuratorate. It was reported that her sentence was three to five years in prison, and it would be executed after October 1.

Due to consecutive rounds of persecution, elderly Ms. Cheng has endured great mental pressure. She is now weak and in poor health.

Mr. Wang Qing, Ms. Xiao Yanfang, Ms. Shu Yunlan, Mr. Liu Yibo, and Ms. Wang Yan were arrested by officers from the Ma’an township Police Station when they were talking to people about Falun Gong in Ma’an Township on the evening of April 26, 2020. They were released the following day due to the pandemic.

The Hanchuan City Domestic Security Division delivered “residential surveillance notices” to the five practitioners on May 19.

On September 21, the five practitioners were notified to go to the Procuratorate on September 23.

Three people from the Lianzhou Town Comprehensive Management Office went to Ms. Li Jiaxiu’s home and told her to sign a guarantee statement renouncing Falun Gong on September 16, 2020. They threatened her that if she did not sign, it would adversely impact her son’s work and grandson’s schooling. Ms. Li refused.

Two people went to Ms. Zhong Lanying’s home for harassment on September 13, 2020. Ms. Zhong did not let them in. When one began photographing her, she stopped him.

Ms. Wang Kezhen and another practitioner were arrested by officers from the Yaohai District Domestic Security Division and the Dongqi Police Station when they left an elderly practitioner's home on September 3, 2020.

The next day they were taken to the hospital for a mandatory comprehensive physical examination, including gathering DNA blood samples and oral mucosal fluid. Ms. Wang is being held in the Hefei City Women's Detention Center for 30 days of detention. The other practitioner was detained for 10 days. She has returned home.

Ms. Cang Fengying’s husband in Shuangcheng District received a phone call from the Changsheng Residential Community on September 19, 2020. He was asked if Ms. Cang was still practicing Falun Gong. He was told to have Ms. Cang go to the community office immediately to sign guarantee statements renouncing Falun Gong. Otherwise, his low income subsidy would be suspended. Ms. Cang did not go. Ms. Cang’s husband received a text message, on September 20, from the community, saying, “Your low income subsidy has been suspended.”

Ms. Cang and her husband are in their 60s and have no children. Both of them have no pensions, and rely entirely on the minimum subsidy of a few hundred yuan to survive. The husband is also seriously ill.

Officers from the Sanyou Police Station went to the homes of Ms. Zhang Chunzhi and Ms. Zhou Xiangbin for harassment on September 10, 2020. Ms. Zhang told them the facts about Falun Gong, and then they left.

The officers went to Ms. Meng Fanlan’s home for harassment on September 11. Ms. Meng had moved, and they did not see anyone there. They later called and harassed her husband, son, and daughter-in-law.

The officers went to the homes of Ms. Zhu Xirong, Ms. Zhang Shuyun, and Ms. Zhang Yongqing for harassment in mid September.

Two officers from the Nanyan Police Station went to Ms. Lu Jiping’s home and harassed her on September 16. Ignoring the two-month-old infant in the home, they repeatedly asked her loudly, “Do you still practice Falun Gong?”

Ms. Zhang Liping was arrested on August 19, 2020. The home of Ms. Lin, who was often with Ms. Zhang, was ransacked by the police. Ms. Lin’s whereabouts are unknown. The police confiscated a lot of personal belongings from Ms. Zhang’s home.

Elderly Ms. Wang Liqing was arrested on September 5, 2020. Her home was ransacked.

Practitioners in Jiamusi City who stayed in touch with Ms. Zhang Liping were arrested by officers in the Qitaihe area.

They asked Liu Bin (principal of Tiedong School) to take Mr. Wang Chengdong (a teacher) to the police station, and pressure Mr. Wang to sign the three statements renouncing Falun Gong. They tried for half an hour to “transform” Mr. Wang. Mr. Wang refused to sign anything.

The Political and Legal Affairs Committee personnel then threatened the Education Bureau to come up with an administrative punishment plan.

That afternoon, the principal and the school Party secretary talked to Mr. Wang for most of the afternoon. They said that the Education Bureau notified the Personnel Bureau in accordance with the “Public Institution Punishment Regulations” that Mr. Wang would soon be fired.

Two police officers knocked on Ms. Liu Changchun’s door and said they were there to check the electricity on the morning of September 17, 2020.

Ms. Xu Yanqiu from Guce Village, Chengguan Town, Fangshan District, was arrested by five police officers on September 17, 2020. Her home was ransacked and her Falun Dafa books were confiscated.

Mr. Zou Jikai from Xinhua Village, Qingdui Town, Zhuanghe City, was arrested by the Zhuanghe City police on the morning of September 21, 2020.

Ms. Zhang Xiuyun was reported to the police when she was posting Falun Gong materials on September 14, 2020. She was arrested and was taken to a detention center. Her son is being held in prison. His wife divorced him. The police confiscated her Falun Dafa books, photos of the founder of Falun Gong, and Falun Gong materials.

Ms. Liu Jingxiu was arrested on August 6, 2020. Due to health reasons, she was taken back and forth to the hospital and the police station. After spending more than 20,000 yuan for treatment without any effect, the police brought her back to the police station on September 16. She was released on the evening of September 19.

Ms. Huo Yuping from Zhiwu Village, Changzhuang Township, Fengrun District, was harassed by the village women's director on September 14, 2020. The women's director persuaded her to give up her belief for the sake of her child and to say things against Falun Dafa.

Three officers from the Changzhuang Township Police Station went to her home and harassed her on September 15. They demanded she say something insulting about the founder of Falun Gong. She refused. They ransacked her home and confiscated two Falun Gong informational calendars and printed materials.

Five officers from the Nongfeng Town Police Station, Shuangcheng District, went to the homes of Mr. He Zhinian, 77, and Mr. Wang Shili, in his 70s, and arrested them on September 19, 2020. They confiscated Falun Dafa books and photos of the founder of Falun Gong.

Xiong Wenhua, secretary of the county Political and Legal Affairs Committee, and police officers broke into Mr. Zhao Changyin’s home and ransacked it on September 17, 2020. They confiscated a computer, a printer, and Falun Dafa books. Mr. Zhao was taken to the Changde Brainwashing Center.

On the same day, they went to Ms. He Fuxiu’s home and ransacked the place. They confiscated a computer, a printer, and printed materials. They took both of Ms. He’s grandson’s computers. They also arrested Ms. Zeng Xiaolin. Both practitioners were taken to the brainwashing center.

Ms. Zhou Donglian and Ms. Xiong Ruilian were taken to the brainwashing center on the afternoon of September 18.

Liu Jun, a residential police officer from the Huifeng Police Station, Jiancaoping District, phoned Ms. Liu Rong on September 17, 2020, and insisted she go to the police station. When she arrived, the police told her to sign the three statements. She refused.

Ms. Peng Xia was again arrested, and has been held in the Dahuangzhuang Town Brainwashing Center for eleven days.

Ms. Hou Chengfu, 68, was arrested while posting Falun Gong materials in Zoucheng City on the afternoon of September 15, 2020. She was taken to the police station, where the officers forcibly took blood examples and fingerprints from her. The officers also cut her hair. The police phoned her son to come and pick her up the next day.

Officers from the Minzhu Police Station, Zhaozhou County, called Ms. Liu Yueqin’s husband and their child, who is over 30 years old, separately on September 17, 2020.

Ms. Yu Xia from Wenhua Village, Xiejiawan Sub-district, Jiulongpo District, was arrested by village committee personnel and the police in August 2020. They attempted to force her to give up Falun Gong. She is being detained. The facility where she is being held is not known.

“Using Every Opportunity To Save People during The CCP Virus Pandemic”