(Minghui.org) For helping his sister from the domestic violence she was suffering at the hands of her husband, Mr. Chen Dicai was reported by his brother-in-law for practicing Falun Gong. Mr. Chen was recently sentenced to seven years and is now awaiting the appeal hearing at Lufenglieshan No.1 Detention Center, where he has been held since his arrest over a year ago.

Mr. Chen, a 38-year-old Huangshi City, Hubei Province resident, received a call from his niece on the evening of July 3, 2019. She was seeking help from Mr. Chen as her father, who has lived with his mistress for six years, was beating her mother.

Mr. Chen rushed to his sister’s home. She was very weak and exhausted. Some of her hair that was pulled out by her husband scattered on the floor. She was unable to move and rested in bed.

Mr. Chen argued with his brother-in-law, Li Shengshui, for beating his sister, only to see Li call the police and report Mr. Chen for practicing Falun Gong. The police came around 11 p.m. and brought Mr. Chen and his sister’s family to the police station.

Upon body searching Mr. Chen and finding some materials with information about Falun Gong, the officers reported Mr. Chen to their supervisor at the Domestic Security Division that is in charge of persecuting Falun Gong.

Mr. Chen was held at a hotel near the police station for three days. The police interrogated him around the clock, deprived him of sleep, and didn’t provide him with any food or water. 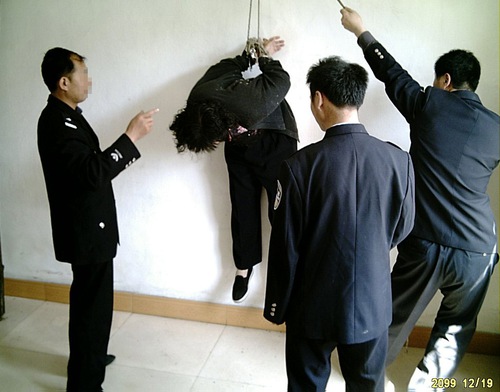 Torture illustration: handcuffed from the back

One officer named Ni Ge hung Mr. Chen on the window frame, with his arms pulled up from the back. The officer also tied up his hands from the back, and inserted water bottles between his hands and back to increase his suffering.

Unable to bear the torture, Mr. Chen was forced to bring the officers to search his residence on July 6. He was given 15 days of administrative detention on the next day and put on criminal detention on July 22. His arrest was approved on August 1. The police fabricated evidence and falsely accused him of having twenty printers and several flash drives that had information about Falun Gong.

Mr. Chen was tried by the Xisaishan Court through a video conference on September 22, 2020. His lawyer entered a not guilty plea for him. The judge sentenced him to seven years at the end of the trial.