(Minghui.org) Today's news from China includes incidents of persecution that took place in 17 cities or counties in 7 provinces, where at least 27 practitioners were recently persecuted for their belief. 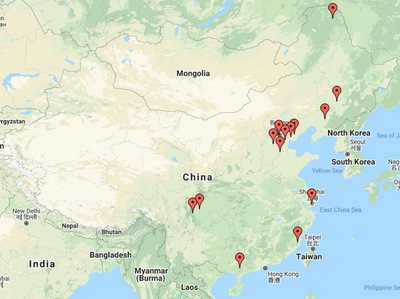 Ms. Wang Minghui was arrested on the evening of August 29, 2020. Twenty days after she was arrested her family went to the police and demanded her release. The police kept telling her family that during the investigation period, no visits were allowed. The family only knows that she is being held in the Tianquan Detention Center.

On September 18, the Domestic Security Division called her family to go there and sign paperwork. It turned out that they had to sign an arrest warrant.

Ms. Li, about 70, was also arrested on the evening of August 29, 2020. After being arrested she kept vomiting blood. The police finally told her son to pick her up.

Mr. Jiao Qingliang is from Miyun District, and his whereabouts are unknown.

Ms. Liu Jingxiu was arrested on August 6, 2020. She was brought back home by her family from the Nanguangchang Police Station on the evening of September 19.

The police took her to the hospital. The doctors said that she had high blood pressure and a brain tumor.

Ms. Wang Xiaohua and Ms. Li Guirong were reported to the police by two 15 or 16-year-old boys when the women talked to people about Falun Gong in Xiguan Village, Dongguang Town, on the morning of April 22, 2020. They were arrested by five SWAT team officers from the Chengqu Police Station in Dongguang Town.

Ms. Wang’s home was ransacked, and her Falun Dafa books, a tape recorder, and a computer were confiscated. Both practitioners were released that afternoon.

Ms. Wang and Ms. Zhu Yan were reported to the police when they distributed Falun Gong materials in Shijiaguandi Residential Community, Dongguang County, on July 24, 2020. Property personnel intercepted them and called 110 Response Unit. They were arrested by five or six officers. They were photographed at the residential community gate. They were taken to the Chengguan Town Police Station.

Both families went to the police station and demanded their release. Both practitioners returned home around 5 p.m.

Meng Deying, Jiang Fengming, and Dong from Beiguan Village Committee went to Ms. Wang’s home on the afternoon of September 3, 2020. They pressured her to write the guarantee statements, and insisted she cooperate with the order from county officials to be videotaped by the police. They kept harassing her for more than half an hour.

At the same time, Ms. Zhang Yuemei in Dongnanying Village, Dongguang Town, was harassed by the village committee personnel.

Ms. Wang Cuizhi, in her 80s, was arrested by officers from the Qian’an City Domestic Security Division on the morning of July 29, 2020, for talking to people about Falun Gong and distributing Falun Gong materials. She was questioned and told to sign paperwork. She refused. The police took her home after 10 p.m.

Without presenting any document, the police ransacked her home, and confiscated her Falun Dafa books and printed materials.

Ms. Hou Huifang, 75, and Ms. Guo Yuezhu from Xuhui District were recorded by surveillance cameras when they distributed Falun Gong materials at the end of March 2020. Both elderly practitioners were arrested at home by more than twelve officers from the Songjiang University Town Police Station around 7 p.m. the following day. All their Falun Dafa books and photos of the founder of Falun Gong were confiscated. Ms. Guo’s non-practitioner son was also arrested.

Both practitioners were released the next evening. Ms. Guo’s son was placed under administrative detention for 15 days. He was released on April 15. Later, the Shanghai City Police Department sent people who made a special trip to Huajing Town in Xuhui District to investigate whether Ms. Guo’s son practiced Falun Gong.

Mr. Li Wenhe from Daxinzhuang Village, Xiantai Township, Jingxiu District, was harassed at home by Zhao Jianli, deputy Party secretary of the village, on the afternoon of September 7, 2020. He was told to sign paperwork. He immediately refused.

Ms. Li Weiping from Jin’an District was again arrested at home by officers from the Yuefeng Police Station on July 14, 2020. She was taken to the Minqing County Detention Center for quarantine. Fourteen days later she was transferred to the Fuzhou City No.2 Detention Center. Thirty days passed but the family did not received any notice.

Ms. Li’s husband called the police station on August 21, and learned that she was officially arrested by the Jin’an District Procuratorate on August 21.

Ms. Li’s family entrusted a lawyer to meet with her in the detention center on September 3.

Three officers from the Gaogezhuang Police Station went to Ms. Gao Chunling’s home in Da’anlezhuang Village on the morning of September 18, 2020. While one officer videotaped, another officer asked if she still practiced Falun Gong. Ms. Gao said, “Such a great practice, of course I do.” They left.

Ms. Tang Yuanzhen and Ms. He were followed and arrested by officers from the Qinglong Police Station on July 25, 2020. Their homes were ransacked and their Falun Dafa books were confiscated. They were interrogated at the police station, and released that evening.

Mr. Tan Jiren, Md. Wu Huiqiong, and Mr. Qiu Shaolin were arrested in April, May, and July 2020. They have been held in a detention, where they were forced to “transform,” and write guarantee statements.

Ms. He Pinqin, in her 70s, from Minhang District, was arrested by officers from the Bijiang Police Station on September 8, 2019, when she phoned others to tell them about Falun Gong. She was held in the Fengxian Detention Center for 30 days. She was released on bail on October 8, 2019.

She was arrested at home on August 27, 2020. It was learned that she was to face trial. The date is pending.

Currently, except for Mr. Zheng who has returned home, the other three practitioners’ whereabouts are unclear.

Ms. Wang Lihua will be tried by the Beichen District Court on September 23, 2020.

Tian Bolin, a police officer from the Hanjia Garden Industry Bureau, and other people went to Ms. Xia Xiumei’s home on the morning of January 30, 2020, and demanded that her husband sign paperwork. Her husband signed without reading the contents.

Song Yu, head of the Domestic Security Division in Hanjia Garden Industry Bureau, called Ms. Xia’s husband one morning at the end of July 2020, and told him to go to a detention center.

Lu Chuanguo, secretary of the Political and Legal Affairs Committee, and Song asked Ms. Xia’s husband to sign the guarantee statements. They also told him that if he signed the statements, he would receive a bonus and money. If he had difficulties, they would help resolve them. They also said that Ms. Xia was on the black list, and if he signed the statements, her name would be removed from the list, and they would not bother her any more. Ms. Xia’s husband refused to sign.

They were told to go to the police station to pick up their car impounded at the end of March 2020. Instead, the couple were arrested when they got there. They were taken to the Shenyang City No. 1 Detention Center and the Xinchengzi Detention Center respectively.

The couple were arrested by officers from the Xinchengzi Police Station on March 30, 2020. The officers ransacked the couple’s home, and confiscated three copies of Zhuan Falun, copies of the founder's lectures given at various regions, a printer, and all their printer paper. The police also impounded their car.

“Some Forms of Interference Are Hard to Detect”